Gallup recently reported that President Obama dipped to a low in his favorable/unfavorable ratings.  That news prompted this question: Is there a relationship between how much the president talks and his popularity?

This is a question worth answering because the answer might provide guidance about whether the electorate is paying attention and offer insight into an effective Republican campaign strategy.

Fortunately, the data and tools exist to answer the question.  This article summarizes such an exercise and its results.

The length of each speech, whether in minutes or words, is not available on the database; however, in this the age of the sound bite, the length of a speech seems less important than the appearance itself.  Therefore, the methodology used herein weights each speech equally and examines whether the president's speeches are related to his popularity.

The speech data was tabulated on a daily and cumulative basis and compared to popularity ratings.  Daily and cumulative speech measures were used to determine whether the public responds more to individual speeches or to the aggregate message of multiple speeches.  The data provided 593 observations of presidential approval/disapproval ratings and speeches/appearances.  This is an ample number of data points to establish statistical significance.

Correlation was calculated using Excel's @correl function.  The measure asks and answers whether there is a correlation between the president's talking and his ratings.  Admittedly, correlation is not the same as causation, as has been highlighted in the global warming debate.  In other words, it is possible that two variables are correlated but also that both are caused by a third unexamined factor.  That possibility is acknowledged but not evaluated herein.

Results.  There is a meaningful, negative 45% correlation between the president's cumulative speeches and his popularity over the November 2009 to current time period (593 data points).  More startling is the measure from May 2, 2011 forward (94 data points), at a negative 86% correlation.  The two relationships are shown below: 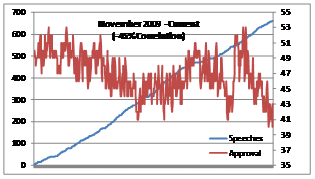 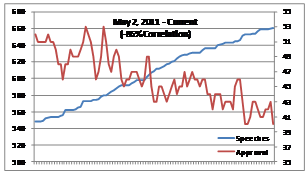 The fact that the long-term correlation (left graph) is negative and meaningful is contrary to the common description of the president as an effective speaker.  In reality, the more he talks, the less popular he becomes.  After 500+ remarks, speeches, and appearances, the public clearly does not like what it hears.  The Democrats elected their best golden-throated pitchman and the liberal product is stuck on the shelves.  Not even the man who claimed to be "a better speechwriter than my speechwriters" can sell liberalism.

The very strong, negative 86% correlation in the post-May 1 period (right graph) is notable.  One news event seems relevant to this trend -- that being the killing of Osama bin Laden on May 1, 2011.  This popular event occurred one day prior to a precipitous slide in presidential ratings.

This post-May 1 trend is stunning -- OBL was killed and the president's popularity collapsed in near-opposite lockstep with the number of his public appearances.  This fact suggests that the public demands positive results over spin and deems Mr. Obama's personal efforts bereft of such positive results.  It also suggests very little in the way of lasting public attribution to the president for the OBL event.

First, it appears that some of our president's vanity may be unfounded.  He's not so smart and we're not so dumb.

Second, Mr. Obama's speeches and his declining popularity in the post-OBL period are better-correlated than are CO2 and temperature in any period in the last 130 years.

Specifically, although the president's speeches both decrease his popularity rating and increase his unpopularity rating, since November 2009 the speeches are more negatively correlated with popularity (-45%) than they are positively correlated with unpopularity (+29%).  This implies that the president moves voters out of the supporter camp at a greater rate than he moves them into the detractor camp.  This seems consistent with movement being that of moderates, who move in small increments.

This should comfort those concerned that the public neither knows the real Barack Obama nor understands liberalism.  Voters get it, albeit over time.  This is consistent with voters who are engaged in their real lives more than in the play-by-play of the Beltway, and is inconsistent with voters being altogether clueless.

This insight suggests that Republicans should stick to substance in their upcoming campaigns, not get off-message due to fears over shallow class rhetoric or the predictable Obama blame game.  It suggests the public will grasp a meaningful, consistent message, just as it has grasped the president's message.  Republicans should unapologetically tell their growth-focused, job-creating, family-loving stories again and again and again.  These stories will register.

Conclusion.  This exercise presents an encouraging picture: The public is patient, cannot be easily misled, and holds a president accountable for results, regardless of spin.  This is all a well-meaning public servant can ask: to be judged on his merits after being given a chance.

This is also a rare moment for bipartisan agreement.  These results suggest that both left and right can unite in harmony to encourage Barack Obama to go on the offensive, stick to his guns, double down on ideology, and blame everyone else.

By all means, the president should loudly argue that the stimulus was effective in saving or creating jobs, that ObamaCare will improve healthcare and cut costs, that the S&P downgrade was a self-inflicted wound due to government disagreement, and that our poor economy is attributable to the Arab Spring and the Japanese tsunami.

Please keep talking, Mr. President.  Do it for the country.