Is our current "Young Pretender" preparing to fly the coop even before his Culloden in 2012?

Until the advent of Barack Obama, Charles Edward Stuart (1720-1788), called The Young Pretender, was a prime contender for the title of greatest narcissistic waster of other people's time and trouble in history.  The Stuarts' hopeless quest to reclaim the throne of England brought little beyond misery to the Scots, many of whom subsequently turned their backs on the Highlands to wrest a better life out of the American wilderness.

The restoration of the Stuarts was, by the middle of the eighteenth century, a romantic dream, not 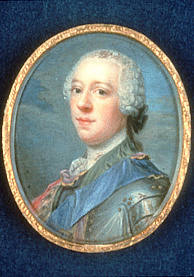 unlike our own Hope and Change.  Certainly, like Hope and Change, it served the needs of some powerful interests to foster the Stuart cause, but in the end the Jacobite dream dashed itself headlong into reality and fell to pieces, leaving the poorest of its adherents, who "trusted" in their Prince from Across the Water, to pay a terrible price.  Charlie, who had grown up in Rome as a pampered aristocrat, with about as much connection to those he sent to ruin and misery as our own vacationer-in-chief, whined and complained his way through The Forty-Five, as the Jacobite Rebellion was called, but at least stuck it out until the final disaster at Culloden before fleeing.  One begins to wonder whether Barack Obama will be so resolute.

In Chicago, where they  know him best, there are doubts that he will:

Increasingly, people here in Chicago believe Barack Obama will screw over the Democrat Party in the 2012 election and unceremoniously decide he won't seek re-election if he accepts the fact he will not win the race... Obama reminds me of the husband of one of my friends who just skipped out in the middle of the night, out of the blue, when he realized he hated being married, wasn't man enough to handle fatherhood, and wasn't capable of doing the hundred unpleasant and difficult things every day required to head a family. He left a wife and three kids behind, with little income and no idea how to keep things together, and headed off for warmer climates and better chances for adventure. This is exactly what Obama is going to do to the Democrat Party - and America - next year, when he declines re-election and instead focuses on building his Frank Gehry-designed "Obama Presidential Library and Museum to His Own Self-Proclaimed Greatness" on the tiki-tacky shores of Hawaii[.]

Recently, Peggy Noonan suggested the same possibility about a "wilting" Obama, asking, "Is his visit to Martha's Vineyard a sign that he's giving up?"  Obama loyalists like Charles Blow of The New York Times are showing about the same level of doubt and disappointment in our young prince as the Jacobite generals:

... But one person I never thought would fall into this valley was Barack Obama, the charismatic candidate who electrified the electorate in 2008 and whom many saw as the fulfillment of the dream of the even-more-electrifying Rev. Dr. Martin Luther King Jr. Yet here Obama is, down in the valley, struggling to connect with the American people and failing, increasingly coming across as dispassionate to some and outright revolting to other...Of course, Republicans haven't helped. They're absolutely committed to, and obsessed with, his failure. But that cannot be the excuse. Great leadership isn't shaped in the absence of opposition but in the presence of it.  Great leaders draw us together by our universal humanity; they galvanize the wills of the willing; they draw clarity from the spigot of chaos. ... The country needs the president to rise to this crisis in word, spirit and deed. We need him to reach out of his nature and into the nation's need[.]

Barry, like Charlie, thought it was going to be easy -- just show the standard and the simple folk would flock to it; smile and they would swoon.  Now there are daunting challenges everywhere, and nothing in his pampered and undemanding life prepared him to meet them, nor even really understand those he must direct in doing so.  And the challenges, or as Bonnie Prince Barry called it, the "run of bad luck," are likely to continue into 2012.

In addition to our domestic miseries, we could see foreign "bad luck."  Pakistan's stability is tenuous and an Islamist revolt is not out of the question there.  Some fear that China may provoke a confrontation at sea; neither Afghanistan nor Iraq are trending well.  "Change" in Egypt and Libya is likely to produce a mess for the US.  Of course Iran and North Korea can't be left off any list of possible troublemakers.  No, neither 2012 nor beyond will make the golf and parties any better to voters.

One single event could precipitate Barry boarding that bonnie boat for Skye next year, and that is the Supreme Court striking down ObamaCare.  While it may be true that "[a]ll anybody cares about right now are jobs and economic growth and they don't want to be reminded about health care," Obama simply lacks the sand to weather that rebuff.  After all, he did drag us along on this costly trip and all we got was that stinkin' ObamaCare tee shirt.

In the meantime, what's a feckless down-on-his-luck Pretender to do?  Some of his friends are already beginning to construct a legacy/legend.  Like the keepers of Bonny Prince Charlie's flame, they are already beginning to paint Obama in the soft tones of romantic tragedy and unfulfilled, but noble, promise.  A few of his more hard-headed allies are proposing one last charge of spending that will not so much save Obama as continue to nourish the special interests who brought him to power.  So it will be feed the bureaucracies to leave a personnel legacy, something Democrats always do better than Republicans; continue to paper the country with regulations that will serve the interests of government and private takers; and begin constructing the romantic legend of the failed Prince who was too good for his people.  Maybe the last-minute flight will energize a dispirited Democrat base and discombobulate an opposition prepared to run against a concrete failure, not an airy new promise of Hope and Change.

"Will ye no come back again?"  Please don't, but when that boat sails off to Skye, or Maui, let's just hope the Republicans have picked a candidate prepared for a potential game-changer.