Warning: mysqli_free_result() expects parameter 1 to be mysqli_result, bool given in /var/www/html/americanthinker/admin/common/functions/func.general.php on line 126
 'Balanced Compromises' Are Neither - American Thinker
|

'Balanced Compromises' Are Neither

Did you know that if we leave tax rates alone, meaning leave the Bush rates in place, the federal government would collect more revenue than it has historically?  You know who says that?  The Congressional Budget Office.

The CBO can be a double-edged sword.  Liberals like Ezra Klein could, for example, quote the following from the CBO's analysis of President Obama's most recently proposed budget.

"Of the various initiatives that the President is proposing, tax provisions would have by far the largest budgetary impact... Those policies would reduce tax revenues and boost outlays for refundable tax credits by a total of more than $3.0 trillion over the next decade relative to the amount projected in CBO's baseline."

In short, get rid of the Bush rates and, whoosh, $3 trillion worth of deficits wiped out, the entire difference, and then some, between CBO's "baseline" and Obama's proposal.  More than the dreaded cuts in the latest debt deal.

(Conservatives beware.  The reason Obama's 2012-21 deficits are so high under CBO's scoring is entirely due to Obama keeping Bush's tax rates.)

Simply letting the Bush tax rates expire looks very appealing, doesn't it?  But let's look at the other side of CBO's sword.  Take a close look at this CBO chart. 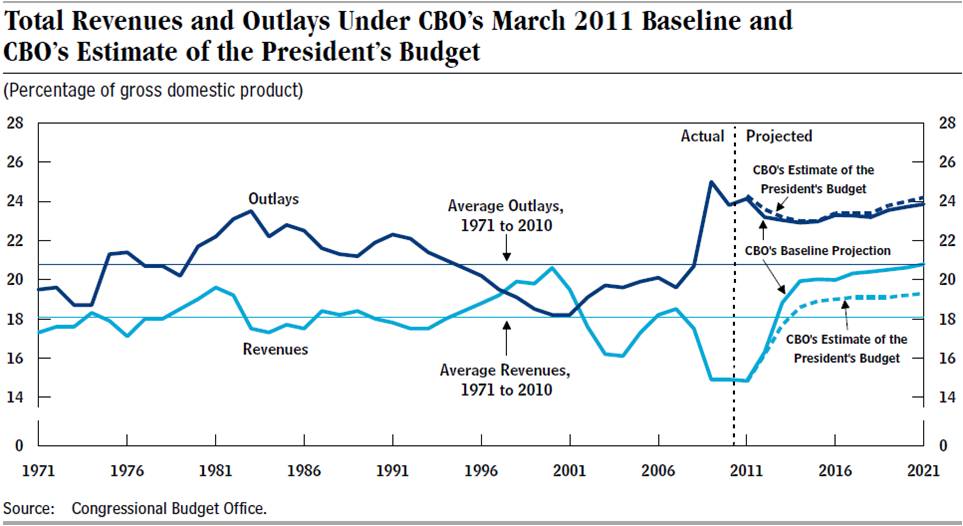 Now if you were Simpson or Bowles, you would hold your hand over all the years prior to 2015 and look only at the right side of this chart, especially 2015.  You would see that revenues are about 19% of GDP (assuming current tax rates are extended) and spending about 23% then, causing deficits of about 4% of GDP.

And if you were Simpson or Bowles, you would play Solomon and split the difference.  You would pronounce that the correct answer is to make both revenue and spending equal 21% of GDP.  The geniuses were able to take an average of 19 and 23 and then descend from Mount Commission to pronounce their findings.

Problem solved.  A balanced approach.  A compromise.  Live happily ever after.  (If you can just get the Tea Party to shut up.)

But we are not Simpson or Bowles.  We look at the whole chart and notice those two little thin, horizontal lines. Those lines represent historical averages. Over the years CBO chose, 1971-2010, revenues averaged 18.0% of GDP and spending averaged 20.8%.  (Choosing a different multi-decade time period would make little difference in those averages.)

But lo, even with all Bush and Obama tax rates and credits extended permanently, the CBO expects revenues to exceed 19% of GDP -- above historical averages!  If spending were kept at historical levels, our deficits would be reduced from 2.8% of GDP to about 1.8%.  The bond-raters would give us AAA and call for drinks around the house.

The problem is spending.  Look at the chart again.  Spending took a sudden, and permanent, step up as soon as Obama was sworn in.  Spending went from below average to more than 3% of GDP above average, permanently.

The "stimulus" was not a simple one-time spike in spending.  It ushered in a whole new normal: a level of spending not ever seen in peacetime America.

The hidden trick in all liberal analyses of the budget is to assume that a stimulus-level of spending is required from here out.  What they don't tell you is that that is about half a trillion of today's dollars above the historical level, every year from now on.

The whole point of such budget analyses by liberals is to cement in place what Obama and two years of a filibuster-proof Democrat Congress have wrought: a federal budget about half a trillion dollars fatter than it used to be.

Simpson-Bowles said 19% of GDP is not enough revenue.  They want it to be 21%.  Look at the chart yet again.  Revenues have never been that high.  You can look at data going back to the country's founding and never have revenues been 21% of GDP.  Over no 10-year period have they averaged even 19% of GDP.

On the spending side, 21% of GDP is more than President George W. Bush ever spent.  While Bush is blamed for spending too much, the great compromisers now say that is too little, even if you assume all "Bush" wars away.  Simpson-Bowles calls for more spending than Bush, more spending than Clinton since the House went Republican, and more than the post-WWII average or even the post-Vietnam average.

The so-called "balanced" approaches are not balanced at all. The Simpson-Bowles "compromise" is to set both taxes and spending at unprecedentedly high levels.  We can't even be sure we can raise revenue to 21% of GDP.  We never have before, not with a top rate of 35%, 39.6%, 70% or even 91%. Never.

A truly "balanced" approach would be to simply return to historical levels of spending.  You know who is proposing such a balanced approach? Republicans.  Every plan put out by Rep. Paul Ryan, including the proposed FY 2012 budget passed by the House of Representatives in April, proposes spending levels near historical averages.  It's what Cut, Cap and Balance did.  The Republican way is the balanced way.

You know who would love to return to the spending of the Clinton years?  Tea Party Republicans.  Spending was 18.2% of GDP in both 2000 and 2001 -- the lowest level since 1966.  Please, Democrats, imitate Bill Clinton -- in a good way.  Don't tax like Clinton; spend like Clinton.

If we simply leave taxes alone, and spend like Clinton did, we'd have surpluses by 2014 and forever more.  The CBO says.

Randall Hoven can be followed on Twitter.  His bio and previous writings can be found at randallhoven.com.