Warning: mysqli_free_result() expects parameter 1 to be mysqli_result, bool given in /var/www/html/americanthinker/admin/common/functions/func.general.php on line 126
 Are the Black Flash Mob Attacks on Whites Obama's Fault? - American Thinker
|

Are the Black Flash Mob Attacks on Whites Obama's Fault?

Mary Kay Ash, founder of Mary Kay Cosmetics, said, "The speed of the leader is the speed of the gang."  In other words, leadership flows from the top down.

Folks, I believe human beings are responsible for their behavior.  However, as America's first black president, fair or unfair, Obama's presidency comes with enormous responsibility in terms of its influence on black youths.  This is why it is so unfortunate that American black youths' ultimate role model is a characterless, race-baiting political hack.

While I am not saying president Obama is responsible for the epidemic of black youth flash-mob attacks on whites around our country, his race-baiting has to be a contributing factor.

Obama and his minions have despicably created racial tension for political gain -- accusing all who opposed his hostile takeover of our health care system of racism.

Clearly, the Obama administration's game plan for his presidency is to use race as a bludgeon 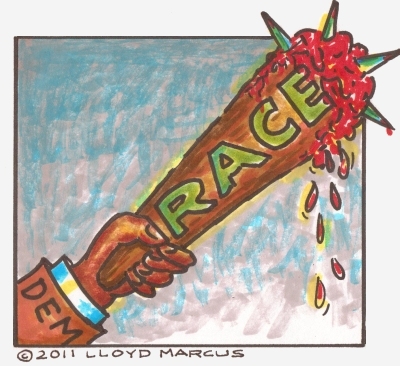 whenever anyone opposes an Obama agenda item.  Obama obviously considers the loss of harmony between black and white Americans to be acceptable collateral damage.

Here are a few examples of race exploitation by Obama and company which could be fueling rage in black youths.

Let's begin with ObamaCare.  Several Democrats suggested that race was a factor in opposition to ObamaCare.  Former President Jimmy Carter led the charge saying, "[A]n overwhelming portion of those who demonstrate against Obama are doing so because the president is a black man."  In essence, President Carter was telling black youths, "Many Americans are racist and against you."  Do you think Carter's statement may have inspired black anger?

Then, there was the black professor Gates vs. the Cambridge Police incident.  Before knowing the facts, President Obama declared the white decorated arresting officer guilty of racial profiling, saying the police "acted stupidly."  Obama continued, "[W]hat I think we know separate and apart from this incident is that there's a long history in this country of African-Americans and Latinos being stopped by law enforcement disproportionately.  That's just a fact."

Good Lord, the black president of the United States parroted the mantra of black gangsta rappers: "if you are black, the white po-po [police] are out to get you."  I find it extraordinary that Obama did not anticipate the catastrophic negative impact his proclamation would have on the relationship between black urban youths and white law enforcement.

Would a man who values racial harmony say such a divisive thing, even if he suspected it to be true?  Obama is the president of the United States, for crying out load. His words carry tremendous power and influence, particularly among black youths.

Obama's indictment of the nation's police was to cover his butt for assuming the Cambridge police was guilty of racism before knowing the facts of the incident -- thus confirming that Obama cares about only himself.

The Tea Party is a constant extremely annoying thorn in the side of Obama in implementing his fundamental transformation of America.  This is why Obama has launched a campaign to bludgeon the Tea Party to death with false accusations of racism.

Obama said, "[R]ace is still a problem."  He stated race to be a key component in the rising opposition to his presidency from conservatives, "especially right-wing activists in the anti-incumbent Tea Party movement."  Obama added, "[A] subterranean agenda in the anti-Obama movement -- a racially biased one -- that was unfortunate."

Black conservative Kenneth Gladney was beaten and sent to the emergency room by SEIU thugs shortly after Obama sent a clarion call to his supporters to "[h]it back twice as hard."

It is not a stretch to suggest that highly impressionable black youths might retaliate against a white America perceived to be dissing their African-American idol.

Lloyd Marcus, Proud Unhyphenated American, is co-chairman of The Campaign to Defeat Barack Obama.  Please help him spread his message by joining his Liberty Network.  Lloyd is singer/songwriter of the American Tea Party Anthem and author of Confessions of a Black Conservative, foreword by Michelle Malkin.  LloydMarcus.com