The Global Warming Hoax: How Soon We Forget

Nobody has ever offered a more succinct indictment of the global warming hoax than H. L. Mencken, who said: "The whole aim of practical politics is to keep the populace alarmed (and hence clamorous to be led to safety) by menacing it with an endless series of hobgoblins, all of them imaginary."

While Americans are rightfully focused on the unemployment situation and the debt limit negotiations, we've pretty much forgotten about global warming as an issue ever since Obama failed to pass his Cap & Trade bill.  As a result, we're becoming complacent once again about the huge threat we face from the progressives' attempts to control the world's energy industry based on the greatest scientific hoax in human history.  In reality, however, nothing's changed, as Obama is still imposing his will on us through the EPA's regulation of CO2.

This hoax still threatens our economy, while advancing the UN's "Agenda 21" in more ways than one.  It's also the foundation of Obama's "green jobs" approach to the unemployment issue, since the very concept of "green jobs" is just as bogus as the idea of a "carbon footprint."

With Fox anchors and conservative bloggers arguing that those "green" jobs are simply far too few to fuel a strong recovery, the fact that they're based on junk science, and aren't economically viable on their own, gets little if any mention.

The truth is that CO2 is a beneficial trace gas that exists in such small quantities in our atmosphere, that the idea of it playing any significant role in determining our climate is simply silly.  CO2 comprises less than half of 0.1% of our atmosphere, and only 4% of it comes from human activity.  That's 16ppm, or 1 part in every 62,500 parts of our atmosphere.  CO2 is plant food, and a key component in all life on earth.  Plants need CO2 to grow and produce oxygen.  They feed animals (including ourselves).  Animals in turn consume oxygen and plant-based foods, and exhale CO2.  Without CO2, nothing could be green!  This brief video showing the effect on plants of increasing atmospheric CO2 is quite striking.

Ironically, the audacity of their lies about CO2 are overshadowed by the most obvious part of the Hoax.  The fact is that warming is good!  Throughout history, man, as well as all other living creatures, has thrived during the earth's warm periods, and suffered and starved during the cold ones, a lesson that we're about to be reminded of in the coming years. 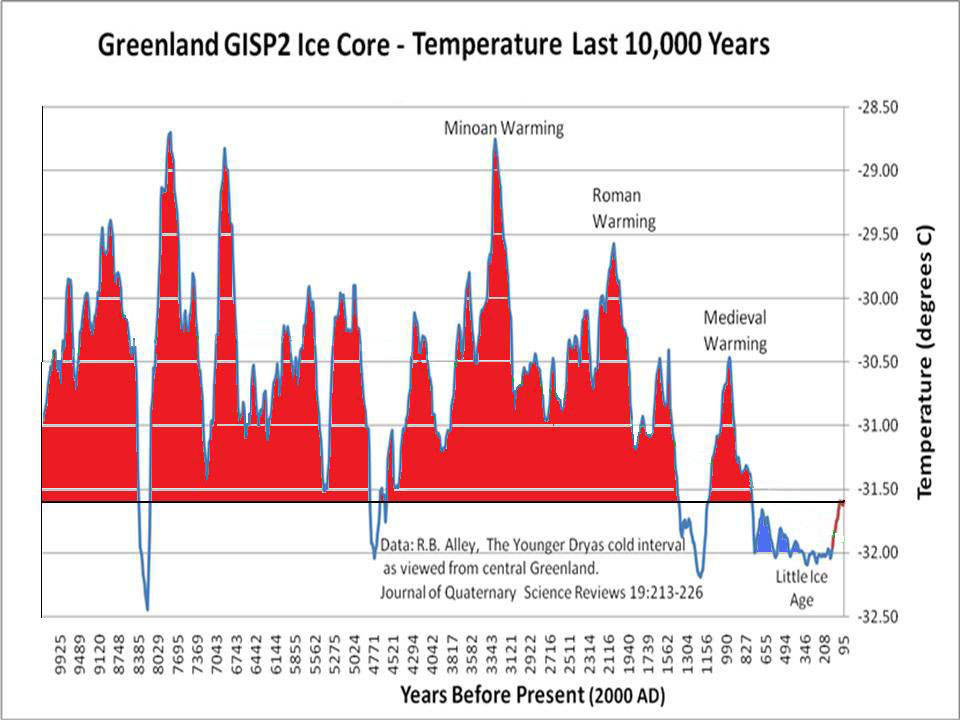 The Roman civilization arose when the earth was much warmer than it's been recently.  And it's no coincidence that just as the earth was entering the 400-year-long "Little Ice Age," the Roman Empire was overrun by the Huns.  The Egyptians also built the pyramids when it was much warmer than today, and the beginning of the industrial revolution coincided with the end of the Little Ice Age.  If global warming is such a problem, doesn't it seem odd that mankind has always flourished during the earth's warmest periods?

And if increases in atmospheric CO2 are the primary cause of warming, why, from the 1940's through the mid 1970's, was the earth cooling when increases in our use of fossil fuels were at their greatest? 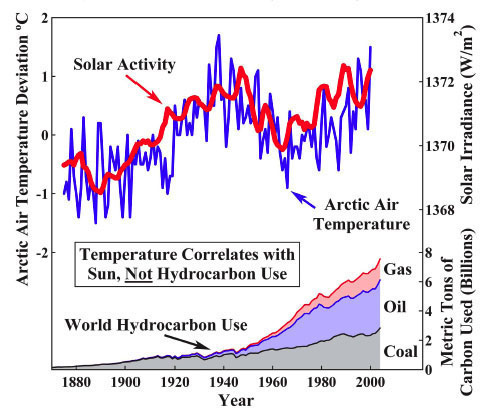 And why is it that Mars and Jupiter, and Neptune's moon Titan, have all followed the exact same warming and cooling cycles as the earth during the 20th century?  Does anyone think that our SUVs and power plants are causing the same climate change on other planets and moons in our solar system, or is it more likely that the changes there were caused by the fact that we're all in the same solar system?  I.e., "It's the sun, stupid!"

To me, the most worrisome aspect of this problem is that we simply aren't debating this issue properly.

In 1974, in an article in Time Magazine entitled "Another Ice Age?," the same alarmists suggested that the (then-)coming ice age was being caused in part by the same vehicular emissions that they're now blaming for global warming.

Man, too, may be somewhat responsible for the cooling trend. The University of Wisconsin's Reid A. Bryson and other climatologists suggest that dust and other particles released into the atmosphere as a result of farming and fuel burning may be blocking more and more sunlight from reaching and heating the surface of the earth.

But then it stopped cooling and started warming again.  This has been happening throughout history (see Global Warming: Exposing the Far Left's Lies).

Now, since the warming stopped 12 years ago, the alarmists are finally beginning to admit that the earth has started cooling again.  And what are they telling us is the reason why?  In what's got to be one of the most mind-boggling displays of chutzpah ever seen, they're actually saying that the reason that it hasn't been warming for the last 12 years is that China and India are now burning such a massive amount of coal, that it blocks the sun's rays from reaching the earth and warming it.  That's right!  Our use of fossil fuels is warming the earth, while China's is cooling it?

How stupid and gullible do they think we are?  Australia just announced that they're going ahead with a carbon tax on their power companies, rather than a Cap & Trade system.  But no matter what they call it, they're still fleecing the same victims, the people, who'll be paying this new tax in the form of higher utility bills, and higher prices on everything they buy.  And while this insanity unfolds, we're still paying lip service to this absurd lie by continuing to make reference to the virtues of reducing our "carbon footprint."  Every time we hear that preposterous phrase, we should laugh at it, and then explain why we find it so funny if anyone asks.  Years of constant repetition is what sold the lie in the first place.  It may take years of constant repetition of the truth to counter it.

Our primary argument against Cap & Trade and the EPA's CO2 regulations has been that they would be bad for the economy.  Of course they would be, but by attacking them on those grounds, we're granting our sanction to the underlying premise -- that CO2 is dangerous.  But it's not.  And there never were any benefits to be had from Cap & Trade, regardless of its cost.

There are millions of smart people out there who have been bombarded with this global warming nonsense for so long that they've actually come to believe it.  The old adage that if you tell a lie often enough it becomes the truth happens to be true, especially when the people don't get to hear other points of view, something our mainstream media has made sure of over the last few decades.

But even though people are slowly growing skeptical about it, and turning away from the mainstream media, we can't afford to let our guard down about this scam.  And we'll never truly defeat it for good by arguing against it based on the enormous costs involved.  Whether it's global warming, or global cooling, or ocean acidification, we need to denounce this madness as the outrageous lie that it is, if we're ever going to defeat this hydra in all of its various guises.