Warning: mysqli_free_result() expects parameter 1 to be mysqli_result, bool given in /var/www/html/americanthinker/admin/common/functions/func.general.php on line 126
 The Debt Ceiling Charade - American Thinker
|

The circus surrounding the debt ceiling makes interesting theater but all the babble is irrelevant.  How the debt ceiling is eventually resolved only changes the timing and extent of the economic collapse.  In that sense, it has no bearing on the ultimate fate of the nation.

But what a spectacle!  Politicians fight for political points while blaming the opposition for unreasonableness, cruelty, and wanting the world to end.  Journalists keep score as to which side is winning as if they were covering a major sporting event.  Economists propose solutions to problems they still don't understand.

The irreverent H.L. Mencken must be chuckling in his grave over this theatre.  Politicians are making P.T. Barnum proud with a performance only equaled by Nero and his fiddle.

The debt ceiling will almost certainly be raised although Gallup suggests only 22% of the public supports such action.  This action might prevent some short-term discomfort but only at the expense of longer-term tragedy.  Both time frames are explored below.

August 2 is the date that Treasury Secretary Geithner estimates the government runs out of money.  That apparently is when the federal government exhausts its ability to "steal" from governmental retirement and other sundry accounts.  July 22 has been mentioned as the "drop dead" decision point in order to prepare for a government spending scale-back.

August federal government revenues are anticipated to be $172.4 billion; spending, $306.7 billion.  This shortfall of $134 billion is no surprise.  The monthly shortfall annualized represents a yearly deficit of $1.6 trillion, in line with the deficits of the last two years.

If The Debt Ceiling Is Not Raised

If the debt ceiling is not raised the government will have to cover the shortfall in two ways:

Additional revenues cannot be obtained for the month of August.  Nor is it likely revenues could be raised for subsequent near-term months.  Thus a decision to not raise the debt ceiling leaves government only the option of cutting spending.

Which payments will be honored if spending must equal revenues?  This chart from Zerohedge details August government spending and offers one possibility: 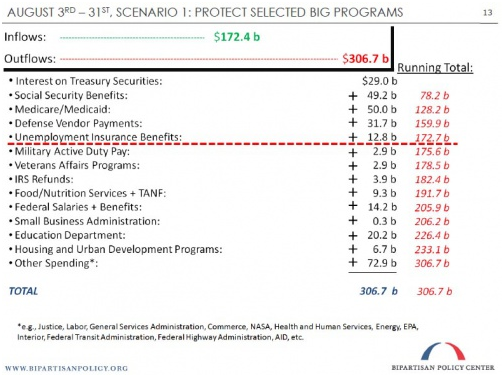 Contrary to much of the wailing, government need not default on its debt obligations unless it chooses to do so.  They can easily be met within the expected revenue stream.  The claim that we will default on debt payments is a political red herring.

The items below the dotted line could not be paid in the scenario shown above.  Other scenarios might differ in terms of priorities, but the fact is that there is a $134-billion shortfall in August and similar shortfalls in subsequent months.  All one can do is move items around, an exercise akin to furniture rearrangement on the Titanic.

The quandary shown above is what will likely lead to an increased debt ceiling.  That does not solve the country's problem, yet it solves the politicians' problem.  It appears to make the problem go away, but only cutting spending will solve the real problem.  That hard decision recognizes that resources are limited.  It kills the image of government as Santa Claus, something politicians are unwilling to do.

If The Debt Ceiling Is Raised

Raising the debt ceiling may provide a third option.  However, the key word is "may."  Just because it becomes permissible under US law to borrow more does not mean that markets will cooperate.

There are disturbing signs the US is close to being unable to borrow in credit markets.  Our profligacy has been criticized by major buyers of Treasuries like China and Russia.  Both maintain they are cutting back their holdings.  Allies like Japan and Britain are defending against their own financial apocalypses leaving little money available for anything else.

The profligacy of the US government cannot continue.  It cannot continue to spend 42 cents more than every $1.00 it collects.  We are potentially  close to the point When Lenders Stop Lending, perhaps one event away from a financial catastrophe that will reduce us to Greece.

Markets may have already made a judgment.  QE2 ended June 30.  For the prior six months the Fed purchased about 75% of US deficit financing.  Absent the Fed's involvement, would these bonds have been purchased in traditional credit markets?  If so, what interest rates would have to be offered?

A debt ceiling increase does not guarantee a short-term solution to US deficit financing.  If others decide they will no longer continue to support our Blanche Du Bois lifestyle, a rise in the debt ceiling is meaningless.

Two factors are likely to prejudice the rest of the world against additional Treasury purchases:

Congress' behavior has not been confidence-inspiring.  Their behavior is more like that of the Keystone Kops rather than responsible borrowers.  Even their "aggressive" proposal, expecting to cut spending by $2-4 trillion, is weak.

It is backloaded over a ten-year period and could be changed by any future Congress.  It would not even cover the costs of interest rates returning to normal levels.  Lawrence B. Lindsey, former economic advisor to President Bush, estimates a return to "normal" interest rates of the past two decades would result in a ten-year cost to government of $4.9 trillion.  He used a gradual "ramp-up" in  interest rates to estimate costs:

Markets may not cooperate with Mr. Lindsey's scenario.  It is not difficult to imagine the US in an accelerating debt death spiral where debt must be added just to service existing debt.  In an upset condition, fear and panic would cause interest rates to spike suddenly.  Greek debt, for example, now yields 25-30%, ten times what we currently pay.  A mere 5% overall rise from current levels would increase annual government interest cost by $700 billion.  That widens future deficits by a like amount.

Adding to the risk of financing the increasing and continuing deficits is rollover risk.  Since the days of Robert Rubin's term as Treasury Secretary the government has used primarily short-term funding.  While this strategy minimizes the interest expense, it requires frequent refinancing of debt that matures magnifying the risk of being unable to meet obligations.

From Zerohedge is this table of Treasury securities that mature in August: 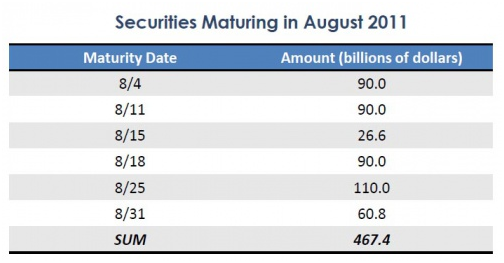 The US government must fund both its deficits plus the maturing debt.  In August that amounts to $600 billion.  Can this be done month after month?  Not indefinitely!  Annualized, the US government must sell new and rollover debt of about $7 trillion this year.  Next year the amount will be larger.

QE3 is almost certainly coming.  It is not because it will help the economy.  Additional QE is coming because the US government is unable to finance additional deficits at reasonable interest rates.  Is that a condition of bankruptcy?  Technically no, but it is usually the final event before sovereign bankruptcy.

The US condition is very close to the condition of Greece.  They are unable to raise funds in credit markets so request that the European Central Bank "print" money for them.  The US government has the Federal Reserve purchase debt when markets refuse to buy.  That is money-printing and virtually identical to what Greece is asking for.

Late breaking: As I finish this article Ben Bernanke has admitted that QE3 is likely coming in testimony before the House.  Markets have responded dramatically, especially gold.

Assuming the short-term obligations can be navigated with additional debt, the longer-term outlook becomes even gloomier.  Buying time, even if possible via a debt ceiling increase, does nothing to solve the real problem.  It only adds to it.

In a spiraling debt crisis, time is the enemy.  The problem worsens as time passes.  This is especially so with regard to the spiraling costs associated with US unfunded liabilities.  These represent the hole in the boat that cannot be plugged.

The total obligations of the US government include the funded debt (about $14.5 trillion) plus the unfunded liabilities associated with Social Security, Medicare, and Medicaid.  The trustees of these programs estimate the present value of these obligations to be over $100 trillion.  These estimates have traditionally trailed reality.  Recent deterioration in the funds flowing into these programs and the increase in healthcare costs as a result of ObamaCare is likely to require significant upward revisions in the estimates.

The magnitude of numbers in the billions or trillions is incomprehensible to most.  To reduce these numbers to measures that can be understood, the following assumptions are used:

By converting government obligations to individual and household portions, the numbers become understandable (and unconscionable):

These numbers represent pro rata shares of government debt.  Any personal debt like mortgages, car loans, credit cards, etc. would be on top of these numbers.

The government has promised to pay about $120 trillion.  The total net worth of the country is estimated at half of this amount.  Thus, the government could confiscate every car, home, savings account, etc. and still not be solvent in terms of what it has borrowed or promised.  That would leave all people and corporations with nothing, including the likelihood of not receiving future healthcare or Social Security as they are now structured.

Solving the debt ceiling problem in ways floated before the American public is nothing but a political fix.  It is not a solution to the underlying insolvency/bankruptcy problem facing the US government.  A series of similar political fixes is why we are in this position.

The US government has been insolvent for years.  Now bankruptcy is a risk because it is potentially "borrowed out."

QE3 is not a solution.  It is currency destruction that leads to eventual hyperinflation which wipes out fixed incomes and most savings.  It is nothing more than a temporary political escape from reality.  It ensures the ultimate political and economic collapse of the country.

Government has no one to blame but itself for this problem.  No one but government is capable of solving it.  Unfortunately, government knows how to create problems but not solve them.

The only solution is to pare back government to where it is no longer destructive to the productive sector.  It must be defanged and caged.

Immediate cuts of 50% in spending would be my starting point.  Additional cuts would follow.