What if, over the next decade, the federal government spends as irresponsibly as President George W. Bush did?

Compare two things: the 2012-2021 federal budget as proposed by President Obama in February (and as scored by the Congressional Budget Office in April), and the actual average spending level from 2001 through 2008 as a fraction of Gross Domestic Product. We'll keep the CBO's predictions of revenues and GDP untouched so that only spending differences are compared.

The CBO scored Obama's proposed budget as costing $46.2 trillion over 2012-2021, or 23.5% of GDP on average. Since the CBO expects $36.7 trillion in revenues over that time frame, the 10-year cumulative deficit would be $9.5 trillion. That is the Obama plan, and the only one he has put in writing this year.

That is a $7.7 trillion difference! Here is a table, to make the comparisons easy.

*Approximated by subtracting the 10-year cumulative deficit from total debt in 2021.

Got all that? To answer the original question: if, over the next decade, the federal government spends as "irresponsibly" as President George W. Bush did, it would:

Deficits below 1% of GDP and debt below 55% of GDP, both declining, would not even make the bond market's radar screen, much less lead to watch lists and downgrades. Our national debt nightmare would be over.

Here are a few tidbits from fiscal history. First, spending under President Clinton (1993-2000) averaged 19.8% of GDP. So spending 19%-20% of GDP is not some fluke of history unique to George Bush. That was the average for the 16 years before Obama took office, 1993 through 2008, under Presidents of both parties, in times of both peace and war.

Second, the House of Representatives is the source of federal budget legislation. Republicans led the House corresponding to budgets written for Fiscal Years 1996 through 2007. Democrats led it for FY 2008-2011 budgets. Here is a plot of federal spending over those fiscal years. 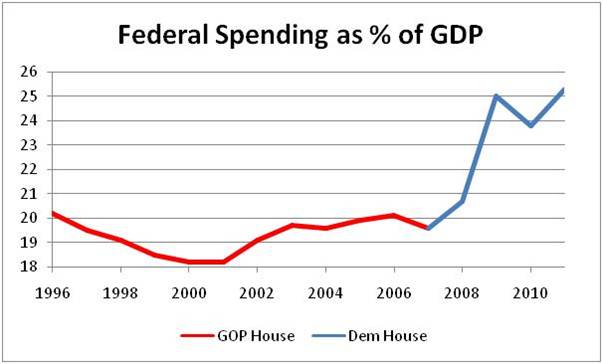 Third, federal spending never exceeded 23.5% of GDP from 1947 through 2008. Obama will have exceeded that level in each of the four years of his term. OMB estimates federal spending to be over 25% of GDP right now. Obama is simply blowing through all levels of spending that preceded him, six decades worth, without anything resembling a return to historical levels.

Fourth, the decade discussed here, 2012-2021, will start almost three years after the Great Recession ended. Obama's above spending plan takes place after his stimulus will have been spent. Both the CBO and OMB expect that decade to be one of economic growth. As Obama is wont to remind us, we are in recovery, the private sector is adding jobs, yadda, yadda. So Obama's 2012-2021 spending plan has nothing to do with getting us out of some temporary jam caused by recession. He is growing government, pure and simple. It's what he does.

Recall these 2009 quotes from President Obama:

"It's a little hard for me to take criticism from folks about this recovery package after they've presided over a doubling of the national debt. I'm not sure they have a lot of credibility when it comes to fiscal responsibility.

"What I won't do is return to the failed theories of the last eight years that got us into this fix in the first place, because those theories have been tested and they have failed."

Obama is a funny guy. He amuses me. Like a clown.

Randall Hoven can be contacted at randall.hoven@gmail.com or via his web site, randallhoven.com.