In America's rural Midwest, an annual ritual is underway in the vast cornfields that stretch to the horizon.  Thousands of American teenagers, in a rite of passage, are doing the kinds of farm work more commonly performed by visitors from South of the Border. 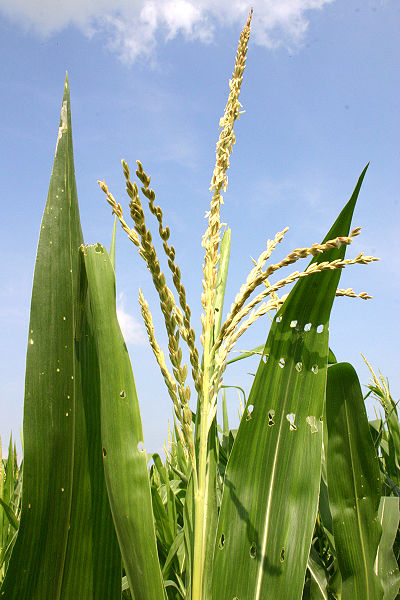 The teens are detasseling seed corn.

Going from one stalk to another under the blazing sun, they yank off the uppermost tassels in various rows.  Some detasselers walk their rows.  Others ride in baskets extending from tractors.

It's exhausting work -- dirty and sweaty.  But poor and uneducated migrant laborers are nowhere to be found in most fields.  Rather, it's fresh-faced rural teens, usually 13 to 15.  They do this work to earn extra money over their summer vacations.  What's more, in the rural Midwest detasseling is regarded as a character-building experience.

Scrapes, sunburns, and twisted ankles are the worst things that usually befall the young detasselers, boys and girls employed by subcontractors for giant seed companies.  It's unheard of to have serious accidents.  But last Monday, a freak accident in Illinois claimed the lives of two 14-year-old detasselers, Jade Garza and Hannah Kendall, both of Sterling, Illinois.  They were electrocuted near an above-ground irrigation system.  Two fellow female detasselers, both sisters, also were injured in the water-soaked field by an electrical current.

Jade Garza and and Hannah Kendall were best friends, and their tragic deaths are getting prominent news coverage in newspapers in the Midwest.  A Facebook page set up for the girls quickly received 11,000-plus tributes to the teens.

The accident also has called attention to the epic effort each summer to detassel seed corn that, due to culture and custom in the Midwest, is reserved exclusively for young teens.

In some parts of the country, many middle- and upper-middle-class teens spend their summers doing fancy internships.  But not in the rural Midwest.  There, large numbers of teens eagerly work as detasselers, a job they proudly list in their resumes, and that many of their parents also did as teens.

Not long after dawn, the young detasselers cheerfully ride in buses that take them from staging areas to outlying cornfields.

By 6 or 7 a.m., they're in the thick of dew-covered stalks.  To stay dry, they wear ponchos or cut-out plastic garbage bags over their heads, removing them as the sun burns off the dew and the fields heat up. 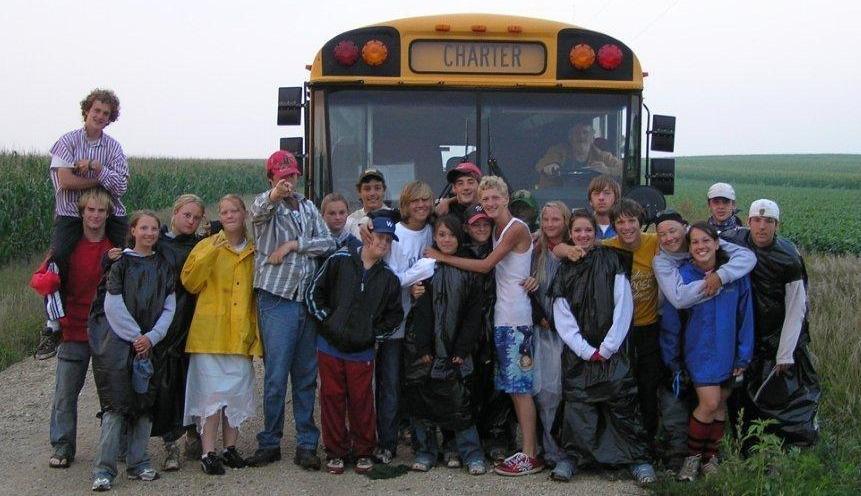 It's a ritual that's now in high gear.  By detasseling some rows of corn, other rows planted with different seeds will cross-pollinate the detasseled stalks, producing hybrid seeds commanding high prices.

The detasseling season lasts a few short weeks -- but the pride and work ethic it instills in rural youngsters benefits them for a lifetime, say current and former detasselers.

To be sure, rural youngsters detasseling corn are nothing like the migrant laborers one might associate with grueling agricultural work.  On the contrary, they are middle-class kids.  And they are overwhelmingly white, a fact reflecting rural America's demographics.

Detasseling is the first job many rural teens have, and they're proud of that fact.  The CEO and executive vice president of Country Financial, Barb Baurer, proudly lists her very first job in high school: corn detasseling.

"Fancy internships don't reflect the work ethic that you learn in a cornfield," wrote Mary Gustafson in an article fondly recalling her days of detasseling as a young teen.  When not working in the cornfields, she worked in her family's True Value hardware store.  Her father pushed her into corn detasseling for her own good, brushing aside her desire to spend the summer writing a novel.

Detasselers earn up to $1,300 or more for a few weeks of work -- a small fortune for young teens in junior high or high school.  Most couldn't earn that much money at other jobs available to teens who are less than 17.  Fast-food restaurants, after all, don't generally hire kids who are 13, 14, and 15.  Rural teens who work as detasselers are thus getting their first taste of financial independence and pride in hard work.  In many cases, the young teens are supervised by college students who themselves started working as detasselers as young teens.

For the thousands of teens now working the fields in America's corn belt, the deaths of two of their own has darkened a detasseling season that is normally filled with camaraderie and good times, as is reflected in the amusing YouTube clips some make to celebrate a special time of their lives.  In one, detasselers dance in the corn fields to pop music; another features a busload of detasselers enjoying an impromptu drum solo from a fellow detasseler.

Writing on the Facebook page dedicated to the two teenage detasselers and best friends who died in an Illinois cornfield, Sheri Reimers-Smith wrote: "My thoughts and prayers go out to all family and friends due to this accident. An accident that will never be forgotten and a community that has pulled together to comfort one another. R.I.P. sweet angels. You are both in wonderful hands! Praying for strength to help deal with such a tragedy."

For the teenage detasselers now in the fields, this season will be bittersweet.

Below is a 3 minute YouTube video on detasseling, of a certain charm.