Warning: mysqli_free_result() expects parameter 1 to be mysqli_result, bool given in /var/www/html/americanthinker/admin/common/functions/func.general.php on line 126
 Barack and Joe: Taxation - American Thinker
|

I keep thinking about Joe the Plumber.  I went back and read the full transcript of his dialogue with then-candidate Obama, in October of 2008, right when all the awful things had begun to happen to the economy.  It is really an amazing exchange of views -- most amazing because no other interviewer or media question-shouter ever got as much out of Obama about his economic vision as Joe did.  When Tom Brokaw later complained on Charlie Rose that "We don't really know anything about Obama," he could at least have listened to what Obama told Joe.

Well, the reason why I ask you about the American Dream -- I mean, I work hard.  I'm a plumber; I work 10-12 hours a day [Obama: Absolutely.] and I'm, you know, buying this company and I'm gonna continue to work that way.  Now, if I buy another truck and adding something else to it and, you know, build the company, you know, I'm getting taxed more and more while fulfilling the American Dream.

And here is then-candidate Obama explaining to Joe, first, his view of the unfairness of the current tax system:

Which I understand.  But another way of looking at it is, 95 percent of folks who are making less than $250,000, they may be working hard, too, but they're being taxed at a higher rate than they would be under mine. ... But what's happened is that we end up...we've cut taxes a lot for folks like me who make a lot more than $250,000.  We haven't given a break to folks who make less and, as a consequence, the average wage and income for just ordinary folks, the vast majority of Americans, has actually gone down over the last eight years.

...and then Obama explains his Keynesian vision:

And I do believe that for folks like me who are, you know, have worked hard but, frankly, also been lucky, I don't mind paying just a little bit more than the waitress who I just met over there, who's...things are slow and she can barely make the rent.  Because my attitude is that if the economy's good for folks from the bottom up, it's gonna be good for everybody.  If you've got a plumbing business, you're gonna be better off if you've got a whole bunch of customers who can afford to hire you.  And right now, everybody's so pinched that business is bad for everybody.  And I think when you spread the wealth around, it's good for everybody.

It's all in there -- our president's vision of the tax system, social justice, and the economy.  I want to unpack these, one at a time, to try to blow away the smoke and get at some bedrock of truth.  Beginning with taxation.

This idea is so routinely considered "unquestionably true," and it is in fact so far from the truth that it boggles the mind.  Just look at this graph, provided by the Tax Foundation. 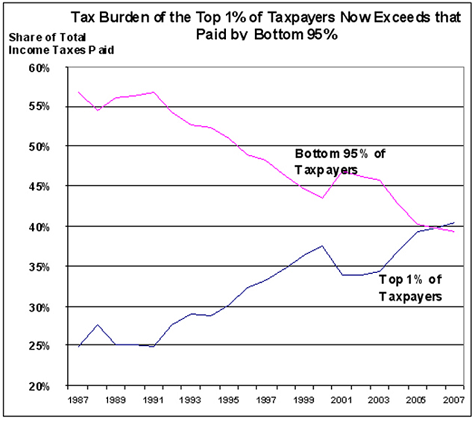 Since 1987 there has been a (relatively) steady trend: the "rich" pay more and everyone else -- "the folks who make less" -- pay less.  Those other folks have, over the last 20 years, gotten a huge break.  Their share of the tax burden has gone from around 57% to 39%!

These numbers take us more or less to 2007.  But, in 2009, as a result of the stimulus, fully $240 billion in "tax cuts" were provided, almost entirely to "folks" on the pink line -- the "bottom" 95%.  In recent talks with Boehner over the "grand deficit solution," according to Politico, the sticking point was that Obama wanted to make the Tax Code more progressive: "The Ohio Republican said he wanted to simplify the tax code and have just three rates for taxpayers as part of a tax-reform package, which would have been implemented by early 2012. Boehner said Obama wanted more 'progressivity' in the tax rates than the speaker would accept -- meaning higher taxes on upper incomes and more layers of tax rates."

This is what it means to transform a country.  On the one hand, to make fewer and fewer pay more and more, and on the other, to use the tax system and the state generally to pay money to political clients -- people other than Joe.

During my recent testimony before the Senate Budget Committee [in March 2011] I cited an OECD statistic that the U.S. has the most progressive income tax system among industrialized nations. ... [T]he ratio of income taxes paid to the share of income earned by the top decile ... for U.S. households is 1.35, far greater than the ratio of taxes to income in any other country. Even in the three countries with a comparable distribution of income, the ratio of taxes to income was less, 1.18 in Italy, 0.84 in Poland, and 1.20 in the U.K.

The point, even controlling for income distribution, is that the US tax system punishes Obama's "folks like me who make a lot more than $250,000" more than any other industrialized nation.

If there's a problem with this system (and surely there is), it is that the "middle" folks, the other 95%, are wildly undertaxed.