Warning: mysqli_free_result() expects parameter 1 to be mysqli_result, bool given in /var/www/html/americanthinker/admin/common/functions/func.general.php on line 126
 An Astounding Turnabout by Obama - American Thinker
|

An Astounding Turnabout by Obama

Something remarkable occurred in President Obama's press conference on Friday (July 15).  It was so astonishing that I was not sure I had heard right, and had to wait until the press conference transcript was posted on the White House website to be sure.  But there it is in the sixth paragraph.  Here is the quote in full:

Now, what that would require would be some shared sacrifice and a balanced approach that says we're going to make significant cuts in domestic spending.  And I have already said I am willing to take down domestic spending to the lowest percentage of our overall economy since Dwight Eisenhower.  [Emphasis added.]

I, at least, have never heard this before, but "before" is not really important; President Obama has said it now.  Republican negotiators, the Tea Party, indeed the country must hold him to it.  This is the entire game, the entire problem, in spending and therefore the debt ceiling question.

Spending has exploded to 25+% of GDP on president Obama's watch, six percentage points above where it "should" be at 19% of GDP!  If the president is willing to take spending back to 19% of GDP, which is the level implied by the Eisenhower reference, the game is won.

This is a statement that Speaker Boehner should grab on to and hold on to for dear life.  Every discussion from now on should begin by holding the president to this declaration.  With this statement as the predicate for discussions, we can get a satisfactory agreement on the debt ceiling. 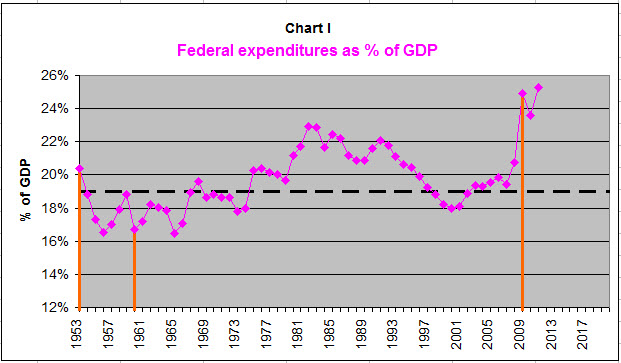 Estimated expenditures for the Obama administration in 2011 as a percentage of GDP are 25.3%.  Not only is this representative of the breakout in spending of the Obama administration as can be seen on the chart, it is in part driven by increases in Social Security and Medicare, which are only starting to reflect the retirement of the baby boom generation.

One reason why Friday's statement is so astonishing and so important is because heretofore, President Obama has shown no understanding of the extent to which the budget is out of control.  Indeed, his own budget submitted in February projected spending at 24% of GDP as far out as 2018.  That is, no real cut in spending as a percent of GDP.  Chart II shows the Obama administration budget estimates as per its February budget: 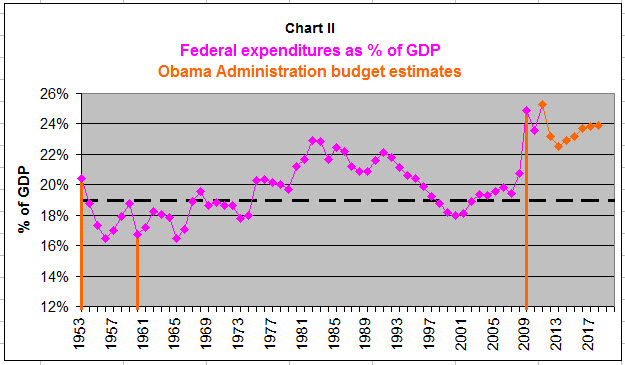 Presumably, with the president's statement on Friday, these estimates are now inoperative, but you can see how far away they are from Eisenhower numbers.

Essentially, the difference between current expenditures of 25+% of GDP, and the numbers of around 19% necessary for the finances of the country to be sustainable over the long term is $1 trillion per year.  One trillion dollars per year is the amount that must be cut from current budgets.  Since GDP grows most years, there is a "dividend" each year for federal expenditures.  If we assume that GDP grows in current dollars (which means real growth + inflation) at about 5%, then this "dividend" is about $150 billion per year.  Therefore, if we were to hold expenditures by the federal government flat for about six years, we would close the gap between spending 25+% of GDP and spending 19% of GDP, which is still above Eisenhower levels.

We don't know how President Obama plans to get back to Eisenhower spending levels as a percent of GDP.  But what is important is his willingness to do so.  Should Obama be the one that restructures federal spending onto a sustainable path of around 19% of GDP, his would become a historic presidency.  We conservatives must seize the moment his declaration of Friday represents.