Warning: mysqli_free_result() expects parameter 1 to be mysqli_result, bool given in /var/www/html/americanthinker/admin/common/functions/func.general.php on line 126
 A Right to Kill - American Thinker
|

A Right to Kill

The society that embraces the death of innocents as a solution to its problems will itself inevitably die.  It may carry on for many decades after its fatal embrace of the Grim Reaper.  But with the moral heart cut out of its body, it becomes a zombie civilization with only the appearance of life.

For death, once embraced, as Goya illustrated so well in his shockingly gruesome painting "Saturn Devouring One of his Sons," has a way of devouring even one's children, as its appetite is never satiated.

"More," Death demands. "That was delicious.  I want more. 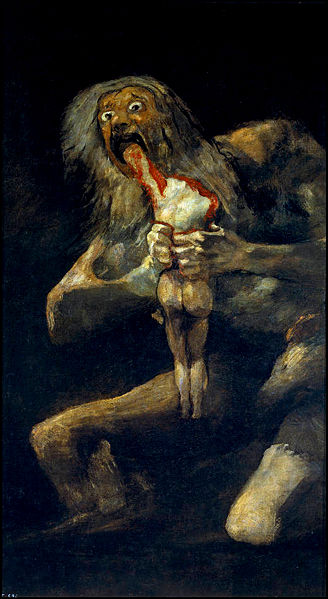 Be that as it may, the sheer perverted joy of insatiable killing is a societal disorder not restricted to renegade individual serial killers.  It's well known all human history is full of pathological societies which fully embraced death as a good thing, as a means of placating the gods, whoever they might be.  For example, the blood-soaked, slippery-slidey steps of the Aztec pyramids and the racks of human skulls of the victims of sacrifice to the Sun god bore testimony to such pathology.

But blood sacrifice is not a thing of the past.  The gods of death are just as richly fed today by innocent human blood as ever, but the justificatory framework for allowing the bloodshed has radically changed.  The old gods needing placation by means of the death of innocents have largely vanished, but they have been replaced by a philosophical and abstract imperative -- a demand for an unassailable human "right" to kill.

Time was, some made-up infraction or some offering to the gods was deemed necessary in order to get prove the "guilt" and get rid of a person.  No matter how trivial the accusation, "guilt" had to be established.  For example, one of Goya's etchings depicts a priest about to be garroted merely for possessing a knife.

Even in ghoulish modern times, establishment of "guilt," even when guilt is established by a mere pretext, has usually been necessary for execution to occur, as was evidenced by the Stalinist show trials of the 1930's and by Mao Tze Tung's Red Guard excesses of the 70's. Enemies of the state must be killed or a vengeful god placated by human sacrifice.

Allowing the death of the voiceless and innocent as a "choice" and as an expression of personal "freedom" is a concept that is relatively new. The perverted and absolute "right" to kill unborn humans who by no stretch of the imagination have ever committed a crime was bound to warp the entire societal fabric.  It also would produce revolting horrors those espousing and establishing the abstract "right" to kill did not foresee.

But once in a while, the veil of secrecy is rent and an entire populace is given a glimpse of the true horrors of the lucrative abortion industry, much as the horrors of slavery were revealed by photos such as this one of "Gordon," taken in 1863 and published in Harper's Weekly.

In less than a period of ten months, the US public has been afforded at least three such glimpses of the horrible realities of the abortion industry.

Case #1: On Good Friday of this year, a dog sniffing around a El Paso,Texas parking lot of Hilltop Family Planning Clinic, found the remains of a dismembered baby of about 12-15 weeks gestation.  The tiny limbs were about the length of a dime.  There is no report as to whether the dog ate some of the baby's remains, but not all the body parts were there.  The person who discovered the grisly bits put them in a garbage bag.  While the police were notified, no police action was taken because Texas law doesn't consider a fetus less than twenty weeks gestation to be human.  There is no legal protection for him or her.

Case #2: Kermit Gosnell operated an abortion clinic in Philadelphia, killing at least two women and uncounted numbers of viable infants.  Among the horrors: infanticide.  According to the Grand Jury report, one incident involved a worker who played with a premature infant while it wiggled around on a counter for 20 minutes before the baby's neck was slit with a pair of scissors in order to sever his spinal cord, a process Gosnell described as "snipping."  Grand Jury investigation photos of the horrors within the clinic included severed babies' feet in jars and trash bags of fetal remains stored in refrigerators.  The grand jury had a few words for the regulatory agencies which were supposed to oversee the clinic:

"The grand jury also had a stern rebuke for regulatory organizations that looked the other way, giving their stamp of approval on his criminal practices. These people who saw the abuses yet stood idly by, or worse, encouraged the behavior that has now shocked the nation bear some responsibility for what happened in Philadelphia. In fact, they deserve criminal prosecution just as much as Gosnell and his cohorts because their silence not only enabled the crimes, but gave tacit consent to them."

Case #3: On August 12, 2010 in Elkton, MD, an 18 year old girl who had been 21 weeks pregnant was rushed to the hospital.  Her uterus, bowel and vagina had been pierced by one Dr. Nicola Riley, who flew in from Utah every other week to do late term abortions.  Not only did Riley lacerate the girl's organs, but the abortion was incomplete.  The baby's head was detached and pushed through the uterine wall into the abdominal cavity.

The semi-conscious teen was dropped off at the hospital via rental car by Riley and fellow abortionist Steven Chase Brigham. Riley then left the bleeding patient to go perform another abortion.  The girl herself was flown to John Hopkins hospital where doctors attempted to repair the damage done by the abortionists.

When police raided Brigham's Elkton "clinic," they found 32 late term fetuses-one of which was 35-36 weeks gestation--tossed in a freezer.

A great lesson is to be gained from the revolting examples given above; namely that there is a strict adherence to a pro-abortion ideology which demands the absolute "moral" principles of abortion on demand must be adhered to, no matter what.  Rush Limbaugh has been much vilified for describing abortion as a sacrament of the deeply religious cult of the Left, but he is not far from the mark.  The fact of the matter is that no horrors, no matter how often they are uncovered and documented, appear to be too great for the pro-abortion crowd to give up their core belief that a woman is entitled to abort her baby at any stage of pregnancy.

The radical feminist coat hanger wavers of the 1960's probably did not expect to see the day girl babies would be aborted at an astonishing rate merely for the crime of being female. Nonetheless, few radical feminists have spoken out strongly against the practice.  They are committed to abortion on demand.

Nor did the advocates of granting abortions to minors anticipate the cases in which fathers; uncles and grandfathers would escort little girls they had seduced and impregnated to abortion clinics in order to get rid of condemning incestuous evidence.  Abortion on demand must remain law of the land.

And scarcely ever has the pro-abortion crowd given credence to grief stricken fathers-to-be whose girlfriends and wives abort their children against their wishes.  One such dad-to-be, consumed by grief and rage, put up a billboard announcing his anger, thus severely straining the concept of free speech, according to pro- abortionists.  He and millions of other fathers are not a consideration to the abortion crowd.

All the above is to say nothing of the embryonic stem cell research of Pepsi designed to improve the flavor and "health" of its drinks, thus causing customers to literally have death run through their very veins.  Nothing to see there, either.  Move along.

In sum, absolutely nothing will deter those committed to abortion on demand to moderate or the question their absolutism, even if it were to transpire that lampshades were being made out of fetal skin.

Because of the distorted absolute imperative of abortion on demand, in spite of the fact the United States of America's Declaration of Independence guarantees "Life, liberty and the pursuit of happiness," our country has long since eclipsed the killing rate of any country with the possible exception of China.  Some 50,000,000 unborn babies have expired since the literally fatal Supreme Court decision "Roe vs. Wade" of 1973.

All of the killing has been justified by the aforementioned absolute, inalienable "moral right" of a woman's right to choose whether or not she wishes to carry her unborn child to term. No matter how gruesome the actualities of the mega-buck abortion industry are, no compromise by "pro-choice" advocates is accepted.  Abortion on demand throughout pregnancy, a woman's inalienable and moral  "right"  is adhered to steadfastly, though the means of killing the pre-born may vary according to efficiency and assurance of result; namely, a dead baby.

But unrestrained mass killing is always the result when human beings create an absolute right to destroy other members of the human race, be it Jews or the unborn.

The Left loves to posture as the truly compassionate segment of humanity, constantly tarring the Right as hopeless ideologues whose rigid morality sacrifices the common good.

But as history shows and current events prove, leftists turn out to be the ones hopelessly and willfully bemired in absolutist thinking that results in absolute carnage.

The Left has committed itself to feeding insatiable Death, who devours all in his path, belches up the bones and says,

"That was yummy, but I want more.

Fay Voshell holds an M.Div. from Princeton Theological Seminary, where she received the seminary's Charles Hodge Award for excellence in systematic theology. She may be reached at fvoshell@yahoo.com