Warning: mysqli_free_result() expects parameter 1 to be mysqli_result, bool given in /var/www/html/americanthinker/admin/common/functions/func.general.php on line 126
 A National Security Apparatus in Decline - American Thinker
|

A National Security Apparatus in Decline

The deck chairs on the ship of state are being rearranged once more.  Robert Gates is out to pasture after a career at CIA followed by a shorter tenure at DOD.  Leon Panetta, former California congressman and incumbent spymaster, is replacing Gates at the Pentagon.  And General David Patraeus is retreating from Kabul for a sinecure as Panetta's successor at CIA.  None are likely to rock the boat in their new positions.  Unlike Robert McNamara and Donald Rumsfeld, the top tier of the Obama administration are the grey men of national security -- unremarkable and unimaginative.

Gates orchestrated four wars and won none.  He may also be the first SecDef to turn the Joint Chiefs, with the assistance of Admiral Mike Mullen, into an E-Ring version of the Village People and make Private Bradley Manning a pin-up for the defunct admonition to become an "Army of One."  Gates leaves us wondering how a jihadist like Major Nidal Malik Hasan got promoted to field grade and how a flake like Manning ever got a top-secret security clearance.  All four Services wrote reports on the Fort Hood massacre; not one mentioned Islamists.

Leon Panetta wasn't much better at CIA.  Panetta inherited the quality of analysis problem from the malleable George Tenet.  Recall the National Intelligence Estimates (NIEs) on Iraq and Iran.  Burned on the Pakistan, North Korean, and Iraq nuclear programs, the Intelligence Community is still hedging bets about the Shia bomb.  The CIA and community analysts are like bodybuilders on steroids: pumped with deficit spending, but still unable to get it up for the tough calls.

A decade after the horrors of 9/11, more than a dozen Intelligence agencies still can't produce a clear picture of the enemy.  Descriptions of Islamist depredations are buried under vague adjectives and nouns like "terrorist, radical, insurgent, and extremist."  Americans and Europeans die at the hand of Muslims in a score of countries, yet we are still "not at war with Islam" or Islamists.

Panetta and President Obama have been taking victory laps after Osama Bin Laden's assassination, but self-congratulation ought to be conditioned by two considerations: history and ground truth.  Franklin Roosevelt and Henry Stimson defeated German fascism and Japanese imperialism on five continents in half the time it took CIA and the DOD to find and kill Bin Laden.  And Bin Laden's death may become a kind of palliative for apologists, yet another excuse to ignore the larger threat of viral, global Islamism.

David Patraeus is the most ironic member of team Obama.  When Patraeus worked for George Bush he was vilified as a liar and derisively labeled "betrayus" by the American left.  As CENTCOM commander, he redeemed himself among progressives by endorsing a study, widely circulated in Washington, which claimed that a settlement of the Israeli/Palestinian impasse was the key to the global Islamist problem.  Thus did Patraeus dip his brogans into the murky waters of anti-Semitic politics and endear himself to Vice President Joe Biden and national security advisor John Brennan.

The subsequent Patraeus tour in Afghanistan was a bust on several counts.  As the author of the US Army's counterinsurgency (COIN) manual, and the Afghanistan "surge," he had the opportunity to prove a concept: secure the landscape and build a nation.  He did neither.

Unfortunately, the Patraeus doctrine confuses warriors with social workers.  In another day, generals like Sherman or Patton believed that the key to military success was to "hold them [the enemy] by the nose and kick them in the ass."  Under Patraeus, ass-kicking morphed into hand-holding.  Before Patraeus left Kabul, semi-literate Taliban psychopaths were promoted to negotiating "partners."

To be fair, Patraeus is just one high-profile example of the political correctness in today's military.  Israeli reductionism is the most obvious symptom.  Neither the Intelligence Community nor the larger national security establishment has the courage or horse sense to acknowledge the global Islamist menace without using the "Israeli problem" as a touchstone.

Making Israel the leitmotif of global Islamic irredentism ignores historical and contemporary evidence and confuses a regional issue with a global phenomenon.  Repeating anti-Semitic slurs also provides fuel and motive for the next holocaust.  Flag officers like David Patraeus and Mike Mullen should know better.

Pashtun tribesmen of South Asia couldn't spell Jerusalem or find Israel on a map.  No Muslim fanatics in India, Pakistan, Afghanistan, Thailand, Indonesia, or the Philippines have ever been delayed at an Israeli checkpoint.  And unlike their co-religionists in the 22 nations of the Arab League, Israeli Muslims are blessed with daily bread, democracy, potable water, and flush toilets.  Few Israeli Arabs would trade an Israeli passport for a laissez-passer anywhere in the Ummah.  Blaming Israel for global Muslim rage is like blaming Nazi atrocities on European shtetls. 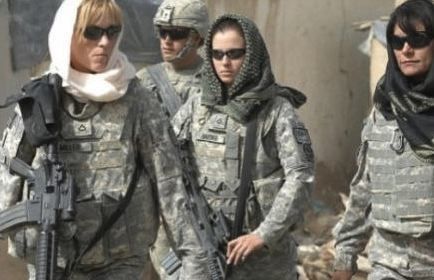 The most offensive nation building mandate under Patraeus may be the combat hijab, the Muslim woman's headscarf.  American servicewomen are now "encouraged" to wear Islamic headgear when on patrol.  Never mind the heat or humiliation of submission; when did going native replace helmets, safety, and common sense?  And why would you want to light up infidel women in a society where misogyny is a cultural norm?

The addition of David Patraeus to an Arabist lobby, chaired by John Brennan, is an ominous development.  Brennan, burdened with Stockholm Syndrome, may be the most dangerous advisor in Washington.  Almost anything he writes shows Brennan to be an Arab, if not Muslim, sycophant.  And if Barack Obama's speeches matter, he and Brennan are on the same page.  Add an analytically challenged CIA, run by Patraeus, to the mix and anti-Israeli bias could reach a critical mass or tipping point in the next two -- or six years.

The paradox of a pro-Islamic American administration killing Muslims on four (Iraq, Pakistan, Afghanistan, and now Libya) porous fronts becomes more bizarre over time.  Maybe Muslims are dying for some good; the same cannot be said for Europeans and Americans.  Good strategy is the art of pairing resources with interests.  Save hash or heroin, there are no American interests in Afghanistan.  Any Muslim community, including Detroit, is now a potential haven for terrorists.

Team Obama defines Afghanistan as a "war of necessity."  If it is the only necessary conflict, what are the other three fronts?  Target practice?  In 700 years, Islam has not resolved internecine religious and tribal fissures.  What hubris allows American and European politicians or generals to think they can save Muslims from themselves?

At some point Islamism will implode or be destroyed.  Such is the fate of all monocultural or totalitarian movements.  Yet, the cuttlefish of NATO are unlikely to defeat an enemy they are unwilling to name.  War is better left to statesmen and generals with clear vision and strong stomachs.  Maybe Russians, Indians, or Chinese will be up for the job.  And as Bernard Lewis reminds us, emerging states are not likely to have as many scruples about Muslim body bags or martyrs.  Insha'allah!