Warning: mysqli_free_result() expects parameter 1 to be mysqli_result, bool given in /var/www/html/americanthinker/admin/common/functions/func.general.php on line 126
 A Commander in Chief in Need of Serious Self-Reflection - American Thinker
|

A Commander in Chief in Need of Serious Self-Reflection

By Lauri B. Regan

I spent a portion of my Fourth of July holiday in a local shopping mall.  It was not my first choice for a day meant for barbeques and fireworks, but as a working mother, national holidays typically serve as errand days for me.  Apparently, however, some of our country's future heroes and leaders did in fact choose to spend their Independence Day shopping at the mall -- members of the Corps of Cadets of the United States Military Academy at West Point.

By my guestimation, there were several hundred young men and women walking around the mall neatly dressed in their khaki pants and collared shirts, and I was proud to be shopping in such good company.  But I also felt a lump in my throat every time I walked by an individual wearing a West Point logo.  I could not help but wonder what the future would hold, if that young person would survive his or her service to the country.

I had a similar feeling a couple of weeks ago when I was in Israel.  In that country, joining the military is not an option; it is an obligation and one that almost every Israeli proudly fulfills in the name of survival.  In America, our citizens take for granted that their freedoms and way of life will be defended by the young people who choose to enlist in the military; the vast majority of citizens do not opt for duty in reliance upon others.  Israelis do not take survival and freedom for granted -- they have either already served or one day will serve, they have friends and family who are currently serving, and they have a lump in their throat and a pit in their stomach every day knowing that their loved ones may not survive the next war, rocket attack, or soldier's kidnapping.  And Israelis most certainly do not rely on others to help them survive.

Early in his presidency, in the midst of very un-presidential and personal attacks on Israel and its leadership, President Obama told American Jewish leaders that Israel must "engage in serious self-reflection."  Sadly, Obama was quite serious when he made that ridiculously ignorant comment.  And as another Independence Day passes just weeks after Obama dissed the Israeli Prime Minister for the umpteenth time and made self-aggrandizing speeches pitting Israel against the rest of the world drawing it further into a position of isolation, it would be nice to know what it would take for this American president to engage in serious self-reflection himself.

Obama makes strategic national security decisions not recommended by his military advisors, throws allies under the bus while reaching out to terrorist organizations, and determines that American leadership should be superseded by the multinational decisions of the United Nations (and its multitude of Islamic member states).  Yet has Obama ever considered that his foreign policy decisions have not only placed American servicemen and women in even greater harm's way than faced under the best of circumstances, but that the entire Western world is at risk due to his failed leadership?  All indications are that the Leader of the Free World, who does not know the difference between a Corpsman and a corpse-man, has no idea that leading from behind is antithetical to "the values of Duty, Honor, [and] Country" instilled at West Point in so many of our country's true leaders.

And while Obama's gaffes appear on a regular basis, one would assume that when he recently claimed that a deceased soldier was "the first person who I was able to award the Medal of Honor to who actually came back and wasn't receiving it posthumously," someone on his staff would have advised the Commander-in-Chief that it is time he begin to truly care about his troops rather than use them for photo ops and campaign stops.

I googled the phrase "can the country survive Obama" and pages of blogs and articles appeared on the subject.  But I imagine that most would agree that even another four years of Obama will not lead to the ultimate demise of the United States -- albeit decades will be required to repair the damage.  I feel less confident, however, when considering how many Americans may one day be killed in a terrorist attack at home or abroad.  And I dread contemplating just how many American servicemen will die fighting for the freedoms that allow Obama to jaunt across the world wining and dining, vacationing and golfing, and complaining about missing "being anonymous" and that the stress of the job is causing too many worry lines in his otherwise seamless face.

I also feel less confident than Jonathan Tobin when it comes to Israel's ability to survive another four years of this Commander-in-Chief.  Tobin wrote an article in this month's Commentary Magazine, entitled "Can Israel Survive This Presidency?"  While I agree with Tobin's premise that strong Congressional support, as well as that of the American people, will help Israel confront the adversities she faces, I do not agree that this support will have a definitive impact on the US/Israel relationship or Israel's survival.  For without some serious self-reflection (and a crash course on the history of the Mideast and its peoples -- or better yet, a four-year degree from West Point) on the part of Obama and his foreign policy advisors, I am once again left with a lump in my throat and a pit in my stomach worrying about what the Mideast will look like in 2016 when he is done playing God and experimenting with ill-informed policies.

Much has been written about Obama's erratic and illogical decisions in the face of an Arab Spring.  And most recently, Obama has chosen to engage in diplomacy with the Islamic fundamentalist (i.e., terrorist) organization, the Muslim Brotherhood, which he also helped bring toward power in Egypt.

However, the most dangerous of Obama's Mideast policies is that with regard to Iran.  Not only did Obama fail to support the Green Revolution when there was an opportunity to overthrow Ahmadinejad and the Mullahs, but he has failed to show any true leadership in preventing Iran from becoming a nuclear hegemon.  And while perhaps not surprising coming from the American president who proudly leads from behind, Obama campaigned on causing the oceans to recede and nuclear weapons disappearing from the earth (or at least reducing "the role of nuclear weapons in our national security strategy").

Alas, while the rest of the world ignores the most dangerous and imminent threat to the region and the world, Israel, which has borne the brunt of Obama's anger and disdain since he entered office, will likely prevent him from going down in history as the American president who allowed Iran to go nuclear.  It is unquestionable that for Israel to survive Iran's existential threat, the military option must remain on the table.  However, the question that remains is just how difficult Obama will make it for Israel to succeed in saving the world from a nuclear Iran (and his reputation in the pages of history).

An analysis of the statements and actions of Obama and his foreign policy advisors clearly indicates that not only will Obama do everything in his power to prevent Israel from attacking Iran, but he will also not assist her before, during or after such an attack -- either militarily or diplomatically.  And that is why now more than ever, Israelis walk around with a constant lump in their throats and pit in their stomachs.

While every family member of a soldier must experience the same sense of dread, Israel now faces military threats never before seen in the history of any one country.  With tens of thousands of Iranian missiles aimed at her from Gaza and Southern Lebanon, Syria and Iran, and perhaps even Egypt, Israel is truly alone to save herself and the world.  And the American president has embarked on little to no self-reflection as to what this means for Israel and the soldiers who will be forced to embark on this mission or America and the Corps of Cadets and other soldiers who risk their lives to defend our nation.

A very telling photo of Netanyahu and Obama side by side in their 20s has been making its way around the internet. 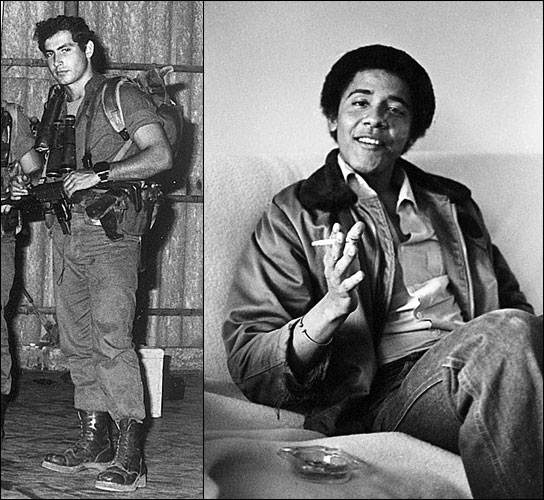 Whom would you want as your Commander-in-Chief?  Who represents the values of Duty, Honor, and Country and who will best defend those values?  While military parents say their prayers and deserve the world's utmost respect and appreciation, what they really need is for Barack Obama to spend the remaining time of what is hopefully his only term in office engaging in some serious self-reflection.