Warning: mysqli_free_result() expects parameter 1 to be mysqli_result, bool given in /var/www/html/americanthinker/admin/common/functions/func.general.php on line 126
 When Will We Ever Learn? - American Thinker
|

When Will We Ever Learn?

In the words of Pete Seeger, "When will we ever learn?"  Washington sells us snake oil.  Oblivious fools that we are, we just keep right on buying.

A recent newspaper Letter to the Editor (6/8/11) accurately quotes the American Journal of Public Health (2009) that 45,000 Americans die each year for lack of health insurance.  The author then blames the health industry.  True, then wrong.  The author also ignores the 10-plus million Americans who choose, yes choose, not to sign off for free government health insurance.  When they become sick, Federal mandates require that providers deliver "free" health care.

People in Canada -- who have insurance -- are dying every day waiting for "approved care service," yet some Americans urge that we adopt their system.  True and foolish.

Washington says 45 million Americans are uninsured and cries that health care costs are unsupportable.  Then they "reform" healthcare by passing the PPAHCA (Patient Protection and Affordable Health Care Act).  True, true, and lie-lie-lie.

When will we wake up?  When will we ever learn?  Having health insurance is not what we want.  We want and need health care.  They are obviously not the same.  Even if PPAHCA does insure all Americans (doubtful in the extreme: remember the "10-plus million"), it actually reduces care services, by cutting reimbursements to providers.  So we will be like the people in Canada or Great Britain: technically having insurance coverage but in the real world, not getting care.

When will we recognize the three big lies about healthcare, embodied in PPAHCA?

Lie #1: PPAHCA, where PP stands for Patient Protection, reduces access to care.  How does that protect patients?  At the same time that they "save money" by cutting payments to providers, they spend money, a measly $1 trillion.  Who gets that?  See Lie #3 below.

Lie #2: The first "A" in PPAHCA stands for "Affordable."  What can you say about someone who claims the Act is "Affordable" and then spends $1 trillion dollars that we do not have?  The kindest words might be deluded or not in touch with reality.  The more appropriate epithet is mendacious politician.  As Mark Twain wrote in 120 years ago, "Suppose you were an idiot.  Suppose you were a member of Congress...but, I repeat myself."

Lie #3 is the flying fickle finger of fault.  U.S. government officials, what we laughingly call our "Representatives," focus their blame on Big Pharma, greedy hospitals, greedier insurance companies, embezzling doctors, fraudulent labs, or overcharging device manufacturers.  The government never points the finger at the group that takes more dollars than any other: they themselves and their bureaucracy.

Take a look at the PPAHCA, if you can wade through over 2300 pages of lawyer-ese.  While it contracts (reduces) health services for patients, it massively expands (increases) an already bloated, expensive, and unnecessary bureaucracy.  Is that what you and I call effective use of limited healthcare dollars?

Check the numbers.  Forty per cent of all -- repeat all -- dollars that go into the U.S. healthcare so-called system Never Come Out.  In 2009 that 40% represented one trillion dollars that did not go to Big Pharma, greedy hospitals, greedier insurance companies, embezzling doctors, fraudulent labs, or overcharging device manufacturers. 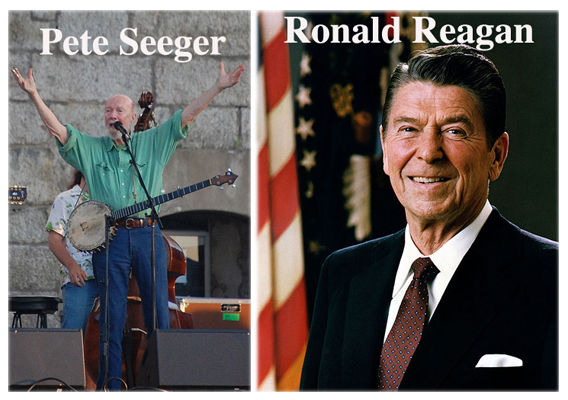 We must listen to Pete Seeger and recall Ronald Reagan.  We need to learn that Government [control of and feeding on healthcare] is not the solution.  It is the problem.