Warning: mysqli_free_result() expects parameter 1 to be mysqli_result, bool given in /var/www/html/americanthinker/admin/common/functions/func.general.php on line 126
 Ten Lessons From Federal Spending - American Thinker
|

One can learn quite a bit just from looking at federal spending over time.  The history of our relationship with our government can almost be summarized in a graph. 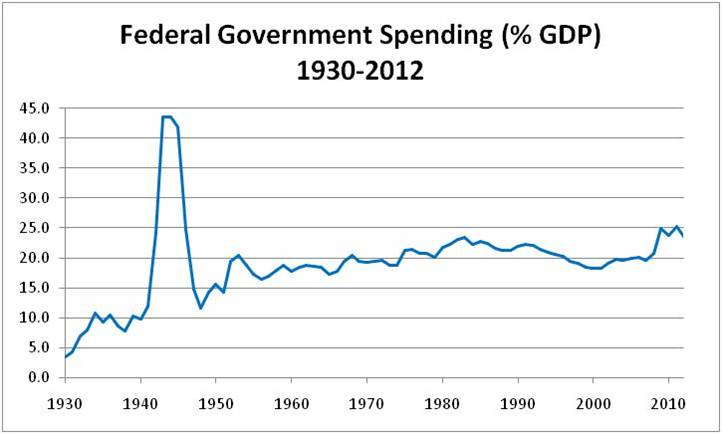 Here is my take on that graph, using the bits of history that go along with it.

Lesson 1. We can survive as a country with a lot less federal spending.

The above chart shows that federal spending was 3.4% of GDP in 1930, and then shot up rather quickly.  What was spending before 1930 (before that OMB table kicks in)?  Dean Kalahar recently provided a summary of pre-1930 spending.

For more than the first 140 years of the country's existence, the federal government got by on about three cents out of every dollar.  Yet somehow it sustained an army and a navy.  We also had police, a judicial system, public education, roads, and railroads.  We even had trolley cars and libraries.  (I know the federal government did not pay for many of those government functions, but that is the point.  Federalism used to mean something.)

And through that same time, the country prospered and grew.  Real GDP grew at an average annual rate of almost 4% from 1790 to 1930, despite a Civil War, a World War, and several lesser wars in that time frame.  Foreigners flocked to our shores.  We became a world power, both economically and militarily.

(The discussion here is only about federal government spending.  According to the IMF, government spending at all levels in the US is about 41% of GDP now, or more than that of the Asian Tigers like Singapore and Korea, more than Australia and New Zealand, and more than Switzerland and Luxembourg.  The US is not a "small government" nation by any means.)

Lesson 2. Herbert Hoover grew the federal government more than FDR did during the Great Depression.

While FDR did solidify the newer, bigger federal government prior to World War II, most of the initial growth occurred under Hoover.  Any notions that Hoover sat on his hands during the worst of the Depression or that he was a "limited government" or free-market conservative are totally false.

Lesson 3. The Great Depression and World War II changed everything.

The 1930-50 era in the US was a revolution just as much as the Russian Revolution or the Chinese Revolution (in terms of results rather than bloodshed).  Federal spending exploded, going from a 3% level to a 20% level of GDP.  That spending came along with a host of new federal powers, agencies, and programs, including Social Security.  Also during that time the Constitution was reinterpreted to eliminate most limitations on the federal government to regulate interstate commerce or spend for the general welfare.

Lesson 4. Ronald Reagan really did cut government spending, and in fact reversed its trend from one of expansion to one of shrinkage.

The chart below shows federal spending since 1960.  See that spending was trending up prior to 1983 and then trended down from 1983 through the end of the century.  What happened in 1983?  Reagan's first round of tax cuts became fully effective. 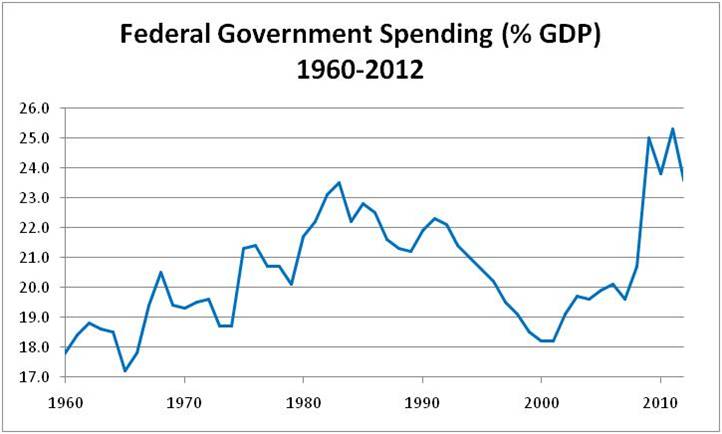 The chart below makes these trends more apparent.  The dashed lines represent the trends (linear regression) over periods starting/ending in 1960, 1983, 2000, and 2012. 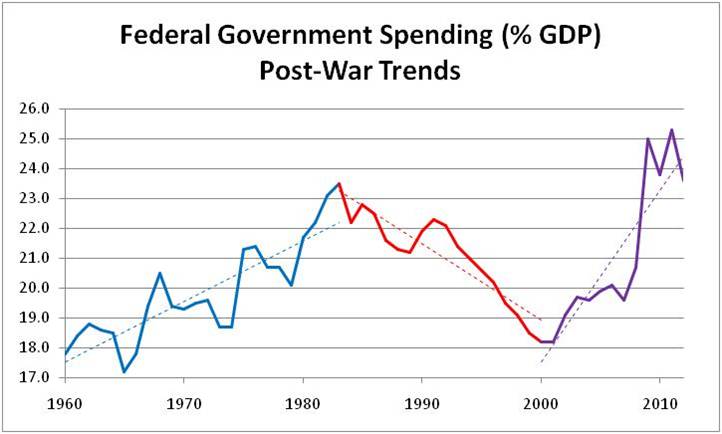 Lesson 5. President Clinton presided over a continuation of the trend of shrinking federal spending that Reagan started.

Regardless of who gets credit (President Clinton, the first Republican Congress in forty years, and/or the peace dividend resulting from Reagan winning the Cold War), the federal government was spending only 18.2% of GDP by 2000.  That was the lowest level since 1966, and a drop of over 5% of GDP (about $800 billion in today's dollars, or more than the entire Social Security program) from 1983.

Lesson 6. "Austerity" is not deadly.

Lesson 7. The level of federal spending under President George W. Bush was below the postwar average, but he did reverse the trend.

Lesson 8. The recent explosion in federal spending occurred under budgets written by a Democrat-led Congress and signed by President Obama.

The chart below shows federal spending since 2000.  Look at that chart and know that a Democrat-led Congress wrote every budget from 2008 onward, the exact years corresponding to the spending explosion.  (Also note that 2012 is an OMB estimate.  Don't become too sanguine over any downward trend due to the 2012 number; it might not be real.  There is no 2012 budget; the Democrat-led Senate refuses to pass one or even propose one.) 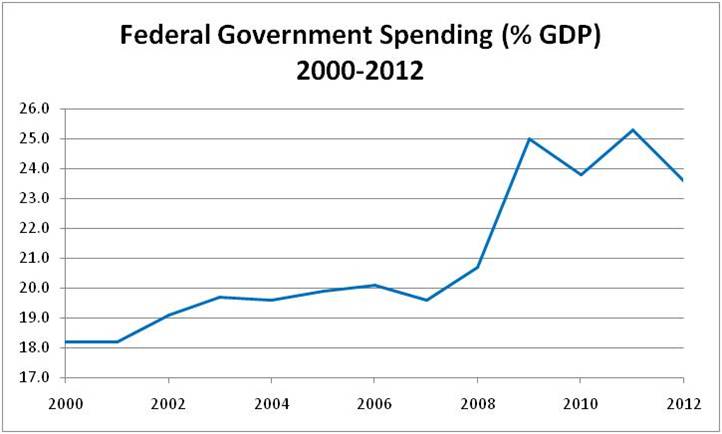 The 2007 federal budget was the last one written by a Republican-controlled Congress.  Spending that year was 19.6% of GDP, or below the post-WWII average, despite wars in both Iraq and Afghanistan.  In fact, it was the year of the "surge" in Iraq.

The Democrats have been on a spending binge ever since: an $814-billion stimulus one month into Obama's term, followed shortly by a $410-B omnibus bill.  Obama asked for the second half of TARP ($350 B) even before taking the oath of office, and then spent much of it on buying car companies.  ObamaCare added several hundred billion dollars of spending over the next decade, even if you believe its proposed half-trillion cut in Medicare will happen.

Obama cannot blame his spending on fighting the recession.  The recession ended in 2009, as he is wont to remind us.  But according to the Congressional Budget Office, federal spending would still be over 24% of GDP in 2020 and beyond under his plan, despite very rosy economic assumptions.

The following question should be asked of every Democrat: Why can't you spend less than Bush did?

Lesson 9. There is nothing "radical" about Republican spending plans.  The CBO scored Paul Ryan's Path to Prosperity.  Federal spending under Ryan's Path would be 20.3% of GDP in 2022.  That is exactly the average over the 1960-2000 period.

Republicans are proposing to simply return to average post-WWII spending levels, rather than the unprecedented levels reached under Obama and the Reid/Pelosi Democrats.  Bush lived with less spending than that.  So did Clinton.  How radical can spending cuts be if the result is to spend more than both Clinton and Bush did?

Democrats, on the other hand, are insisting on levels of federal spending unprecedented in peacetime.  They are the radicals.  Obama is spending 25.3% of GDP in 2011, or two years after the recession ended.  That is more than any year in our country's history, except for 1943-45, the peak of World War II spending.

No Republican is calling for pre-1960 levels of spending, much less pre-1930 levels.  (Wouldn't that be lovely.)  In fact, Ryan's plan saves Medicare, a Great Society program.  Ryan's plan would spend more on "Major Mandatory Health Care Programs" through 2040 than was spent in 2010, as a percentage of GDP.

Current Republican plans are not radical.  They are responsible.  They are actuarially sound ways of preserving the New Deal and Great Society.

Lesson 10. Obama, the Democrats, and most media mislead on a daily basis.

President Obama recently said, "But we can't simply cut our way to prosperity."  Why not?  That's what Presidents Reagan and Clinton did.

Obama also said, "I won't return to the failed theories of the last eight years." If he meant Bush's theory of compassionate conservatism that led to government spending growth, Obama not only returned to that, he doubled down and doubled down again.  Why didn't he imitate Clinton instead of Bush?

Anyone who says we must spend 24% of GDP or more, or else we all die, hopes you will ignore all our history prior to Obama.  Anyone who says if we try to cut spending, it will kill us, hopes you will ignore the 1983-2000 period of our history.  That period of "austerity" happened under Presidents and Congresses of both parties, and resulted in the greatest sustained period of economic growth since the Great Depression.

Anyone who says we live in some kind of laissez-faire free-market economy hopes you ignore the first 140 years of our country's history and the 700% growth in government (as a fraction of the economy) since 1930.

Anyone who says current Republican spending plans are radical and even immoral, or that they eviscerate the safety net, has it exactly backwards.  Republican plans are moderate; they preserve both the New Deal and Great Society programs.

Democrats like to accuse Republicans of wanting to "set back the clock."  They are right; Republicans want to set it back to 2007 or so, when federal spending was under 20% of GDP, deficits were under 2% of GDP, the unemployment rate was under 5%, real GDP grew about 3% per year or better, and one to two million net new jobs were being created every year.

I think I understand what Democrats mean when they talk about "moving forward": more for them; less for you.  But I dare not call it socialism.