Warning: mysqli_free_result() expects parameter 1 to be mysqli_result, bool given in /var/www/html/americanthinker/admin/common/functions/func.general.php on line 126
 Rep. Weiner and the Failure of Anger - American Thinker
|

Rep. Weiner and the Failure of Anger

According to Anthony Weiner's official congressional website, "Protecting Children on the Internet" has been one of the New York congressman's signature interests.  In 2007 for example Weiner collaborated with several others in Congress to pass the "KIDS Act" (Keeping the Internet Devoid of Sexual Predators).  While noting in his summary of the 2007 bill that some offenders reside "less than 500 feet away from unwitting parents, educators, and children" Weiner added:

"Sadly, the Internet is the predator's venue of choice today.  We need to update our strategies and our laws to stop these offenders who are a mere click away from our children." 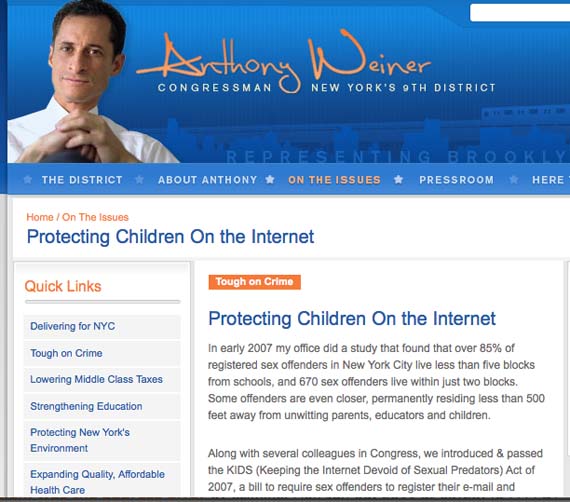 During the Monday press conference at which Weiner admitted to his online sexting escapades he assured reporters that the various women "are all adults, at least to the best of my knowledge, they were all adults and they were engaging in these conversations consensually."

To the best of his knowledge?

In addition, prior to Monday's confessional Congressman Weiner took ABC's Jonathan Karl to task for having the audacity to probe into the precise nature of the congressman's online relationships.  Said the indignant Weiner:

"This is a Twitter hoax, a prank that was done - I'm the victim of it, this poor girl is the victim of it, and to somehow draw a larger line here to people who have done nothing wrong . . . A young woman's life has been turned upside down.  By whom?! By whom?!"

The congressman actually attempted to put the ABC reporter Karl on the defensive:

In other words, for Weiner the "victim," the entire mess everyone else's fault.

While the Congressman apparently thinks that the scandal will not affect his performance as a public servant and lawmaker his constituents should consider what Aristotle observed about hypocrites and liars: "[H]is state of character makes a person . . . a liar."

In other words, lying, like bravery, generosity, and prudence, is acquired by habit, which becomes part of our character, and character determines conduct.  Not only did Congressman Weiner lie, he tried to silence those seeking the truth through intimidation and appeals to pity.   But it's anger, not pity, which should be our proper response to Congressman Weiner.

As a natural law philosopher, Aristotle, unlike many thinkers in the Christian, Hindu and Buddhist traditions, was highly receptive to the value of anger in human affairs.  Anger was nature's defense mechanism, and if used properly it prevented individuals and entire nations from being "slavish."  For Aristotle,

Those who fail in proper anger then "all seem to be foolish.  For such a person seems to be insensible and to feel no pain, and since he is not angered, he does not seem to be the sort to defend himself.  Such willingness to accept insults to oneself and to overlook insults to one's family and friends is slavish."

It has always struck me as odd that the fathers and brothers of unwitting women at the receiving end of these disgusting Weineresque tragedies are rarely heard threatening to smack the predators and perpetrators.

The philosopher Eric Hoffer noted that "the mystery of our time is the inability of decent people to get angry."  Like Aristotle, Hoffer argued that the "phenomenal increase" in violence and crudity in a culture is a product of a majority population that is less "confident of its values" and has "less faith in its destiny" and therefore is less likely to feel anger at those in the minority who undermine civilized standards of conduct.  For Hoffer:

"The American man in the street is now infinitely less pugnacious, less ready to take offense and hit back, than in the past.  We used to fight in the streets, in saloons and on the job.  You had to watch what you said lest you have your teeth knocked in.  But just now the majority of Americans are afraid to open their mouths. . . They are afraid to get angry."

"We need people," concluded Hoffer, "who will explode in anger at foulmouthed insults and threats."  We also need good people in New York who are not willing to "overlook insults" to organize a campaign and recall Anthony Weiner.

Our entire culture and way of life may in part depend on it.

"In all times there are people who cannot grow up, and there are times when whole societies begin to think and act like juveniles."  -- Eric Hoffer