Naomi Oreskes is the environmentalist Noam Chomsky.  She thinks that anyone who questions environmentalist doctrine is evil.  Her crusade is to expose the presumed ulterior motives of the critics.   According to Oreskes, if you question the dubious studies concerning secondhand tobacco smoke, you must be in the pay of tobacco companies.  If you question global warming, you must be working for a fossil fuel company.  If you question the DDT ban, you must part of a right wing conspiracy to weaken faith in government regulators.

Oreskes is the author of one of the silliest articles ever to appear in the journal Science.  She claimed that she analyzed 928 peer-reviewed papers on global warming and 100% agreed with the Intergovernmental Panel on Climate Change (IPCC) concerning global warming.  If you go to the website of the Nongovernmental International Panel on Climate Change (NIPCC) you can find hundreds of peer reviewed papers that disagree with the IPCC in one way or another.

Her latest book, with co-author Erik Conway, is Merchants of Doubt.  In this tedious book she treats us to the details of numerous disputes between those who subscribe to normative environmental theology and those who don't.  Normative environmental theology is the sort of theology that is preached by the Sierra Club or the Union of Concerned Scientists.  Oreskes is a professor and an important administrator at the University of California.  Like Chomsky, she cloaks her endless conspiracy theories in the machinery of scholarship.  Her 343 page book has 64 pages of notes.  A pig with lipstick is still a pig.

Neither Oreskes nor her co-author have strong scientific educations and it shows.  From her book it is obvious that she enjoyed access to many scientists, but somehow none of her scientist friends found the time to proof read Merchants of Doubt.  This is not hard to understand.  Merchants of Doubt is a book of unsurpassed monotony.  Conspiracy theories get boring very quickly, especially when the conspiracies are all variations of a few crude plots.  A number of informed critiques of Merchants of Doubt can be seen in the 1-star Amazon reviews.

In the introduction to Merchants of Doubt the fact that adding CO2 to the atmosphere causes the stratosphere to cool and the troposphere to warm is explained as follows:

But if the warming is caused by greenhouse gases emitted at the surface and largely trapped in the lower atmosphere, then we expect the troposphere to warm, but the stratosphere to cool.

It is a bit difficult to know what this sentence means but it is clear that Oreskes hasn't the faintest idea concerning radiation and the role of greenhouse gases.  Greenhouse gases (mostly CO2) are not trapped in the lower atmosphere but are well mixed up to and including the stratosphere.  CO2 causes the stratosphere to cool because CO2 is a good radiator of infrared radiation and thus improves the capability to exhaust stratospheric heat to space as radiation.  Cooling of the stratosphere is not evidence of global warming.  It is evidence of increased CO2 in the atmosphere.  The distinction is important.

Next time I see Pat Michaels at a scientific meeting, I'll be tempted to beat  the crap out of him.  Very tempted.

Oreskes, apparently before the release of the climategate emails, said this about Ben Santer:

He's thoroughly moderate...  soft-spoken, almost self-effacing ...  you might think he was an accountant...[i]

Ben Santer, who may be Oreskes' favorite scientist, has been struggling for years with the skeptics concerning the relative heating of the upper troposphere.  He has resorted to publishing papers with as many of 24 co-authors, apparently in an attempt to make his arguments more credible by collecting a lot of scientists willing to support him.

In Oreskes' milieu, it is apparently a bad thing to be anti-communist.  She attacks and psychoanalyzes the physicist Frederick Seitz for his "strident" and "unalloyed" anti-communism.  She puts thoughts in Seitz's head.  He thinks his colleagues are "ingrates" and he "has an uneasy time with the masses." He was "hawkish" and "superior." Another physicist, William Nierenberg, is also psychoanalyzed by Oreskes.   According to her Nierenberg "hated environmentalists" and was "overconfident."  Nierenberg's son Nicholas Nierenberg has been so upset by Oreskes' distortions of his father's work that he started a website to refute Oreskes.  The sin of these eminent physicists for Oreskes is that they were critics of environmental extremism and strong supporters of the United States in the Cold War.  Seitz and Nierenberg are both dead and thus cannot defend themselves.

Fred Singer is a scientist who has been in the forefront of defending science against junk science.  This is not an easy road to take.  Junk science is a basic tool for groups that are pushing ideological positions.  Subtle distinctions are not welcomed by the ideological groups.  If you acknowledge that smoking cigarettes causes cancer, but then you dare to say that the hazard presented by secondhand smoke is exaggerated, you are tagged as a supporter of cancer.  If you say that the case for man-caused global warming is full of holes you are tagged as an agent of fossil fuel companies.  Very few scientists are brave enough to take the heat and personal attacks the come from standing up to junk science.  Fred Singer has been doing it for a long time.  In his late 80's, he is still writing scientific papers and traveling the world giving lectures.  Oreskes is a promoter of junk science and for that reason cannot abide Fred Singer.  Singer is her favorite punching bag.  His name appears dozens of times in Merchants of Doubt.

Should we be surprised that Naomi Oreskes is a professor at the University of California and has been promoted to an administrative position?  After all Noam Chomsky was a professor at MIT.  But Chomsky was a professor because of his work in linguistics, not because he believes in crazy conspiracies.  It seems that Naomi Oreskes is successful not in spite of her love of conspiracy, but exactly because she promotes conspiracies.  This makes one wonder what has happened to the intellectual climate at the University of California.

The science establishment has fallen so low that it thinks it is a useful tactic to deal with its critics by accusing them of conspiracies financed by tobacco companies and oil companies.   For the last 50 years, starting with DDT, we have been subjected to junk science scares.  The scares were invariably false or exaggerated.  Most of these scares were not more than brief media sensations, but some scares have been disruptive, diverting attention from real problems.  The king of all scares is global warming.  Taken seriously, it requires revamping the entire world economy and making us all poorer.  The predictions of global warming disaster are deeply flawed junk science dressed up with an impressive "scientific" structure of panels, committees and organizations.  The global warming scare is rapidly collapsing.  Scientists outside of the global warming bubble are pointing out the flaws in the science and a coterie of well-informed bloggers is getting out the message by bypassing the establishment media where critics' voices are generally blocked.  Nature is helping because the earth and the oceans are failing to warm according to script. 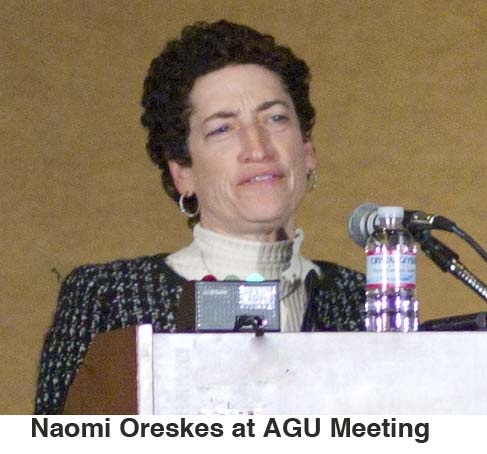 That a conspiracist like Naomi Oreskes would be welcomed by the global warming scientific establishment and invited to speak at the December 2010 American Geophysical Union meeting is a symptom of increasing desperation.  The global warming advocates have dug themselves into a deep hole and they can't seem to stop digging.  Ironically Oreskes spoke at a meeting where Exxon Mobil was the biggest financial contributor[ii].  Apparently it's not a conspiracy if Exxon Mobil gives its money to the right people.

[i] Merchants of Doubt page 1

[ii] Exxon Mobil was a titanium sponsor, the highest category.