Warning: mysqli_free_result() expects parameter 1 to be mysqli_result, bool given in /var/www/html/americanthinker/admin/common/functions/func.general.php on line 126
 Alice Walker Is Sailing in the Wrong Direction - American Thinker
|

Alice Walker Is Sailing in the Wrong Direction

Sometime within the next week or so the second, incredibly inaptly named "Freedom Flotilla" will set sail for Hamas-controlled Gaza in an attempt to break an Israel Naval quarantine whose purpose today is solely to prevent advanced weaponry from being smuggled in to known terrorists who proudly proclaim their intent to murder innocent children in the name of so-called "resistance."

One of the those ships will be The Audacity of Hope, and sailing on that ship will be a truly wonderful American writer, Ms. Alice Walker.  I have nothing but the utmost respect for Ms. Walker, whose book The Color Purple is a major piece of contemporary American literature, for which she has been justly honored.  But to paraphrase what Elie Weisel said to Ronald Reagan, when the latter chose to visit a cemetery in which SS and Nazi Officers were buried, Ms. Walker, your place is not there.

I feel a good deal of kinship with Ms. Walker.  She is sixty-seven.  On my next birthday I will be a sixty-five-year-old grandfather.  She has chosen to put her life at risk sailing with a flotilla of provocateurs; I choose to put my life at risk continuing to serve as an officer in the Israel Defense Forces.  We are, both of us, storytellers, though my writing falls short of the grace and sense of poetry I so admire in hers.  She marched in the Civil Rights Movement.  So did I.  She  stood in defiance of police batons for what she believed in.  So did I.  She maintains, and I believe her, that her greatest concern is with children.  Having lost my firstborn son at the age of twenty-two, so is mine.

In her blog, Ms. Walker could easily have been speaking for other well-meaning people who are supporting, I believe blindly, an action whose sole real purpose is to make it easier for terrorists to get advanced weaponry.  In her blog she stated as her reason for attempting to break the Israeli naval quarantine of Gaza, "We must do everything in our power to cease the behavior that makes children everywhere afraid."

The truth, however, is that this flotilla, and the actions of Ms. Walker and her compatriots, is behavior that will not only make the children of Southern Israel afraid, it will help murder them.  That is not hyperbole, nor is it a question of theoretical murder.  It is real.  It is actual, and if, Heaven forbid, they are successful in breaking the Israeli naval quarantine meant to deny advanced weapons to internationally recognized terrorists, those murders will be a byproduct of their horrifically misguided actions.

I just came back from serving in the reserves in the IDF.  Part of my duties took 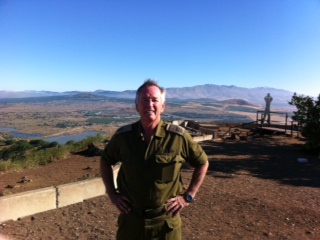 me to the border with Gaza at Nahal Oz, a kibbutz well inside the 1967 lines which are so often cited as being the key to peace in the Middle East.  I know that place well.  I was shot at one of the first times in my life there in 1963 when I was a sixteen-year-old kid.  Mind you, there were no "territories" then, no settlements, and no settlers.  The only thing that the Palestinian Fedayeen terrorists talked about "liberating" then was Tel Aviv and Haifa.  I was shot at while planting a tree.  That was my crime.  That and the fact that I was a Jew in the Jewish state (inside the sixty-seven lines, and without land swaps) which the forebears of those whom Ms. Walker and her shipmates now ally themselves, had sworn to destroy, along with every Jew in it.

On this most recent stint of reserve duty, I went to the spot outside the kibbutz where, just weeks ago, a clearly marked yellow school bus was deliberately targeted by Palestinian terrorists, with one of the more advanced antitank missiles available in the world today.  They stalked the school bus as it made its turn into the kibbutz.  This wasn't an errant shell, nor a primitive homemade rocket fired randomly in the hopes that it might hit some Jew somewhere.  This was a deliberate attempt to murder children...children about whom Ms. Walker and her shipmates say they are so concerned.  When the bus came out of the kibbutz the terrorists, not militants, were ready.  They had a clear unobstructed shot and they took it, squeezed the trigger, knowing without doubt that they were about to murder Jewish children.  Luckily, however, it was the end of the route and only one boy was still on the bus.  His name was Daniel.  Just like me.  And just as I was sixteen when I was targeted at Nahal Oz, almost fifty years ago, this Daniel was also sixteen.  The difference is I lived, through sheer luck and the Grace of God, and Daniel was burned alive.  Deliberately.  By the people whom the crew and passengers of The Audacity of Hope now seek to aid.

Ms. Walker writes that their cargo is nothing more than "letters expressing solidarity and love."  Let their ship dock at Ashdod and those same letters will be lovingly transferred by the International Red Cross by truck into Gaza, just as Israel facilitates the transfer of roughly two hundred fifty truckloads of goods and humanitarian aide per day in Gaza!

There is no blockade of humanitarian aid into Gaza.  Indeed as the deputy director of the International Red Cross has stated, there is no humanitarian crisis in Gaza!

In addition to the transfer of humanitarian aid, which Israel facilitates on a daily basis, last year some 30,000 Palestinians, mostly women and children, were admitted into Israel for treatment in Israel's finest hospitals, and the treatment they received was exactly that given to every Israeli patient.  Think of that!  Thirty thousand people, last year alone, from an entity which has attacked Israel with over ten thousand rockets and mortars.

The sole purpose of the quarantine, which the organizers of the flotilla hope to break, is to prevent the smuggling of advanced weaponry into Gaza, which could then be used against our civilian communities, well inside the 1967 lines.  This isn't theoretical either.  We have already intercepted shiploads of Iranian weapons destined for the terrorist organizations who proudly proclaim that they will be used to kill Zionists, which is a euphemism for Jews.  And the installations they most often target are schools and kindergartens.

In her blog piece Ms. Walker states that she is making this voyage in part to honor the Jewish Civil Rights workers killed in Mississippi.  She states that her husband is in fact a Jew.  I hope she has told him that the people who run Gaza have in their Charter, their binding document and their raison d'être, the following:

We look forward to the day when the promise of Allah is fulfilled and Moslems will fight and kill the Jews who will hide behind rocks and trees, until the rocks and trees call out, 'O Moslem, there is a Jew hiding behind me! Come and kill him!

Their ethos was put even more succinctly by Hamas spokesman Abu Odeh who stated, "We never target civilians.  We only target Jews."

One of Ms. Walker's most memorable characters in The Color Purple is Celie, the heart-wrenchingly poignant, beautiful lesbian.  If Celie lived in Hamas-controlled Gaza, she would more than likely be murdered by her own family in an "honor killing" for the "crime" of her sexual orientation, or at best live a life devoid of the most basic civil rights and dignity.

In Israel, by contrast, she would be invited to march in our Gay Pride Parade.  That's the difference between the regime Ms. Walker and her shipmates seek to aid, and the democratic State of Israel, whom their actions endanger.

I pray that Ms. Walker looks into her heart once again.  She's better than this.  I know she is.

In a statement most often attributed to Lenin, Western sympathizers of the Soviet regime, which murdered tens of millions of its own people, were called "Useful Idiots."  Ms. Walker is no idiot.  I pray she and the others decide not to be useful to terrorists.

Dan Gordon is a screenwriter.