The Budget: How We Got Here

By Greg Richards
Frequently, in addressing a problem, it is useful to review how one got to the position that one is in.  That is the purpose of this article.  Before we look at the story of how we got to where we are in the budget, let's just review exactly what the problem is.
Chart I shows federal budget receipts (blue line) and federal budget expenditures (red line) from 1960 through estimates for this year, 2011: 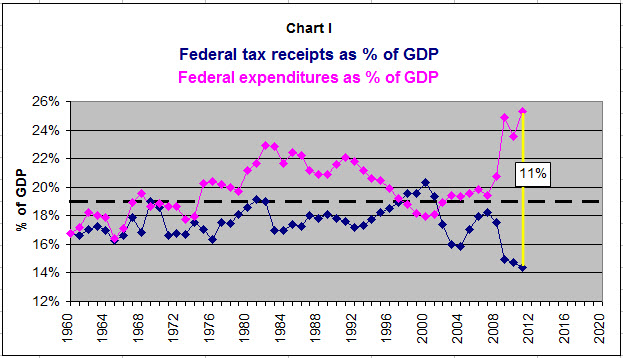 The difference between the two lines is the surplus (blue line on top) or the deficit (red line on top) for any given year.  What shows up clearly is the breakaway in the deficit in the last three fiscal years.  The deficit for 2011 is highlighted with the yellow line and the label of 11%.
That is 11% of GDP, or $1.6 trillion (GDP for 2011 is estimated at $15.1 trillion).  This is an unsustainable level for the deficit and if unchanged will ruin the country financially.  In the last three years, the three years of huge deficits, net debt of the federal government has increased by 88%.  In three years, the national net debt has almost doubled!
As can be seen on the chart, there are two components to the deficit, if one accepts that the breakeven level of federal expenditures should be at about 19%, the dotted line on the chart.  (We have addressed this subject in a series of articles which the reader can access by clicking on the name of the author at the top of this piece.)
The two components of the deficit, as can be seen on Chart I are:

In this piece, we are only addressing the 6% of GDP of excessive spending.  The reader can see from the chart that much of the shortfall in tax revenues is due to the lingering effects of the recession.  Most of the shortfall in revenues would be made up if we got back to pre-recession levels of federal taxes as a percent of GDP.
So, the question we are addressing here is "how did spending get so far out of line?"  The story of how we got to this point is suggested by Chart II (note that Chart II goes back to 1940, so it covers a somewhat longer period than Chart I): 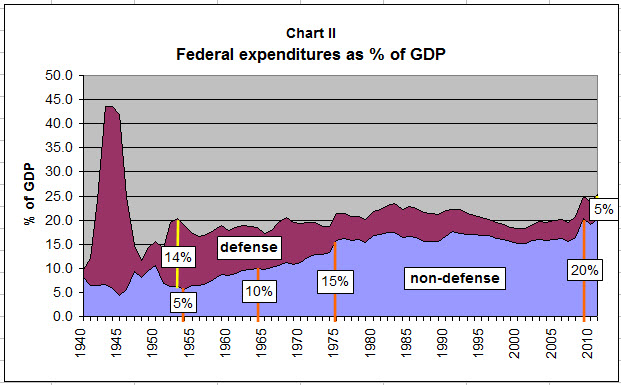 Chart II breaks the federal budget into just two categories: defense and non-defense spending.  Let's look at the two stories that Chart II tells.
First, defense.  Chart II starts in 1940, which is the last year of pre-World War II defense spending.  It was only 2% (rounding off to the nearest percentage point to avoid clutter) of GDP.  The explosion in defense spending for World War II shows up clearly as does the effort to minimize defense expenditures in the late 1940's as we demobilized.  The Korean War began in mid-1950, and the surge in spending in fiscal 1951 shows up clearly (in those days, the fiscal year ended in June, so the Korean War shows up in the fiscal 1951 numbers).  In 1950, defense accounted for 5% of GDP, but by 1953, it accounted for 14% of GDP.  The 1953 defense expenditures are highlighted on the chart with the vertical yellow line and the label "14%."
What happened after the invasion of South Korea by North Korea in June 1950 was a fear in Washington that World War III might be starting.  It was thought that the North Koreans would never have invaded without the approval of Stalin, and that this might be a feint to lure us onto the Asian mainland prior to an attack in Europe by the Soviets.  So, Congress dropped the hammer on defense spending, going through a partial mobilization, and rebuilding both the Navy and the Air Force.  These were the years of the Navy supercarrier, the B-52, the jet fighter, the H-bomb, and Cold War expenditures.
But for our story, what happens after 1953 is what is important.  Basically, the defense budget shrinks as a percent of GDP pretty steadily for the next 50 years.  There are ups and downs, but that is the general trend, with a low point hit in 2000 at 3% of GDP.  It bounces back in the first decade of this century to 5% of GDP due both to the fact that 3% was probably too low a figure and to the onset of the War on Terror.  The 5% of GDP for the defense budget in 2011 is labeled on the right of Chart II.
So, what happened between 1953 and 2011 is that the defense budget freed up 9% of GDP to be used for non-defense purposes (heaven forbid that this "surplus" should be returned to the taxpayers).  That is, 14% - 5% = 9% of GDP freed up from defense spending.
Note that in Chart II, all the way back in 1953, total federal spending was running at 20% of GDP, a level that it more or less held right up to three years ago!  Yes, federal spending did get up to a level of almost 24% of GDP during the Reagan Administration, but that proved temporary and was wrestled back down in subsequent years.  Even during the "free spending" Bush (43) Administration, federal spending ran in the 20% of GDP range, the same level as the early 1950's!
Let's look now at the blue section on Chart II, non-defense spending.  Here, we see quite a different story.  Following the New Deal spending -- 1940 non-defense spending was 8% of GDP -- and the late 1940's spending for the transition of GI's back to civilian pursuits (the GI Bill), non-defense spending in the early 1950's returned to 5% of GDP (I rounded down a bit here) in 1954, a year after the peak defense spending as a percent of GDP.
From there, we see a pretty steady increase in non-defense spending as a percent of GDP as the social insurance programs of the New Deal kick in and as they are added to in the Great Society.  Non-defense spending hits 10% of GDP in 1964 and 15% of GDP in 1975.  In spite of the Cold War and in spite of the Vietnam War, these increases in non-defense spending are offset by reductions in defense spending as a percent of GDP.
Somewhat surprising to me, for the 30+ years after 1975, non-defense spending as a percent of GDP stays relatively flat!  But, the ominous trend underneath is that the baby boomers are aging and coming up to retirement, which is happening now.  In 2009, the first year of the Obama Administration, non-defense spending leaps to 20% of GDP.  But, with defense spending now down to 5% of GDP, it cannot absorb this growth in non-defense spending, so the total budget leaps to a peacetime record of 25% of GDP, sending the deficit surging to $1.4 trillion in a single year.  In 2011, the federal budget is expected to be 25.4% of GDP and the deficit to be $1.6 trillion.  As noted above, these deficits have increased net federal debt by 88% in three years.
So that is a picture of how we got to where we are.  As I have written in previous pieces (again, click on the author's name to go to a list of them), in order to return the federal government to solvency, roughly 6% of GDP is going to have to be cut from the federal budget and the logic of the situation is that most, very likely all, if this has to come from the non-defense accounts, as spending 5% of GDP on defense is probably necessary to maintain our "peace through strength" strategy.
While government operations and compensation will need to be cut, the word to key off of in looking at the biggest problem -- entitlements -- is restructuring.  Simply "cutting" without restructuring is not going to do it.  Most likely, the first step will be means-testing all entitlements.  Whether Washington has the heart and the stamina to go back into these programs with "jacks and timbers" and really understand them piece by piece we shall see.  Washington's inability to manage at a granular level is one reason why we do not want it expanding any further into the private economy.
So, that is where we are.  The two ideas that we need to keep in front of us are "6% of GDP" in terms of cutting and "restructuring" in terms of methodology.
|