By Greg Richards
The national debt is calculated in two ways: gross debt and net debt.  Net debt is primarily gross debt net of the various government "trust funds" the largest of which is Social Security.
To start, let's look at gross federal debt: 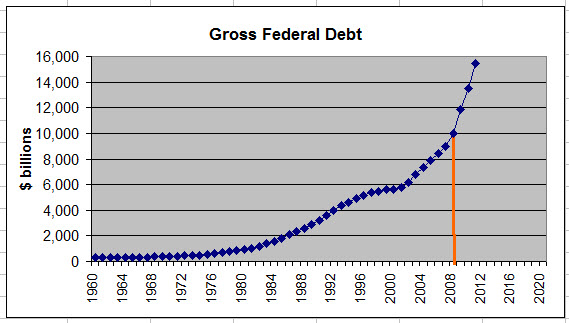 The orange vertical line is at 2008, the last year of the Bush (43) Administration.  As the reader no doubt expected, there is a hockey stick effect in the last three years, where the Federal debt grows at about twice the rate of the previous decades.  In the three years from 2008 to 2011, gross federal debt grew by 55% from $10.0 trillion to an estimated $15.5 trillion.
We can get a better look at the strain this puts on the country's future by looking at gross federal debt as a percent of GDP: 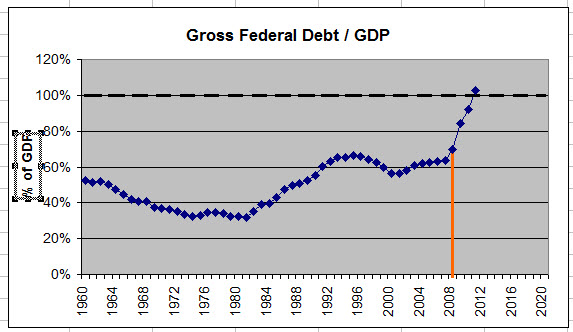 In the last year of the Bush (43) Administration, at the orange line, gross federal debt / GDP was approximately 70%, a record high for the period shown up to that time, but since then this figure has surged to an estimated 103% at the end of fiscal 2011.
I have used the period 1960 - 2011 throughout these analyses because that seems to be the relevant period both in terms of modernity and of when entitlements started to grow significantly.  However, the reader will want to know that gross federal debt / GDP has been much higher historically.  The ratio for 1946 of gross federal debt / GDP was 122%, which is the highest it's ever been.  Of course, 1942 - 1945 were the years when we ran Old Glory up the flagpole and threw everything we had at the enemy.  All the numbers for World War II -- federal spending / GDP, deficit as a % of federal spending, etc. -- are off the charts.
The debt in 1946 was the financial result of that.  Like all countries throughout history, we didn't pay that debt off, but what happened between 1946 and 1974 was that the economy grew faster than the federal debt, so the ratio declined from 122% of GDP in 1946 to 32% in 1974.  This figure double bottomed in 1981 at essentially the same level.  Note that the supposedly horrifyingly financially dissolute years of the Reagan Administration look pretty tame on this chart compared to where we are now!
The government calculates net interest payments not gross payments, so let's look at net federal debt.  The principal difference between gross debt and net debt is the "trust funds" the government holds.  The government does not actually save a stock of capital in the trust funds.  Instead it issues its own paper to those funds and then spends the money collected for them in the year in which it receives that cash.  Any private enterprise that operated this way would find all the principals in jail.  But that is government accounting.  The problem is, of course, that when the government goes into the trust fund to draw on the assets of the fund, those assets are government IOUs whose value is supported only by the current ability of taxpayers to pay, not their past ability to pay when they were "contributing" to the trust fund.
There is a very important point here, and it is one that surprisingly is in our favor.  We are already contemplating -- and experiencing -- the need for the government to pay for its entitlement programs out of current income.  Because this is the case, we can net out the debt in the trust funds!  We can simply cancel it out because we are already, in these essays and in government budgeting, absorbing the necessity of paying obligations out of current and future tax revenues with no benefit from past "saving" in the "trust funds."  I know, it is a little like a John Le Carre novel.
Net federal debt looks like this (using the same scale as in the Gross Federal Debt chart above): 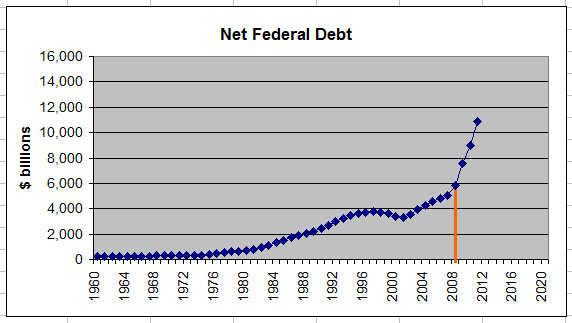 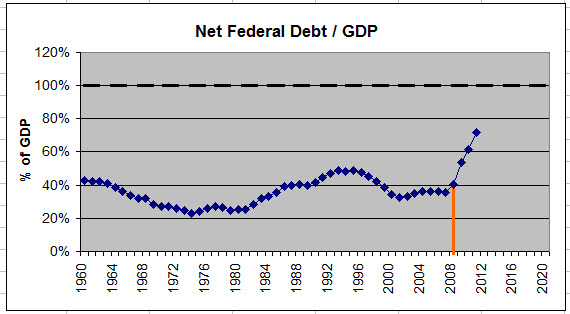 Not quite as bad as gross federal debt / GDP!  Gross federal debt is an estimated 103% of GDP at the end of fiscal 2011, while net federal debt, which as noted above we think is the more relevant number, is estimated to be "only" 72% of GDP at the end of fiscal 2011.  But of course, it is the rate of growth of this figure more than its absolute level that is so alarming.  It is just worth being aware that we have not destroyed the finances of the country...yet.
Lastly, let's take a look at net interest payments by the federal government.  To do this, let's first look at the average net interest rates paid by the federal government on its net debt: 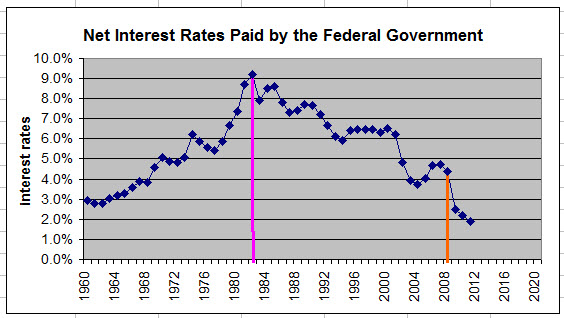 As with the other charts, there is an orange vertical line at 2008, the end of the Bush (43) Administration.  But there is also a purple vertical line at 1982, which was the peak year for interest rates in the last generation.  Essentially for the past 29 years, interest rates have been declining, which means that bond prices have been rising. It was partly due to this "can't lose" bull market in bonds that the housing bubble occurred.
The drop in interest rates since 2008 is very sharp, mostly due to Federal Reserve policy, which is beyond the scope of this essay.  What the reader should take away from this chart is that interest rates are unusually low and that because of this the burden of the exploding federal debt is much less than it would be with "normal" interest rates, which are certain to return within the foreseeable future.
Here is the chart of net interest payments by the federal government: 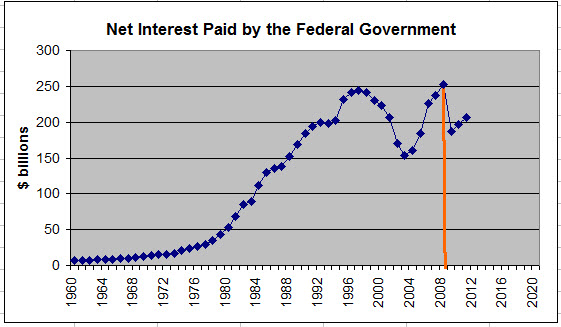 Interest paid by the federal government has been surprisingly well-behaved because of the sharp decline in interest rates.  We are now at the lows for interest rates as best we can tell.  They can only go up, and will go up in the foreseeable future.  The $200 billion being paid in interest in 2011 could easily jump to $400 billion or even $600 billion without interest rates being outside of historical norms.  Interest rates are a help in the budget now, but a danger for the future -- they are currently understating the cost of debt that the federal government carries.
So, as measured by net federal debt, we aren't dead yet, but the growth in debt due to the extreme structural imbalance in the budget is very dangerous to the future health, even the survival, of the country. When interest rates start to return to their historic levels is when the pain will be undeniable.
|