Adventures in the Climate Trade 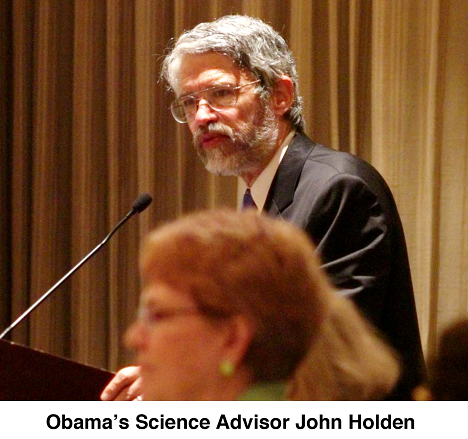 I had the experience of attending a 3-day meeting of this federal advisory committee at a hotel in Washington, DC.  Meetings of federal advisory committees are open to members of the public such as myself.  The welcoming speech was given by presidential adviser Holdren.  Most of the public attendees were professional climate change people, either working for the government or non-profits.  The outside experts on the federal advisory committee were overwhelmingly academics professionally engaged in promoting or interpreting the alleged imminent global warming catastrophe.  There did not appear to be any member of the committee even mildly skeptical of the global warming catastrophe story.  This was surely not an accident.  I was told that every member of the committee had to be approved by the White House, presumably by John Holdren. 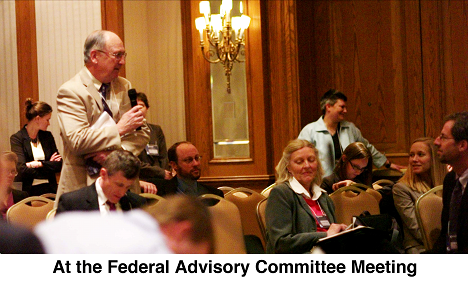 The organizers were very welcoming to the members of the public.  For a fee we were able to participate in the lunches and coffee breaks.  A majority of the key staffers were women and that might account for the welcoming and friendly atmosphere.  But even nice people have been known to waste taxpayers' money.
Those who work for the global warming juggernaut realize that public opinion and elite opinion are turning against them.  For this reason there is a new emphasis on propaganda, called communication inside the climate change bubble. The climate change workers seem to think that people outside of the bubble can be won over if the message is dumbed down enough.  For example, instead of the traditional term "greenhouse gases" we now have "heat-trapping gases."  In order to make the global warming predictions of doom more meaningful the USGCRP will issue personalized predictions of doom for various regions of the country.  These regional predictions will be based on downscaling studies.  Downscaling is a complicated scheme for supposedly extracting regional long term climate forecasts from global climate models.  The global climate models disagree with each other concerning global climate trends and often their predictions are contradicted by reality.  Extracting regional forecasts  from the dubious global forecasts requires extensive adjustments to the data in order to get anything remotely plausible.  Downscaling lacks a convincing scientific basis.  But, downscaling studies are very popular because they can be sold for cash to credulous local governments. 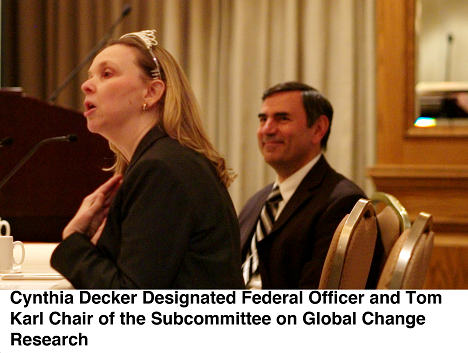 The global warming observed over the past 50 years is due primarily to human-induced emissions of heat-trapping gases.

This statement could be called the fundamental theorem of global warming alarmism.  If it is not true the whole house of cards collapses.
The evidence for the fundamental theorem is runs of various clashing computer climate models.  The scientists who have fertile imaginations when imagining all the bad things that global warming will do are unable to think of anything that could have caused the warming of the last 50 years except CO2 and the other greenhouse gases.   But, early in the 20th century from 1910 to 1940 there was a very similar warming not caused by greenhouse gases.  Back then greenhouse gas generation was in its infancy.  Neither the scientists nor their computers know what caused the early century warming.  If the scientists can't explain the early century warming why are they so quick to pin the late century warming on greenhouse gases? There are plenty of alternative explanations available such as cosmic rays or oceanic climate cycles.  But, if global warming is not our fault and we are the helpless victims of nature, we wouldn't need the climate change industry. Restraining their imaginations is a precondition for continued employment.
The 2009 crystal ball assessment report recites the dubious claims of global warming disaster so loved by the popularizers of environmental doom.  The cute polar bears will die.  We'll all get tropical diseases if we don't die in heat waves.  Agricultural productivity will suffer from weeds, droughts and floods.  The sea will rise up and flood the coasts.  This stuff has been refuted by angry experts many times, but no matter, some stories are too good to check.  No doubt we are in for more of the same with the new report to be published in 2013.

Norman Rogers is a Senior Policy Advisor at the Heartland Institute, a Chicago-based think tank. He is a member of the American Geophysical Union and the American Meteorological Society. His personal website is www.climateviews.com

[i] Pacific Gas and Electric residential tier 5 is $0.403 per kilowatt hour for usage 300% over baseline allowance.( http://www.pge.com/tariffs/tm2/pdf/ELEC_SCHEDS_E-1.pdf ).Compare this to the U.S.  residential average of $0.1104 per KWH and many states with average costs between 8 and 9 cents per KWH.  ( http://www.eia.doe.gov/cneaf/electricity/epm/table5_6_a.html )
[ii] The California Air Resources Board wrote an allegedly scientific analysis of the wonderful results that would follow for the California economy from draconian greenhouse gas limitations.  The Board was mandated by law to obtain a peer review of their report.  The 4 peer reviewers, all hired hand professors, demonstrated that there are limits to corrupting academics with money.  They all said, not very politely considering the source, that the Board's economic analysis was garbage.  The Board ignored them.
http://www.ab32ig.com/documents/peer_review_comments_arb_responses.pdf
|