On the O'Reilly Factor TV show, Dennis Miller was asked his thoughts regarding the media's response to Obama's numerous flip flops.  Miller said the media will report whatever Obama does in a positive light.

We patriots are well aware of the liberal media's love affair with Obama.  And yet, for some reason, the reality of Miller's comment hit me hard right between the eyes.  I thought, "Oh my gosh. This is not funny. Our country is in serious trouble."

Not only must we defeat the Obama administration, we must take on and defeat the liberal mainstream media as well; take on the two powerful well-funded entities committed to the fundamental transformation of America. Lord, help us! 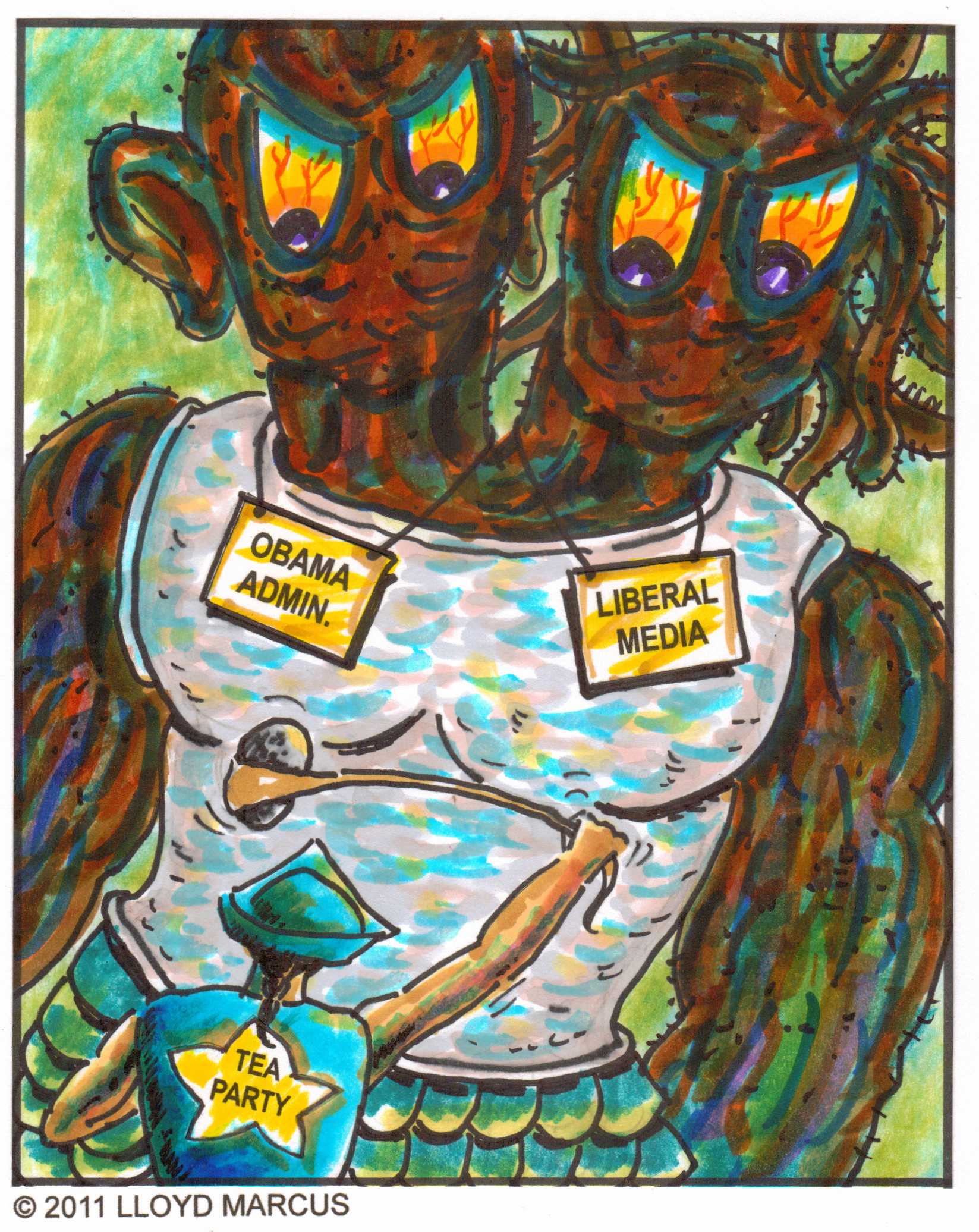 Patriots, we can, will and must defeat this two headed evil Goliath.  Despite the left's shock and awe public relations slanderous attacks on the tea party and our candidates, we took the House of Representatives.  Thus proving, they can be beaten!
I am so sick of advisors cautioning us conservatives to walk on eggshells when dealing with the liberal media.  It has even been suggested that we stop using the term "tea party" due to the negative image created by the media.
Patriots, even if we change our name to the "Happy Go Lucky Nice People Movement," we will still be targeted for destruction by the media.  What part of they hate us and want us to fail do our advisors not understand?  The liberal media is going to put a negative spin on whatever we say.
Now, am I advocating saying stupid provocative things?  Of course not.  I am advocating fearlessly and aggressively attacking Obama's horrific record.  Call out the liberal media on their biased reporting.  Stop allowing the Democrats and their media minions to set the rules of engagement.  Patriots, the stakes are far too high to wimp out foolishly seeking approval from those actively pursuing our total destruction.
Again, I say, what do we have to lose by confronting the democrats and the liberal media?  They are going to trash us regardless.
Yes, they will call you a racist.  I say this in love: "Get over it."  Throughout U.S. history many have suffered far greater and paid the ultimate sacrifice.  Why?  Because America is worth it.
Tons of articles have been written calling me a stupid self loathing n****r, an Uncle Tom, a tea party minstrel, a traitor, a sellout, and a clown.  It all rolls off my back.  I know I am on the right side.  So, why should I care what evil stupid people say or think of me?  But most of all, my strength and peace comes through knowing God is with us and America is worth it.
Like little David in the Bible, we must boldly confront the two headed Goliath, Obama administration/liberal media.
Why do you think Trump and Palin are doing so well in the polls?  Both are boldly and unapologetically takin' it to Obama and are not kowtowing to the liberal media.  Patriots are frustrated with Republicans pandering and trying to "play nice" with a Democratic Party and liberal media who are relentlessly and viciously attempting to kill us politically.  The Democrats and the liberal media take no prisoners.
Rush Limbaugh says the Democrats and liberal media will tell you who they fear most by the intensity of their attacks.  Who have been numbers one, two, and three on the Democrats' and liberal media's list?  Answer: Donald Trump, Sarah Palin, and the Tea Party.  Brothers and sisters, we can beat them!
How do we defeat them?  In addition to ceasing to fear Obama and his liberal media co-conspirators, we must continue doing what we have been doing.  Patriots must continue following their passion and using their gifts and talents wherever needed in our extraordinary divinely inspired Tea Party Movement.
We are blessed with great minds on our side; patriots are writing books, organizing and conceiving various strategies to take back our country.
While some lament that we lack a central leadership organization or charismatic leader, I am grateful for all of our numerous patriot groups and committed individuals.  Each is driven to politically defeat Obama in its own way.  Their spirit is the tea party.
Just as God's grace guided David's stone to topple Goliath, our stone of truth, honor, and freedom will hit its mark and bring down the two headed evil Goliath of the liberal media and the Obama regime in 2012.
Lloyd Marcus, Proud Unhyphenated American
"Campaign to Defeat Barack Obama 2012". Please join us!
Please sign and encourage your friends to sign this petition at http://www.ipetitions.com/petition/1milliontodefeatbarackobama
LloydMarcus.com
Spokesperson & Entertainer of Tea Party Movement & Tea Party Express.
The American Tea  Party Anthem CD/album.
Confessions of a Black Conservative, written by Lloyd Marcus & foreword by Michelle Malkin
President, NAACPC (National Association for the Advancement of Conservative People of ALL Colors)
Join Lloyd Marcus Facebook Page
Tea Are The World, "Taking Back America" The Making of Documentary... The MUST SEE Tea Party Historic Conservative Music Event!
|