Warning: mysqli_free_result() expects parameter 1 to be mysqli_result, bool given in /var/www/html/americanthinker/admin/common/functions/func.general.php on line 126
 A $500 Million Dollar Car? - American Thinker
|

By Isaac Martin
Cars and numbers, like dimensions, mpg, and prices, naturally intersect. Then there's a number like $529 million tax dollars that jumps out and therein lies our story. It begins with Fisker Automotive's Karma previewed at the Auto Club Speedway in Ontario, CA.  in the March 21 print issue of AutoWeek. With a suggested $95K price tag, the Karma plug-in hybrid is a four-door luxury Chevy Volt for rich people. 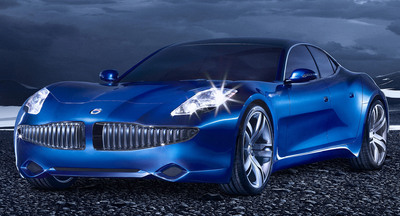 Wheelbase is 124 inches, which is full-size car territory. Curiously, overall length isn't listed nor is vehicle weight listed. Fisker's staff, the article explains, wouldn't offer an estimate citing continuing development. That's not a good sign, since that could mean it's higher than they would like and they're scrambling to reduce it.
The car was only driven on facility courses and not on the highway. Handling was described as "stable and predictable," which doesn't say much for an exclusive sports sedan.
Driving the rear wheels are two electric motors. They receive power from a 20-kilowatt-hour lithium-ion battery pack that weighs 600 pounds. Also generating current for the motors is a 175-killowatt generator. Driving the generator is a 260-horsepower, turbocharged 2.0L GM four-cylinder Ecotec engine. The Fisker starts on battery power, which as current drains, switches over to electrical current from the engine driven generator.
The preview explained that Fisker suggests that if drivers limited themselves to 50 mile round trips, then the gasoline engine would never need to run. Hence, wealthy people could be freed from rapacious oil company greed. But there's the battery range issue. Like the Volt, Fisker's battery-only range doesn't include a description of driving conditions. Would the range be the same if the temperature were 20 degrees? What average speed is battery range based on?  I suppose that tax money was "invested" in battery development. If so, there appear to be no major advances -- otherwise Fisker would be heavily promoting that.
They also maintain the Karma can deliver 67 mpg. Do rich people worry about mileage? Some owners would be concerned about their carbon footprint, so driving a Karma would help offset their private jet's footprint. Ironically the Karma would qualify for a federal tax credit, which would be a tax break for the rich.
Ultimately, Fisker Karma performance numbers need to be tested to determine what $95K buys. When a car magazine gets a test vehicle, it needs to weigh it. Then put it on a chassis dyno to see what measured rear wheel horsepower and torque is. Next, make some quarter-mile passes and laps on the Speedway road course. It needs to be driven. Las Vegas, despite the President's past pronouncements, would be a good destination. It would allow driving the Karma on I-15 during an LA get-away Friday night when 80 mph is the de facto speed limit.
My suspicion is that the Fisker Karma will be playing kinetic (to borrow a White House term) catch up with its competitors, like the Porsche Panamera (list $74K) or the Mercedes-Benz E63 AMG  (list $87K) or even a humble, but very competent Audi A6 sedan (list $45K).  Any of these cars would offer better performance and driving value.  In case you think Karma production will add American jobs, a report indicates that it'll be built by Valmet Automotive in Uusikaupunki, Finland.
Now back to the $529 million figure. Barry Winfield's report characterized development costs as:
"And it took a sack full of cash for development costs, some say a billion dollars, $529 million of it from U.S. Department of Energy Clean Technology loans."
That cost quote appeared in the print edition, but it's not mentioned on AW's website Flash Drive Karma page.  A related AW web page reported that, "Closely held Fisker last year closed on $529 million in loans from the U.S. Energy Department that will fund construction of its Nina production line." It appears consumers got two car lines for one government loan.
Nina's list price is $39K and production will occur in a former Delaware GM plant. Did Fisker management know that vice president Biden is from there? Could there be an appearance of crony capitalism involving "closely held" Fisker? Or is this what they call picking economic winners and losers?
What about the Nina? No details are provided, but let's speculate. It's a four-door sedan and so is the Chevy Volt. I suspect it'll be a plug-in hybrid, like the Volt. Will it be bigger with more interior room? Will it be lighter by using exotic carbon fiber in the chassis? And of course, will workers be non-union or UAW?  Ironically, this may be the car Obama thinks Americans should trade their existing vehicles for in order to cope with $4 gallon gasoline.
So with all the budget battles, this spending went unnoticed. But it indicates two  things. One is that Obama and progressives want to force a green economy no matter the cost, since it's only tax money. The second is that half a billion tax dollars the government's new chump change.
|