Warning: mysqli_free_result() expects parameter 1 to be mysqli_result, bool given in /var/www/html/americanthinker/admin/common/functions/func.general.php on line 126
 Who Will Buy the World's Government Bonds? - American Thinker
|

Who Will Buy the World's Government Bonds?

By Paul B. Matthews
In the wake of the Japanese earthquake and tsunami, the world's media has become fixated on the Japanese nuclear disaster in Fukushima.  On top of the massive human, material and environmental destruction, the economic reverberations that may soon engulf Japan, Western Europe, and the United States as a result of these natural disasters will be potentially horrific.
Japan's 9.0 earthquake triggered unprecedented damage across the northern part of the country.  An estimated 70,000 homes were damaged or destroyed.  Moreover, an estimated 10 to 20 percent of the nation's electrical generating capacity was temporarily knocked off-line and an estimated 5 percent was permanently destroyed.  Thousands of miles of road and hundreds of bridges were severely damaged or destroyed and nearly 400 miles of shipping channels and harbors were made temporarily inoperable.
In lieu of this unprecedented destruction, Keynesian economists are salivating at the thought that all of the expected government repair spending will finally allow Japan to escape its 20-year fight with that evil nemesis "the Liquidity Trap."
After the quake, Paul Krugman wrote on his blog:

And yes, this does mean that the nuclear catastrophe could end up being expansionary, if not for Japan then at least for the world as a whole. If this sounds crazy, well, liquidity-trap economics is like that - remember, World War II ended the Great Depression.

Meanwhile, during an interview on CNBC, Larry Summers, a former economic advisor to President Obama, suggested the earthquake would likely temporarily boost Japanese GDP, just as occurred following the nation's 1995 Kobe earthquake.
Unfortunately for Mr. Krugman and Mr. Summers, it is not 1939 or 1996.
Currently, Japan's national government debt stands at over 9.19 trillion yen (US$11.3 trillion) or 220% of the nation's gross domestic product (GDP).  In contrast, following the Kobe earthquake, Japanese government debt stood at around 3.3 trillion yen, or about 50% of Japanese GDP (at the time of the quake).
Although Japanese government debt has increased three-fold during the past 15 years, Japanese interest rates have remained incredibly low.  In fact, a 10-year Japanese Government Bond (JGB) currently yields around 1.30%.
In spite of this unprecedented and growing debt burden, Japanese interest rates have remained low for three primary reasons:
Figure1-2: Japanese Consumer Prices: Change from the Previous Year 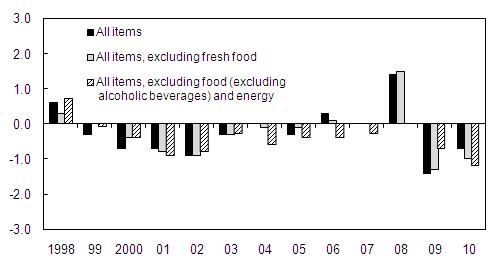 However each of these factors, which have sustained low domestic interest rates for over a decade, were already in the process of shifting negatively for Japan well before the earthquake.  Unfortunately for the Japanese, recent seismic events will likely exacerbate this on-going negative transformation.
Since the late 1990's, Japan's savings rate has steadily declined from over 10% in late 1990's to around 2% today.  The primary cause for this shift has been changing demographics -- as Japan has aged, the propensity of its people to save has steadily declined.
In fact, Japan became the world's oldest population over five years ago.  Today, the median citizen is 44.8 years old and an estimated 22.9% of the population is over the age of 65.  Moreover, demographers expect these trends to worsen because of Japan's notorious low birth rate and nonexistent immigration policy.  Consequently, the Japanese national savings rate likely will turn negative in the near future as a growing number of pensioners draw down savings during their retirement years.
As Japan's national savings rate approaches zero, the nation will need to shift to foreign credit markets in order to simply rollover maturing government debt.  Furthermore, as Japanese insurance companies begin to settle claims on earthquake damage, these natural domestic buyers of JGBs will sharply reduce new purchases, further increasing the need for foreign investor participation.  Lastly, the supply of new JGBs is likely to substantially expand, particularly as the government embarks on various public works projects to repair damaged infrastructure.  As domestic demand for JGBs withers, foreign buyers will be needed to absorb this added supply.
As more JGBs are sold internationally, foreign investors will drive up the average interest rate paid on JGBs, especially if the nation's period of deflation ends.  In fact, if consumer prices stopped declining and began to rise by a paltry 1.0%, 10-year JGB rates would likely rise by 150 basis points to around 2.80%.
Given the massive disruptions to electrical production capacity, Japan out of necessity will need to import much larger quantities of oil and natural gas in order to meet its electrical needs.  This fact will reduce the nation's long-term trade surplus and reduce upside pressure on the Yen.  Moreover, given supply constraints that already exist in the energy space, Japan's need for energy-related natural resources alone will likely end the nation's prolonged period of deflation.
The ramifications of Japan shifting from a net creditor nation to a net debtor nation, along with the prospects of higher Japanese interest rates should be quite worrisome -- particularly for American politicians who intend to sell an additional $10-$12 trillion of new government debt over the next decade.
Moreover, Western Europeans, already heavily reliant on Japanese creditors to fund the government debts in Portugal, Ireland, Greece, and Spain, may face another round of credit market uncertainty.  In fact, such concerns have already entered the European debt markets as German Bund spreads against the so-called "PIGS" have widened to historic levels in recent days as concerns of a renewed European debt crisis have intensified.
Perhaps the final nail in the coffin for the Japanese, American, and Western European economies will be the impact higher interest rates have on already bloated government budgets.
Presently, Japan and America have benefited from extremely low levels of interest rates.  In the United States, total government interest payments have remained fairly stable at around $400 billion since 2006, equating to an average interest rate of below 3.00%, even though $3 trillion in new government debt has been added by the Obama administration in just the past two years.  In fact, significant amounts of recent US government debt have been sold at the short-end of the market, where interest rates are well below 1%.  Meanwhile in Japan, where the average government interest rate is around 1%, interest payments alone already consume over 25% of all government tax receipts.
Consequently, if Japanese and American national interest rates were simply to rise by two percentage points, it would materially impact each nation's ability to service its debt.  In the US, this would add over $280 billion to our national debt (per year).  However, in Japan, interest payments could easily consume over 75% of all government revenue unless tax revenues substantially increase.
Given this backdrop, it is no wonder why Bill Gross, the world's largest bond portfolio manager, recently sold his entire portfolio of US government bonds.
Of course, given the implicit mathematics of a small increase in nominal interest rates, combined with the prospect of continued unprecedented issuances of new government debt in both the United States and Japan, one must now ask the questions:
"Who is going to buy all the world's government bonds?" and "At what Interest Rates will we Pay?"
Given the anemic economic recovery and the abysmal level of job creation in the United States, these are questions Americans should not be asking.
Paul Matthews is a Texas CPA and a former hedge fund manager.  He resides in Austin, TX and can be reached at pbmatthews1@gmail.com.
|