Warning: mysqli_free_result() expects parameter 1 to be mysqli_result, bool given in /var/www/html/americanthinker/admin/common/functions/func.general.php on line 126
 The Social Security Trap - American Thinker
| 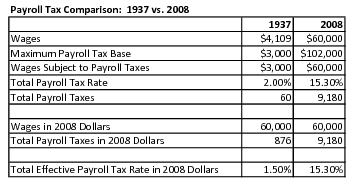 As you can see, the total annual payroll taxes for the worker in 2008 are more than 10 times the total payroll taxes for the worker in 1937 -- $9,180 compared to $876 in 2008 dollars.  This is a lot of money especially for workers whose income is insufficient to generate an income tax liability.  Payroll taxes are brutally regressive for the lowest income workers.
The fact that the company and employee each pay one-half of the payroll taxes does not change the underlying reality.  The taxes collected are assumed to be set aside for the employee's future benefit.  If the employee has no job, there are no payroll taxes for him.  If he gets a job, 15.3% of his/her salary rate goes to the government to theoretically provide this worker's benefits upon expected retirement at 65.
And guess what, most of you reading this will never receive the full value of having paid payroll taxes for as many as 45 years.  And, the younger you are, the worse will be the value of any future benefits. Young people should be especially demoralized by the current condition of the Social Security Trust Fund.  According to the 2009 Annual Report of the Board of Trustees of the Federal Old-Age and Survivors Insurance and Federal Disability Insurance Trust Funds (i.e.-Social Security):
Under the intermediate assumptions, OASDI cost will increase more rapidly than tax income between about 2019 and 2030 because the retirement of the baby-boom generation will cause the number of beneficiaries to rise much faster than the labor force.  After 2030, increases in life expectancy and the continued relatively low fertility rates experienced since the baby boom will generally cause Social Security system costs to increase relative to tax income, but more slowly.  Annual cost will exceed tax income starting in 2016, at which time the annual gap will be covered with cash redemptions from special obligations of the Treasury that make up the trust fund assets until these assets are exhausted.
To illustrate how bad this Ponzi scheme against all payroll taxpayers is, you have to ask yourself the question.  Supposing I had been able to save all my Social Security payroll taxes myself, how much money would I have at retirement when I turned 65?
According to the Social Security Administration benefit as of January 2009 after the cost of living adjustment of 2008 was $1,153 per month.
Suppose an earner began working in 1963 (age 22) and retired in 2008 at age 67, the full retirement age at which you can receive full Social Security benefits.  Suppose he earned the median income of the United States for each of the 46 years, starting at $4,848 in 1963 and ending at $36,790 in 2008.
And then suppose that instead of being sent to the government, he kept his payroll and the payroll taxes paid on his behalf by his employer and invested them in 1-year United States Treasury securities at actual market rates over the 46 years.
This earner would accumulate $290,023 by retirement.  With a 5% annual withdrawal rate, which is typical of an institutional endowment, he could withdraw $14,501 per year, or $1,208 per month, which is slightly more than the average monthly Social Security benefit.
But although the monthly benefit would be similar, the earner who had the money in his own account would have $290,023 in principal at retirement that could both provide his monthly income and even grow beyond that over time, assuming the corpus earned more than the 5% withdrawal rate, which is not an unreasonable assumption.  On the other hand, the earner who was dependent on Social Security would have zero principal and would have to live under the uncertainty that his monthly benefits might be affected by the looming insolvency of the system.
What if the earner had invested his payroll taxes in 6-month CDs at actual market rates over his 46-year career?
He would have accumulated $306,862, from which he could draw a monthly income of $1,279, or 11% more than from Social Security, and still have substantial principal that could grow over time, and that he could leave to his heirs or to charity when he died.
Thus even if payroll taxes had been invested in the safest, most conservative securities, the earner would be much better off than he would be in the Social Security system.
What if the payroll taxes were invested in domestic stocks, the S&P 500 at the actual market return over the 46-year period?  The earner would have accumulated $695,303, from which he could draw a monthly income of $2,897.  This is two and a half times the Social Security monthly income.  And the earner would have $695,303 in principal that could grow over time.  To summarize:

The data are clear.  A worker earning the median wage over the 46 years ending in 2008 would have been much better off investing his payroll taxes in even the most conservative securities than paying into the Social Security system.
The same holds true of an earner who paid the maximum into Social Security, who earned $4,800 in 1963 and retired in 2008 after earning $102,000.

Again, the retiree is always much better off keeping and investing his or her own money rather than paying payroll taxes and letting the government promise him a "benefit."
Now there is no question Social Security is a Ponzi scheme.   Entitlements are clearly a rip-off for everybody.  They are especially bad for payroll taxpayers whose income is insufficient to result in an income tax liability.
Thus, the political class is loath to let the word "entitlement" cross their lips.  Why?  Because they have consistently misrepresented what Social Security really is. It is supposedly an insurance system, but unfortunately for payroll taxpayers, one whose current receipts are always inadequate to pay for the expected future liabilities.  Or, you could say that the government could never tax you enough to provide a retirement for both you and somebody else.  And the real crime is that, while for the limited period that current receipts exceeded current expenditures, they just spent the excess receipts on other government programs to promote their political power.  They put an I.O.U. in the Social Security Trust Fund amounting to these other expenditures.  But, the only way the I.O.U. can be repaid is by collecting more taxes.  They must think we are fools.
Entitlements were in fact crafted by shrewd politicians who expected to earn voter loyalty during the early years (e.g.-Social Security) while receipts exceed outflows.  In the later years, payouts exceed receipts, thereby threatening promised benefit payments and threatening the voter loyalty previously generated.
Entitlements can only be killed off when the political class honestly proclaims the truth that you will always be better off saving your own money for your retirement and for your own health care.  The dirty little secret is just how much money all workers have been paying in payroll taxes during their working careers, and how little of it they will receive in benefits.   Now you know why the political class does not want to talk about entitlements.
This is the message to American workers:  you are always better off to keep and save your own money!!
Thus, government sponsored saving accounts, enhanced IRAs and 401K plans and enhanced Medical IRAs are the way to get a lot more real savings for everybody.  People who have paid their payroll taxes for as long as 45 years deserve to get the benefits they paid for with their own money.  And remember, young people are especially taken advantage of by any government entitlement.
When American workers have taken possession of their own payroll taxes, the only people who will then be worse off are the political class that spent our payroll taxes to maintain their political power.
Fred N. Sauer is an American patriot, St. Louis resident, and businessman whose blog can be found at www.americasculturalstudies.com or www.fredsauermatrix.com.
|