Warning: mysqli_free_result() expects parameter 1 to be mysqli_result, bool given in /var/www/html/americanthinker/admin/common/functions/func.general.php on line 126
 Let the American People Vote on a Recovery Plan for the Economy - American Thinker
|

As we wallow our way through towards economic recovery from has now been the longest recession since the Great Depression, the Obama Administration continues to impose policies that are completely detrimental to a successful long-term recovery.  Some of these are:

● The Gulf of Mexico drilling moratorium;
● Increasing cost of energy for people and businesses by EPA regulations of carbon emissions;
● EPA regulation on the use of fracking fluids in the production of shale gas;
● A tightening regulatory framework that is harmful to business;
● The passage of Obama Care which will result in a new entitlement program that lacks the necessary funds for full implementation without radical cuts and rationing of services for older Americans at the time they most need health care.  And like Social Security, Medicare and Medicaid, Obama Care is a program that lacks the necessary funding absent ever increasing taxation to remain solvent;
● Financial regulation reform by the Dodd-Frank Wall Street Reform and Consumer Protection Act passed by Democrats last year that subjects taxpayers again to "too big to fail."  This will encourage excesses again in the financial sector by exculpating responsible institutions whose executives will not suffer any consequences;
● Regulation of the internet; and
● The attempt to impose "card check" to defeat the secret ballot in union representation elections.
And how have Americans benefitted from the massive expansion of government under President Obama?  In short, not well.

In addition to the high unemployment and underemployment numbers the first two years of the Obama Administration, the number of people on food stamps has dramatically increased.  In fiscal years 2009 and 2010, monthly participation in the federal food stamp program averaged 33.5 million Americans and 40.3 million people, respectively.  And, so far, in fiscal year 2011, the average monthly participation has increased further to over 43.6 million people.
President Obama has doubled down on the failed Keynesian policies of large deficits and massive government spending in an unprecedented short period of time.  It took over 200 years for the United States to acquire a public debt of $5.8 trillion dollars.  The Obama Administration will double this public debt in just 4 years.  This debt arose from the "crammed down" passage of the absurd $800 billion Obama Stimulus Bill at the outset of his administration.  And every spending bill and proposed spending thereafter.
The annual budget deficits for 2009 (actual), 2010 (actual), 2011(pro forma) and 2012 (pro forma) are $1.414 trillion, $1.294 trillion, $1.480 trillon, and $1.100 trillion, respectively.   There never seems to be a solution to these massive deficits and accumulation of debt, because Congress and the President are unwilling to make the hard choices necessary. 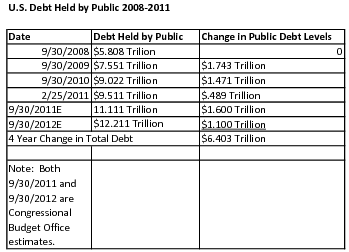 We cannot help but repeat that to get to the 9/30/2008 total, it took America over 200 years!  In just 4 years though, the Obama Administration will more than double our publically held debt to an estimated $12.211 trillion from $5.808 trillion.  To any person involved in the real world, this is a self-evident catastrophe.
Then to add more agony to our fiscal problems, the Federal Reserve is printing massive amounts of money by means of a process called Quantitative Easing.  During this process, the U.S. Treasury Department issues publically held bonds to continue financing its burgeoning deficits.  These bonds issued by the Federal Government are then purchased by the Federal Reserve Bank with newly created dollars.  With price levels, especially for food and fuel rising around the world, the Federal Reserve is confident that purchasing $600 billion of the U.S. government debt will not be inflationary in spite of evidence to the contrary from all over the world.
The Stagflation Economy was invented under the Carter Administration when inflation peaked at an annualized rate of more than 12%, and the yields on 10-Year Treasury bonds peaked at over 15%.  Stagflation is defined as the inflation rate plus the unemployment rate.  Stagflation is one thing with a debt to GDP ratio of 30%, but it is quite another thing with a debt to GDP ration of 80% which is the level it will exceed under the Obama Administration's future budget projections.  Europe is disintegrating from stalled economies with annual taxes to GDP levels around 50% and total debt to GDP rations in the 80-100% range.
But, fear not, for we have a great sage proffering "intelligent solutions."  Alan S. Blinder is his name and he believes:

Our country seems mired deeply in the silly season when it comes to the leading economic question of the day:  how to tame the federal budget deficit.  That's a shame, because fixing the long-run deficit is a difficult issue that requires serious thought and a modicum of political goodwill, both of which we are in short supply right now.

The first principle implemented by the Democratic Party after it won control of the Executive and Legislative Branches of the federal government in 2008 was to radically increase federal spending.  What are the chances of expecting a "modicum of political goodwill" from the Democratic Party in even fixing the long term deficit?  According to Alan Blinder:

If Congress wants a smaller national debt, it must either spend less or tax more.  Like King Canute (an obscure academic reference-please check Google), it cannot just command the tides.

Democrats may prefer more tax increases and fewer spending cuts, while Republicans prefer the reverse.  That's fine.  Differing budgetary priorities should be the stuff of political debate.  But neither party can just command the national debt to stop growing.

It seems as though President Obama was acting exactly like "King Canute" in commanding his fundamental transformation of American until the American people rebelled during the 2010 mid-term elections.  The political will clearly expressed in this election cycle is to cut spending rather than increase taxes to stop the growth of the deficit spending.  When the Democrats have both the Executive Branch and the Legislative Branch under their control, the Democrats commanded the debt to grow.  But, Alan Blinder sees big problems with spending cuts, which are the overwhelming desire of the American taxpayers/workers:

Some people see the debt ceiling as a way to force spending cuts that Congress would otherwise refuse to make.  Maybe.  But it's a clumsy and risky way that, among other things, could endanger the credit-worthiness of the United States government if our inability to float new debt made it impossible to raise needed cash.  And for what purpose?  To accomplish something that Congress has the power to do anyway?

The creditworthiness of the United States is not completely controlled by the Obama Administration.  It is threatened by foreign holders of our U.S. Treasury Securities.  And, whenever any one or more of the holders of our national debt (notably Japan, China, Russia and Arab Oil Exporters) decides that our debt is not worthy because of devaluation (either by inflation or too much debt), they could precipitate a crisis by just selling any significant amount of our debt.  This would drive our interest rates sky high and break the value of the dollar.  Where was Mr. Blinder in 1980-1981 when the yield on the 10-Year U.S. Treasury bond exceeded 15%?
Alan S. Blinder is disclosing a clear bias in favor of Keynesian economics by ignoring the radical spending of the Obama Administration, while implying the newly elected Republicans are being "silly" about their desire "to tame the federal budget deficit."  Keynesian economics postulates government spending as a way to stimulate an economy and to create jobs.  The Japanese have been increasing deficit spending dramatically since their 1990 economic bubble burst.  In spite of the fact that they now have a government debt to GDP of approximately 200%, the greatest of the developed economies, theirs is still struggling for sustained growth.
The taxpayers of America and the workers of America are pretty much the same people.  All workers pay payroll taxes, while lower income workers, for whom payroll taxes are highly regressive, may pay little or no income taxes.  And, passive income recipients may pay income taxes without paying payroll taxes.  Overall, though, the worker and the taxpayers are essentially the same people.  They do all the work that makes the economy go, and they pay all payroll and income taxes that make the government operate.  But, unfortunately, taxpayers/workers never get to choose the fiscal policies under which their taxes are spent.
Therefore, to correct this injustice, we propose to let the taxpayers/workers choose which fiscal policy they would have preferred:
(1) to have accepted the Obama Administration's Democratic Party agenda and continue it through fiscal year 2012; or
(2) to have had a $1.0 trillion across the board tax cut at the beginning of the Obama Administration which would have been effective for all four years of his first term.  Given that the 2008 federal government tax receipts were $2.9 trillion, a $1.0 trillion across the board tax cut would have been a 33% tax cut, including payroll taxes, for every taxpayer/worker.  And they would have known that it was guaranteed for four years, or they would have received an immediate increase in their take-home pay which would have been plowed back into the economy everywhere they were spending prior to the recession.
Please mark your ballot:
____ Obama's Radical Spending which will increase the total public debt to over $12.1 trillion by 2012,
or
____ Taxpayer/Worker a 33% tax cut in both income and payroll taxes guaranteed for 4 years.
The result of this economic policy election should end the tyranny of tenured academic theorists and ideologues who sit in their tenured thrones with no rebuttal for their pontifications, in this case, in support of Keynesian policies.
This vote on the Keynesian program of tax and spend, which has misled much of Europe, would finally bury Keynesian economics forever.  And, America's economy would be well on its way to a strong recovery.  And, if Congress stopped the deficit spending, the cumulative deficit would be reduced as a result of increased tax revenue from a growing economy.  And, thereafter, we will never have to read anything as silly as:
Back in the 1930's, an exasperated John Maynard Keynes quipped that, if the British government refused to spend money on anything sensible, it could at least bury cash around the country and invite people to dig it up.  If a ridiculous policy like that would create jobs-as it would have-then surely even lame-brained government spending will create jobs, too.
Fred N. Sauer is an American patriot, St. Louis resident, and businessman, who can be found at www.americasculturalstudies.com and whose blog can be found at http://www.fredsauermatrix.com.
|