Let us first look back to the bombing of Serbia by President Clinton and who was most instrumental in encouraging him.

According to Dean Murphy in the New York Times of October 2000,

"Hillary Clinton called for the US to reject isolationism and aggressively engage itself in world affairs in the tradition of President Truman at the end of WWII.
"She cited American involvement in Bosnia and Kosovo as examples of foreign engagements she favored on moral and strategic grounds, but also suggested that Americans needed to consider becoming involved in solving crises that are not only military in nature."

In other words Hillary urged Bill to launch the first "human rights war" in Bosnia and Kosovo. But in doing so she laid the foundation for an Islamic beachhead in territory previously fought over for centuries by Christian Serbs who were resisting Muslim invasion and conquest.
Again, according to Gail Sheehy writing on December 9, 1999 in Hillary's Choice, page 345: On March 21, 1999, Hillary expressed her views by phone to the President:

"I urged him to bomb. The Clintons argued the issue over the next few days. The President expressed what-ifs: What if bombing promoted more executions? What if it took apart the NATO alliance?
"Hillary responded, "You cannot let this go on at the end of a century that has seen the major holocaust of our time. What do we have NATO for if not to defend our way of life?"

The next day the President declared that force was necessary. Thus it was Hillary Clinton who urged her husband to bomb Serbia. And it was done, predominately, with the use of U.S. aircraft wearing NATO insignia and bombing from thousands of feet. Inevitably such indiscriminate force led to the destruction of bridges in Belgrade with untold numbers of Serbian civilians killed. Some humanitarian war!
The same thread appeared in June 1999 when Hillary spoke at the Sorbonne in Paris. She again defended the bombing of Serbia by claiming that:

"We will not turn away when human beings are cruelly expelled or when they are denied basic rights and dignities because of how they look or how they worship. When crimes against humanity rear their ugly heads, we have to send such a message as an international community."

She was referring to the Muslim victims of the war but she lost sight both of the Serbian victims who had died at the hands of Muslims she was defending or who themselves had been expelled from their lands by Muslim aggressors. She misread the strategic and humanitarian disaster to the West that increasingly jihadist Muslim states in the Balkans were bound to create. It was not America's finest hour.
Now Secretary of State, Hillary Clinton, is doing the very same in Libya that she set in motion in Bosnia and Kosovo. Like the pressure she brought to bear on President Clinton, Hillary has repeated it with President Obama. 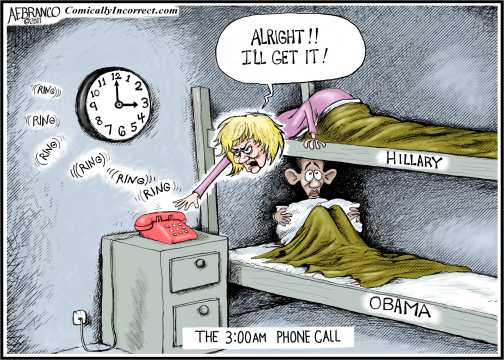 So we have Obama signing on to United States bombing in Libya in order to protect the so-called Libyan rebels against the deplorable President Gaddafi. But, like the Muslims in the Balkans that Hillary wept over, we have no true idea who these rebels really are. There are commentators who believe that, as Gaddafi himself suggested, the rebels are members of Al Qaida or the Muslim Brotherhood.
It is instructive to read Tom Dickinson writing in the far from conservative website, Rolling Stone, on March 21, 2011. Though Dickinson is critical of Obama, remember it was Hillary Clinton who pressured the present president, as did Samantha Power, one of his most influential foreign policy advisors, and Susan Rice, his ambassador to the United Nations. Dickinson wrote:

"In recent years, at mosques throughout eastern Libya, radical imams have been "urging worshippers to support jihad in Iraq and elsewhere, according to Wiki-Leaked cables. More troubling: The city of Derna, east of Benghazi, was a "wellspring" of suicide bombers that targeted U.S. troops in Iraq.
"By imposing a no-fly zone over Eastern Libya, the U.S. and its coalition partners have effectively embraced the breakaway republic of Cyrenaica. A West Point analysis of a cache of al Qaeda records discovered that nearly 20 percent of foreign fighters in Iraq were Libyans, and that on a per-capita basis Libya nearly doubled Saudi Arabia as the top source of foreign fighters.
"The epicenter of Libyan jihadism is the city of Derna - the hometown of more than half of Libya's foreign fighters. The city of 80,000 has a history of violent resistance to occupying powers - including Americans, who captured the city in the First Barbary War.
"A surprisingly readable cable titled "Die Hard in Derna" makes clear that the city "takes great pride" in having sent so many of its sons to kill American soldiers in Iraq, quoting one resident as saying: ‘It's jihad - it's our duty.'"

So here we see Hillary at it again. Having brutally harmed Serbia and forced it to lose its heartland of Kosovo -- what Serbs call their Jerusalem -- she aided and abetted Muslim jihadist ambitions and is now doing the same in Libya.
Let us also not forget that in Frankfurt, Germany, two U.S. servicemen were recently murdered by a Kosovo Muslim terrorist screaming Allahu Akbar (Allah is greater) as the unarmed soldiers sat in a bus at the airport.
Is Hillary so naïve as not to realize that these are not Libyan rebels in the true sense of the word? No, I believe she fully understands what she is doing and that makes for one truly frightening scenario.
The rebels are jihadists, murderers of Americans in Iraq and Afghanistan. They are enemies of the West; enemies of Jews and Christians and of all other non-Muslim faiths. What is shameful is that Americans are being put yet again in harm's way in another Muslim country and at the urgings of the Arab League: that ever corrupt body that is using American and European forces as cannon fodder.
The jihadists are now the creatures that Barack Hussein Obama, with the connivance and urgings of Hillary, Samantha Powers, Susan Rice and so many other "progressive" denizens of the White House and State, are supporting. If this were a novel it would be considered too far-fetched.
It will be interesting to see how the far left views Obama's and Hillary's War? Unhappy, to say the least, with the protracted conflict in Iraq, Afghanistan and now the Libyan imbroglio, one thing is certain: they cannot this time blame Bush.
Oh, what noxious weeds has Hillary Clinton sown!
Victor Sharpe is a freelance writer and author of Volume One & Two of Politicide: The attempted murder of the Jewish state.