Warning: mysqli_free_result() expects parameter 1 to be mysqli_result, bool given in /var/www/html/americanthinker/admin/common/functions/func.general.php on line 126
 Biden's Journalist-in-the-Closet Caper Is a Big Bleeping Deal - American Thinker
|

By Kyle-Anne Shiver
Vice President Joe Biden gave a speech last Wednesday in Florida.  The occasion was a $500-per-head fundraiser for Democrat Senator Bill Nelson.  The Orlando Sentinel was the press-pool-on-point to cover the event for the people of the United States of America.
The Sentinel sent one reporter.  Said reporter was immediately confined by a Biden advance-team member to a storage closet, given a bottle of water and kept inside by a Biden thug at the closet door.  Biden's prepared speech -- but nothing whatsoever else -- got "covered" for the people of the U.S.A.  And the intrepid press-pool-on-point "reporter" limped back to the Sentinel with his little tail between his legs, happy to have had a little water to drink and a cell phone to keep him company during his confinement.
Wimp is too mild a word.
Anyone care to opine on what James O'Keefe might have done in such a circumstance?  I would love to have seen that.  But I digress into wishful thinking.
Matt Drudge had a source and propelled the story.  (I say extra prayers every night for Matt Drudge.)  The too-cowardly-for-words-now MSM promptly yawned, cowered and went back to licking the backside of the Obama administration.
The "most transparent" administration in the history of the world locks a reporter in a closet to keep him from mingling with Party fat-cats at the mega-mansion of a mega-rich Democrat donor and this is not front-page, headline news?
Yes, Biden's journalist-in-the-closet caper is a big bleeping deal.
However, it does interfere with the most-transparent-administration-in-history narrative.
So sorry, America.  Go back to work, pay your taxes like good little sheep and don't try to pry underneath the covers of transparent thuggery. 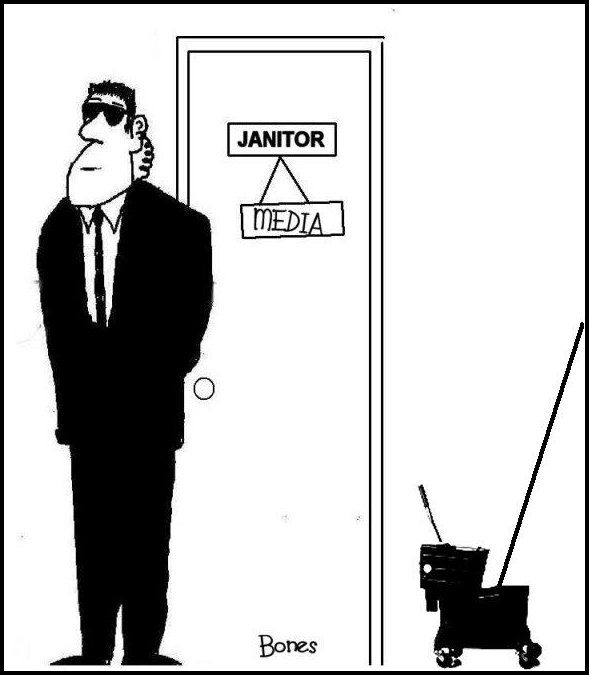 Your media -- whose job is supposed to be keeping you truly informed on all elected officials and government workers -- is still held in thrall of the Obama cult.   Your media elites have written you off.  They are intrepid reporters no more.
Your once-valiant, go-to-any-lengths-to-get-the-whole-story journalists are now the Puppy-Pack.
They follow their masters -- Barack and Joe -- wherever they allow them to go.
The Puppy-Pack huddle for treats -- tidbits of carefully-chosen "news" and micro-managed diets of behind-kissing "access."
The Puppy-Pack eagerly awaits their masters' call to bark-attack any intruder who threatens their masters' delight.  They'll surround a Sarah Palin or a Michelle Bachmann and yelp ‘til the cows come home just so they won't get shut out of the masters' hug-fest at sundown.  They'll scamper ‘round any unfounded rumor of Tea-Party incivility, while letting union death threats and bomb scares go completely unnoticed-- as long as the masters' hushpuppies keep flying their way.  The Puppy-Pack will snarl, yelp, whine and wallow in dirt as long as Barack and Joe keep whistling and calling their names.
When did this piteous reduction in the stature of our fourth estate begin?  Well, it began to great 60s-radical fanfare several decades ago.  Journalists-in-waiting eagerly imbibed the "America-is-really-horrible" kool-aid and were gulled into believing they would spearhead our revolution into socialist utopia.  They waited for the One they were waiting for, all the while dumbing-down their profession and convincing themselves they were really the "smart" Pavlovian pets.
But the disgusting decline of our fourth estate really hit gutter-level rock bottom during the 2008 presidential campaign.
Way back on the campaign trail, long before Barack became the One and Joe became the Two, our media elites were becoming the Puppy-Pack.
When Barack Obama attracted throngs of young people, the Puppy-Pack yelped his praises.  But they ignored the really big back story on how these massive "political" rallies were preceded by free rock concerts and free food and beverages.  Only happy barks allowed for the new master.
When Barack Obama brought his postage-stamp sized resume to the national stage, MSNBC Puppy-in-chief, Chris Matthews got all "wee-weed up" and felt a "thrill" go up his leg.  Puppy Matthews barked this "news" to Gnarling-Puppy pal, Keith Olbermann, with customary spittle flying and our press's lurch at gutter-land was nearly complete.
But then, something scary drew the Pavlovian pets' attention and one of them nearly broke through the conditioning spell.  Andrea Mitchell was sent by MSNBC to cover candidate Obama's overseas celebrity tour for the American people and she tried to make a break for reality-regained territory.
While her ever-enthralled puppy pals were chomping for treats, Andrea took notice of the One's "message management."  With a momentary romp into reality, Ms. Mitchell showed the tenacity of a bulldog, pointing out - while on air - that candidate Obama was staging "fake" news with "carefully managed" video-ops, no press conferences and no real journalists allowed to ask a single question.  Ms. Mitchell even went so far as to say she had never seen a presidential candidate do this kind of thing before.
Andrea was barking her little head off to save her profession - and us, but the Puppy-Pack reined her in and now tenacious Andrea is just one of the pack.
Alas, the pack instinct is nearly impossible to break.
So, by the time Obama and Biden were sworn in, the once-valiant, once-intelligent, once-fully-human American media had been completely reduced to the Puppy-Pack that now begs for access and cowers in closets.
The Puppy-Pack lines up for "press" reports every day, where they are treated to the master's latest lap-dog's hush-puppy avoidance tactics.  Still, the Puppy-Pack stays in line and doesn't even complain when they never get to actually ask the master any questions.  Press conferences are far too unwieldy for the new master to handle, so the Puppy-Pack just goes with the flow.
And as every sentient American knows by now, the only people who watch or listen to Barack and Joe's Puppy-Pack are the sheeple.
Like a herd, the sheeple follow the Puppy-Pack down the yellow brick road where civilizations go to die.
The rest of us must shut the whole MSM Puppy-Pack and their sheeple in a closet.   And go about the business of saving the country, oblivious to their senseless, piteous barking.  Otherwise, this useless pack of puppies and their incompetent masters are going to drive us all over the cliff with nary even a prayer to spare us.
|