Warning: mysqli_free_result() expects parameter 1 to be mysqli_result, bool given in /var/www/html/americanthinker/admin/common/functions/func.general.php on line 126
 The Nazi Origins of Apocalyptic Global Warming Theory - American Thinker
|

By Mark Musser
One of the primary pioneering theorists on apocalyptic global warming is Guenther Schwab (1902-2006), an Austrian Nazi.[i]  In 1958, Schwab wrote a fictional novel built off of Goethe's (1749-1832) Faustian religious play entitled "Dance with the Devil."  While a few scientists since the late 1800's had contemplated the possibility of minor global warming coming from industrial pollution, Schwab used Goethe's dramatic approach to convert the theory into an apocalyptic crisis.  The book outlines many looming environmental emergencies, including anthropogenic global warming.  Guenther Schwab's very popular novel was an apocalyptic game changer.  By the early 1970's, it had been translated into several languages and had sold over a million copies.
At one point in his novel, Schwab opines on the fragile relationship between oxygen and carbon dioxide in the atmosphere.   Assuming the planet has only about 100 years remaining, Schwab frets over the continuing rise of carbon dioxide that "will absorb and hold fast the warmth given out by the earth.  This will cause the climate to become milder and the Polar ice will begin to thaw.  As a result, there will be a rise in the level of the ocean and whole continents will be flooded."
Schwab had been a strong nature lover since boyhood, and by the 1920's he became very active in the emerging environmental movement in Austria.  Later, he joined the Nazi Party.  While this may sound odd to many who have bought into the Marxian propaganda over the years that the Nazis were right wing capitalistic extremists, greens who signed up for the Nazi Party were actually very typical of the day.  The most widely 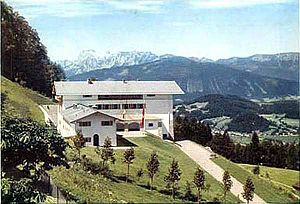 represented group of people in the Nazi Party was the greens, and Guenther Schwab was just one of among many.  The greens' interest in lonely places found a solitary niche in the singleness of Adolf Hitler, who ruled the Third Reich from his spectacular mountain compound, high in the Bavarian Alps called the Berghof.  In English, this could easily be translated as Mountain Home, Bavaria.
After the war in the 1950's, Guenther Schwab's brand of environmentalism also played a fundamental role in the development of the green anti-nuclear movement in West Germany.  The dropping of the atom bomb and the nuclear fallout of the Cold War helped to globalize the greens into an apocalyptic 'peace' movement with Guenther Schwab being one of its original spokesmen.  The unprecedented destruction in Germany brought on by industrialized warfare never before seen in the history of the world only served to radicalize the German greens into an apocalyptic movement.   Their hatred toward global capitalism became even more vitriolic precisely because the capitalists were now in charge of a dangerous nuclear arsenal that threatened the entire planet.
Later, Guenther Schwab joined the advisory panel of "The Society of Biological Anthropology, Eugenics and Behavior Research."  Schwab was especially concerned with the burgeoning population explosion of the Third World that he was sure would eventually overrun Europe.  By advocating modern racial science based on genetics, Schwab believed that the population bomb, together with its associated environmental degradation, could be averted.  Here, Schwab shows his basic commitment to the Nazi SS doctrine of 'blood and soil' -- an explosive concoction of eugenics and environmentalism loaded with eco-imperialistic ambitions that had devastating consequences on the Eastern Front in World War II.
The success of Schwab's book helped him to establish an international environmental organization called "The World League for the Defense of Life."  Not surprisingly, Werner Haverbeck, former Hitler Youth member and Nazi environmental leader of the Reich's League for Folk National Character and Landscape, later became the chairman of Schwab's organization.  In 1973, Haverbeck blamed the environmental crisis in Germany on American capitalism.  It was an unnatural colonial import that had infected Germany like a deadly foreign body.
Both Schwab's organization and Haverbeck were also instrumental in establishing the German Green Party in 1980.  Such embarrassing facts were later managed with a little housecleaning and lots of cosmetics, which was further buoyed by characterizing such greens as extreme 'right wing' ecologists -- a counterintuitive label that continues to misdirect and plague all environmental studies of the Third Reich.  Worst of all is that Haverbeck's wife is also a Holocaust denier.
Long before Al Gore's "Inconvenient Truth," green Nazi Guenther Schwab played a large role in catalyzing the frightening theory of global warming.  With no small thanks to Schwab, the Great Tribulation of Global Warming was ushered into the modern consciousness behind the collapse of the Millennial 1,000 year Third Reich.  There is therefore a swastika in the German woods that needs to be closely watched here.
Mark Musser is the author of "Nazi Oaks: The Green Sacrificial Offering of the Judeo-Christian Worldview in the Holocaust" and a commentary on the warning passages in the book of Hebrews called "Wrath or Rest: Saints in the Hands of an Angry God."
[i] Gert Gröning, Joachim Wolschke-Bulmahn, Stiftung Naturschutzgeschichte, Naturschutz und Demokratie!?: Dokumentation der Beiträge zur Veranstaltung der Stiftung Naturschutzgeschichte und des Zentrums für Gartenkunst und Landschaftsarchitektur (CGL) der Leibniz Universität Hannover in Kooperation mit dem Institut für Geschichte und Theorie der Gestaltung (GTG) der Universität der Künste Berlin, Martin Meidenbauer Verlag, 2006, p. 113.
|