Warning: mysqli_free_result() expects parameter 1 to be mysqli_result, bool given in /var/www/html/americanthinker/admin/common/functions/func.general.php on line 126
 Sarah and the San Francisco Poster Wars - American Thinker
|

By Ray Gross
As I stood in front of the vile posters of Sarah Palin, I felt anger and rage.  Above all, I felt powerless.
In the days after the Arizona shootings someone had plastered these horrible images on a fence surrounding an empty lot.  My gut reaction was to destroy them.  Why?  I began to question my urge to act in such a primal manner. It felt uncomfortable, and yet the urge was strong.  Who had taught me to react like this?  This was not the kind of person I wanted to be.
The more I thought about these conflicting emotions, the more it became clear to me.  If this had been a poster of George Bush five years ago, I would have been excited and stimulated by it.  What had changed?  What had changed me?

I am gay.  I live in San Francisco.  For the last few years I've had a terrible secret, one I felt necessary to hide from hateful and intolerant people.  Who would these people be, and what am I hiding?
I am hiding from the Liberal Left.  I am hiding that I'm a conservative.
Gay people are used to feeling the fear of backlash and intolerance.  It's been a common theme for me, and I hid being gay for a good part of my life because of that fear.
But here I am, hiding again, hiding from those who have been telling me my whole life that they are the tolerant, loving and accepting ones.  And I believed them, joining them in pinning the labels of hate and intolerance on the political right.
Now I fear them.  They are not tolerant or accepting.  They accuse others of hate and intolerance and yet, by their behavior they show themselves again and again to be the hypocrites they are.  They are incapable of seeing the irony of the situation; that those who preach "tolerance" are intolerant, and those who champion "love" exude hate.
Like Pavlov's dog they are trained by the left and the liberal media to salivate at the mere mention of the words "conservative" "Republican," "right,"  "Christian," and "Bush".  Now, they have a new favorite victim for their hate and intolerance, Sarah Palin.
I know the truth about Sarah Palin.
During the 2008 primary the Liberal Left and the Democrats exposed who they really are.  What was done to Hillary Clinton by the Democratic Party and the complicit media shook me out of my old belief system.   I broke free from the self-limiting anger and hate created by the left and the media towards the right.
For years I accepted the leftist line.  Things I never cared about trying to make sense of, or tried to form my own real opinions about, suddenly became important to me.
It was like I had been in an abusive relationship where I had been lied to and pushed around for so long that I didn't know what the truth was anymore.  I began to think for myself and ask questions I never thought to ask before.  Instead of taking the word of my abusers, I went in search of my own answers, and through my research realized that the things I thought were true were not.  It didn't take me long to discover that there were many of us out there who underwent the same awakening and personal and emotional transformation.
Now I am being courted by another potentially abusive lover. The Republican Party.
I am a little relationship shy right now and am enjoying being an Independent voter and thinker. I love my freedom.  I love the freedom to think for myself. And when I believe in something it is because I've done my own research to support or deny the "facts" I'm given.   I will no longer be fooled.  A "news" personality/anchor or corrupt politician can no longer tell me how to think or feel. And now, when I hear the left repeating the same old lies and using the same tactics of hate and personal destruction, I am determined to break the chains of intolerance and lies that keep so many on the left captive to a destructive belief system.
With my new awareness of myself and the world around me, I decided to keep my eyes open for someone I can trust, someone who represents truth, honesty, goodness, and above all, strength of character.
Enter Sarah Palin. The moment I heard her speak, I knew she was special. There was an unmistakable honesty and strength about her. All hell broke loose on the left when she entered the scene. The ferociousness and vileness of the attacks towards her comforted me because I know how the left operates.  She was telling the truth, and in doing so was exposing the underlying falsehoods of their belief system.  This is when the left always lashes out, it is their gut reaction to their fear of being exposed, and anger and hate speech are their weapons.
If you look at the response and reaction to Sarah Palin from the left, you will realize that this isn't just about political views.  Their intense, over-the-top reaction to everything she says and does is because they know she holds the truth that threatens to destabilize their world.
Enter Kevin DuJan, founder of Hillbuzz.org.  Kevin's situation is very similar to mine.  He is a gay conservative man living in a predominately gay neighborhood referred to as "Boystown" in Chicago. Along with Sarah Palin, Kevin is my main source of inspiration and courage. Every day of his life he fights and challenges the Liberal Goliath by highlighting the intolerance and lies perpetrated by the left. He inspired me to take my turn, to step up and be, as Sarah Palin put it, a "patriotic David". 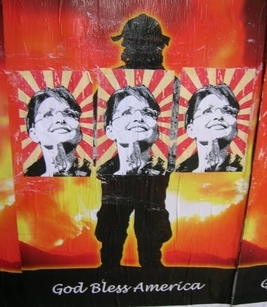 With the graphic talents of a fellow Hillbuzzer, Susan, I was going to fight back.  I was going to take back my power. And I was going to do it in a creative and positive way.
At the crack of dawn I went to that fence, and pasted over the vile and angry posters of Governor Palin with another poster.  A poster of Sarah, with hands clasped in front of her looking up in prayerful thanks,  her smile genuine, her eyes sparkling.  Behind her is the same sunburst design found on a well known Harvey Milk poster from the seventies.  I wanted to neutralize the left, not only by highlighting their own anger in a peaceful way, but by using their own liberal symbols to showcase Sarah Palin in a positive light.
But, most of all, I wanted to honor Governor Palin in a way that would make her proud.
Standing in front of these new posters I felt hope and power. I felt proud, not only of the beautiful message of Sarah's image, but I felt proud of myself. Proud of how far I had come from the days of my old cocoon of ignorance and intolerance to my present place of self awareness. It was a feeling and a story I wanted to share with others.
There will be a time very soon when we will all be called on to be patriotic Davids - called to fight the Goliath left.  We have choices on how we are going to respond to anger and vicious lies. We can be lured  to respond to their negativity with negativity. Or we can respond in a positive and creative way.  I chose to not  allow myself to be baited into responding with anger and negativity.  After all, I have the best role model in the world about how to respond to the left - with poise and grace and courage.  It drives them crazy because it highlights their anger and hypocrisy.
Thank you, Sarah Palin for your example.  You show us how to do it every day.
|