Warning: mysqli_free_result() expects parameter 1 to be mysqli_result, bool given in /var/www/html/americanthinker/admin/common/functions/func.general.php on line 126
 Radical Islam or Mainstream Islam? - American Thinker
|

By Dave Gaubatz
Radical Islam.  What does this mean?  Does it mean that there are a few Muslims who take Islam to the extreme and cause violence throughout the world?  In order for innocent people and countries to combat the threat of violent Islamic jihad, we have to redefine "radical Islam."  If the majority of Muslims adhere to sharia law (at least in their hearts), then we must confront the possibility that "radical Islam" is actually mainstream Islam.
Sharia law is an all-or-nothing concept.  A true Muslim can't take certain parts of sharia and adhere to certain aspects but not others.  Physical jihad is a part of sharia law, and even when Muslims can't fight in the name of Islam, they must support the mujahadeen (fighters) financially, or at the very least in their hearts.
Many readers will criticize me for saying that 80-plus percent of Muslims desire sharia in all aspects.  I can only say this because I have been going to Saudi Arabia and the Middle East since 1979, and the majority of Muslims do desire sharia law to be implemented in all parts of the world.  Muslims in the Middle East desire sharia law and an Islamic ummah (nation) worldwide, and unfortunately for Americans, this means America as well.
While assigned to Iraq in 2003, I had the opportunity to interrogate numerous enemies of prisoners of war (EPW).  I have to admit that I was a bit selfish, but I wanted to know what were going to be the next attacks in America.  Over and over we were told the next attacks were going to attack the "hearts" of Americans.  I was persistent and wanted to know exactly what this meant.  We were told that the "hearts" of Americans were their children.
If Americans believe that al-Qaeda and their cognates such as CAIR, ISNA, the MSA, MANA, and a host of others will not attack our children, they are living with a false sense of security.  I blame this false sense of security on our U.S. president and his administration.  I also blame our FBI for attempting to make Americans feel safe when in actuality they are not.  America could suffer another 9/11-style physical attack much worse than we had on this day.  The cards are in the hands of Islamic terrorists.  They have the capability to carry out such attacks any day they desire.  They have the support, money, knowledge, and most importantly, the desire to carry out these attacks.
What is most frightening is that my researchers and I have conducted research at over 250 Islamic centers in America.  The vast majority desire to destroy America -- and our House, Senate, president, and senior law enforcement officials give them the opportunity.
The most important question people have is this: how do we stop the pending attacks?  The answer is quite simple.  Islam is not a religion.  Islam (according to Islamic scholars) is a military, economic, and political ideology that uses "religion" to carry out the ultimate goal of world domination (again according to their leading scholars of Islam both in the U.S. and in the Middle East).
The following are materials obtained at Islamic centers in the U.S., and this is what the Muslim children are being taught.

1. "The objective of Islamic Jihad is to put an end to the dominance of the un-Islamic systems of government and replace them with Islamic rule, Islam intends to bring about this revolution not in one country or in a few countries but in the entire world. Although initially it is the duty of every member of the Muslim party to work for revolution wherever he lives the final purpose is nothing but a world revolution. Any revolutionary ideology which upholds the good of all mankind, and is not of a mere national unit, cannot limit its horizons to those of any single country or nation."

Book: Come let us change this World, pages 106-107.  Author: Sayyid Abul A'la Mawdudi, founder of Jamaat-e-Islami (The Islamic Party), a political party in Pakistan.
2. "If you accept the whole of Islam in your life ... a time will come when Communism will fear for its survival in Moscow, Capitalistic democracy will tremble for its safety in Washington and New York."

Book: Ibid., page 83.
3. "Islam requires the earth -- not just a portion, but the whole planet."
Book: Jihad in Islam, page 10.  Author: Syed Abul A'la Maududi.
4. "Every Muslim should have the desire for martyrdom in his heart. If he is unable to go into the battlefield, he should certainly have the desire for martyrdom in his heart."
Pamphlet: "40 Hadith on Jihad," page 7.  Author: Maulana Abdus Samad Siyal.  Published in Pakistan.
5. "It is learnt from this Hadith that physical jihad will continue right till the day of resurrection and will be waged as such in some part or the other of the world". We do not deny the benefit of waging an academic and intellectual war. However, an intellectual war alone cannot be fought everywhere. There are special places and occasions for it. In short, despite waging a jihad with the tongue, pen, rationale and intellect, the Muslim community cannot be absolved of the duty of waging physical jihad."
Pamphlet: Ibid., pages 21-22.
6. "A martyr will go directly to heaven."
Pamphlet: Ibid., page 59.

7. "The only reward of those who make war upon Allah and His messenger and strive after corruption in the land, will be that they will be killed."
Booklet: "Duties of the learned to Ignorant Muslims," page 5.  Author: Abdul Qadir Oudah (Muslim Brotherhood/Egypt).  Published in Pakistan.
8. "Whatever is against Sharia, is unlawful for Muslims, irrespective of any Government which has declared it lawful or has ordered it to be acted upon because the right of legislation for any Government is restricted to the condition that the law framed by it should be in accordance with the Sharia, its fundamentals and legal spirit. Now, if any Government considers it lawful to exceed these prescribed limits, then because of this attitude of the Government, unlawful shall not become of this attitude of the Government, unlawful shall not become lawful and it would not be lawful for any Muslim to act upon or enforce laws against the Sharia. Rather in such a situation it becomes obligatory for every Muslim to refuse to accept those laws and abstain from acting upon them, for it is unconditional for the Muslims to obey the orders of men in power."
Booklet: Ibid., page 34.
9. "Justice demands that tyranny and oppression should not be allowed to work havoc in the world." The Holy Qur'an clearly beings out the fact that Qital (physical Jihad/Fighting) is not an end in itself in Islam, but a means to a higher and nobler end - the welfare of humanity". "The person who raises arms in order to curb tyranny and oppression and to eradicate evil are the blessed souls who fight in the way of Allah."
Pamphlet: Jihad in Islam, page 15.  Author: Abdul Hameed Siddiqi (Jemmah Islamiyah).  Published in Pakistan.
10. "The Islamic State is that it is an ideological state." The Qur'an and the Sunnah would be the chief sources of of the public law of the land."
Pamphlet: "Political Theory of Islam," pages 31 & 33.  Author: S. Abul A'la Maududi (Founder of JI terrorist organization).
11. "The Front is Everywhere. You have been well aware now of the categorical injunction of the Islamic Shari'ah that whenever an enemy attacks any part of Darul Islam, Jihad for its defense becomes obligatory (Fard) on every Muslim." "Jihad is obligatory on all the Muslims does not necessarily mean that all of us should take to arms and proceed to the battle-front. Jihad is a very wide term and its connotation is not confined to just the clash of arms only. In fact it denotes the entire war-effort which is made to uphold our cause and win victory over the enemy. Out of the many and varied fronts of war, battlefield is just one of them. Warfare requires total effort and all sections of people-nay, each and every citizen in the rear-must contribute his share, however humble, to strengthen the capability of those fighting on the front line. This duty of doing our best, dedicated to enhance the fighting ability of our soldiers, is too a Jihad. Indeed, every bit of work done, the minutest service rendered, is Jihad. The gallantry and dedication of the armed personnel no doubt is the key to success but next in importance for the successful prosecution of war is the procurement of money, means, and material. Besides, the qur'an warns us that if a person fails to contribute financially, he in face invites his own doom."
Pamphlet: "Call to Jihad," pages 9-10.  Author: Syed Abul A'la Maududi.
12. "Islam wishes to destroy all States and Governments anywhere on the face of the earth which are opposed to the ideology and programme of Islam regardless of the country or the Nation which rules it. Islam requires the earth-not just a portion, but the whole planet. Towards this end, Islam wishes to press into service all forces which can bring about a revolution and a composite term for the use of all these forces is 'Jihad.'"
Pamphlet: "Jihad in Islam," pages 9-10.  Author: Syed Abul A'al Maududi.

13. "Slay the disbelievers whenever you find them. The disbelievers should be killed in whatever month or time they are found."
Book: Ma'ariful Qur'an, Vol. 1, page 534.
14. "Islam is a revolutionary ideology and program which seeks to alter the social order of the whole world and rebuild it in conformity with its own tenants and ideals"
Pamphlet: "Jihad in Islam," page 8.  Author: Syed Abul A'la Maududi.
15. "Islam wishes to destroy all States and Governments anywhere on the face of the earth which are opposed to the ideology and programme of Islam regardless of the country or the Nation which rules it."
Pamphlet: Ibid., page 9.
16. "Islam requires the earth -- not just a portion, but the whole planet."
Pamphlet: Ibid., page 10.
17. "The objective of the Islamic ‘Jihad' is to eliminate the rule of an un-
Islamic system and establish in its stead an Islamic system of state rule.
Islam does not intend to confine this revolution to a single State or a few
Countries; the aim of Islam is to bring about a universal revolution."
Pamphlet: Ibid., page 24. 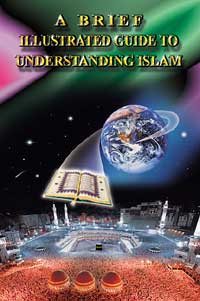 Ali Al Timimi (editor):
Convicted in 2005 and serving life plus seventy years for advocating terrorism against America.  Timimi is supported by CAIR, was their "man of the year," and is often invited by our congressional leaders to give the opening prayer.
This book is distributed by Saudi Arabia as da'wah material.  Public libraries throughout America have this book donated for our children to better understand Islam.