By Peter Wilson
As part of the "Healthy, Hunger-free Kids Act of 2010" the White House released a "Before/After Elementary School Lunch Menu," with five typical "Before" (unhealthy) and five "After" (healthy) menus.
The Before menus have five stereotypical fast food entrées: burritos, hot dogs, pizza, pizza sticks and hamburgers (bad), but they also include a fair amount of healthy food: bananas, raisins, raw celery and carrots (1/8th cup each), applesauce, canned pineapple, etc.
The After menus are notable in their length: rather than three items plus milk, they typically have four items, plus milk and dips for the raw vegetables. One of the mission statements of the Healthy, Hunger-Free Kids Act of 2010 seems to be that no crudité shall be consumed without low-fat ranch dip. Michelle must be a fan.
The protein servings in the After menus have been reduced to the minimum recommendation; the Before menus had 3 or 4 ounces of meat, while the After menus restrict the meat and fish servings to 1.5 to 2 ounces. (I wonder how many ribs that would be?)  Combined with the milk serving, this provides around 20 grams of protein out of a daily recommendation of 28 grams, so it might be sufficient, assuming that dinner isn't a Ring Ding and a bag of Cheetos cheese flavored snacks. Still, one wonders why the "Hunger-free" act is cutting meat servings in half for elementary school students building strong minds and bodies.
Here's the week's line-up, with my comments:
Monday: 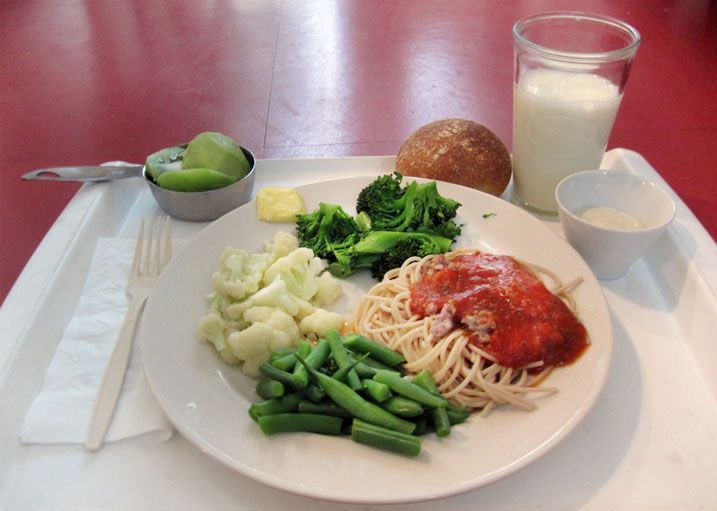 The Healthy, Hunger-free Kids Act targets both obesity and hunger, which seems like a contradiction, since obese people do not have a hunger problem. Michelle Obama would argue that poor people can't afford healthy food; since they live in food deserts, they are forced to eat junk food, which makes them obese but does not satisfy their hunger for healthy food. It's true that people with a limited food budget are more likely to splurge on fat and sugar than on carrots and low-fat ranch dressing, but this does not make them hungry. The growing sixth grader who eats his 1.5 ounces of turkey and throws his cup and a half of broccoli, cauliflower and green beans in the compost will probably not be hunger-free. A Devil Dog at the convenience store on the way home will easily remedy that problem.
|