Warning: mysqli_free_result() expects parameter 1 to be mysqli_result, bool given in /var/www/html/americanthinker/admin/common/functions/func.general.php on line 126
 Jobs and Revolution - American Thinker
|

Since I know nothing about Egypt beyond what I read in the papers, I won't comment on the Egyptian revolution.  All I can say is that I agree with the pundits.  When you have an autocratic regime then you get rigidities in the economy and society that strain and stress it until something breaks.  The only thing these thug dictators understand is spoils for their supporters and thuggery for the rest.  Freedom? Schmeedom.

So instead of solving Egypt's problems let's talk about America's jobs problem.  No doubt you've heard the mainstream media anguish about the mixed job numbers released on Friday.  Here they are in chart form, direct from the Bureau of Labor Statistics' Household Survey website.  First of all, let's look at the employment situation. 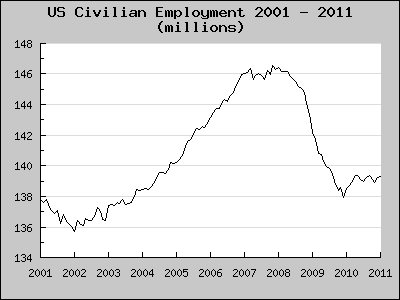 Not good.  If there ever was a jobless recovery, of the kind that Nancy Pelosi used to rage about back in 2003, this is it.  Eight million jobs lost since the peak in 2006, and no net jobs for the last year, in spite of a trillion or so in "stimulus."  But the really shocking numbers are in the labor force, the total of people actually working or actively looking for work. 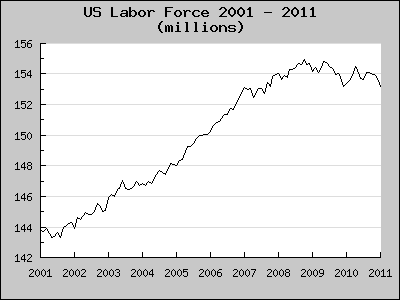 The labor force has been flat for three years.  Notice that even in Nancy Pelosi's nightmare years, the Bush jobless recovery in 2002-2003, the labor force was increasing smartly as people entered the labor force looking for work.  Not now, not with the mixed economic news of the Obama jobless recovery.
Of course, the sluggishness in the labor market is hardly surprising.  The Obama administration and its willing accomplices in the Congress just spent two years rewarding their supporters with new economic rigidities like ObamaCare, stimulus spending for government workers, new environmental penalties like the EPA effort to regulate carbon dioxide, slowdowns and outright bans on energy production, meddling in the housing market, and billions in subsidies to its supporters in the crony capitalist green energy business.  It seems that the only thing our politicians know is to reward their supporters and send their thugs out to beat the economy into submission.
Pretty soon the voters will be ready to throw the bums out and vote for hope and change.  After all, there are millions of jobless out there, and sooner or later they are going to get desperate.  But let me make it clear.  The situation in the US is nothing like the situation in Egypt.  For instance, we don't have millions of people in the streets.
We do?  You are saying that the American people the Tea Party movement have been in the streets peacefully protesting ever since the winter of 2009?  Well, I suppose you have a point.  And based on his State of the Union speech, the President still thinks that the answer to our problems is more government, a program described by the divine Sarah as "a bullet train to bankruptcy."
Anyway, violence never solved anything.  War is not the answer. That is what those nice silver-haired liberal ladies tell us from the bumpers of their Toyota Priuses.
Excuse me, lady.  What do you think that the individual mandate is all about?  It says: go get health insurance or else.  What do you think that universal compulsory education is all about?  It says: send your kid to school or government may take her away.  What do you think that taxation is all about?  Pay your taxes or go to jail.  So you see that it's not just thug dictators that believe in force and violence; nice educated liberal ladies of a certain age believe in force too.
We conservatives are different.  We believe in dialing down the level of force in society, starting with government force.  We believe that the way to get America back to work is not with crony capitalist green energy and bullet trains to bankruptcy.  We believe it starts with lower tax rates and lower government spending.  We believe, with Deirdre McCloskey, in the great middle class, a bourgeoisie dignified and free: free to innovate and free to experiment.
In that city on a hill, where you and I have a rendezvous with destiny, there is a slow, steady evolution every day as new ideas in the economy drive out old ideas, as a few people every day lose their jobs and a few people find new jobs, so there is never a need to take to the streets.  In the culmination of this incandescent vision, the last best hope of mankind on earth, government is limited and greedy bankers don't take home the big bucks.
It's not asking much.  Limited government, a middle class that's innovative and free, jobs, jobs, jobs, and everyone trying to make the world immediately around them a better place for them and their children.  Call it American exceptionalism, the middle class alternative to bloody revolution in the streets of Cairo.
Christopher Chantrill is a frequent contributor to American Thinker. See his usgovernmentspending.com and also usgovernmentdebt.us.  At americanmanifesto.org he is blogging and writing An American Manifesto: Life After Liberalism.
|