February 1, 2011: I can't help imagining Al Sharpton, Jesse Jackson, the NAACP, the Congressional Black Caucus, and all of the other race-profiteering usual suspects joyously awakening with a song in their hearts.  "It's The Most Wonderful Month of the Year."

Ah, yes, another Black History Month!  Time to pitch as many new guilt-trip government entitlement programs as possible.  "I mean, after all, we blacks are still victims of America's racist attitudes and systematic abuse, which has changed very little since the '50s. White America still owes us, damn it!"
See, I know how to sound like a good little colored boy who knows his place on the Liberal Plantation.  Democrat Massa's chief overseer Sharpton would be proud of me.
As a proud American who happens to be black, what I find most annoying about Black History Month, besides the concept of only one month to celebrate blacks' contributions to America, is the race-profiteers' despicable divisive exploitation of the month.
Throughout American history, white folks, and mostly Christians (there's that dirty C-word which the left despises) suffered, sacrificed, and died to help set blacks free and move them forward.
And yet, Sharpton and company use Black History Month to promote the image that every black achievement was made "in spite of" white America.
This month will be flooded with documentaries, specials, articles, and commentaries about how America still sucks for blacks and has a long, long way to go to make things right. 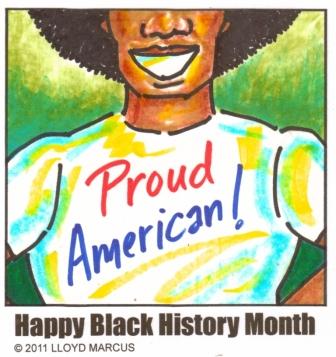 Just once, I would love to see Black History Month focused on celebrating the tremendous contributions by blacks in all areas of American life.  Include a few "shout-outs" to the decent, God-fearing, righteous white folks who helped.  That would aid in bringing our nation together, as opposed to the month being used divisively for political exploitation and extortion.
Black History Month should be a fair and balanced presentation of the history of Americans of African descent.  Notice that I said "Americans" rather than "African-Americans."
Our liberal anti-American public school system, the liberal media, and black race-profiteering so-called leaders make no effort to encourage black youths to be proud Americans.  They even discourage it.  Their efforts are focused on creating proud "Africans" who happen to live in America.
The fact that the highest office in the land is occupied by a black man confirms that the good in America's history outweighs the bad.  And yet, Sharpton and company would love to broadcast footage of the KKK lynching blacks 24/7 for the entire month of February.  By the way, the KKK was founded by Sharpton's homeys, the Democrats.
Meanwhile, much of white America's efforts to do the right thing are ignored.  For example, how many black youths are aware that ending slavery was a major issue of the Civil War?  On the side desiring to end slavery, 360,000 soldiers, most of them white, died.
How many black youths know that the Republican Party ended and abolished slavery in the United States and have championed Civil Rights more than any other political party?
I think about the whites who, by candlelight, taught blacks to read despite it being illegal at that time.  They risked being arrested because they knew it was the right thing to do.  And how about the whites who marched alongside Dr. Martin Luther King?  What are they, chopped liver?  Sharpton and company act as if these great Americans never existed.
What is Black History Month in the minds of most American youths?  Is it a celebration of black achievement?  I think not.  It is a month in which black kids are taught that they are victims and white kids are taught they are guilty.
For reasons only a psychiatrist can understand, liberals are obsessed with focusing on the evils of American history.  There is evil and wrongdoing in the history of every nation/people on the planet.  But America's history is overflowing with goodness and a sense of fair play.
Why?  Because regardless of what the left says, we were founded on Godly principles.  In the long run, we always strive to do the right thing.  We celebrate courage, righteousness, and personal achievement.  Peerlessly generous, Americans are swift to aid people in need regardless of where they live in the world.  We rally around the underdog and cheer for the good guy.
Americans are good, great people.  I have met many of them while traveling nationally on the Tea Party Express.  This is why it so offends me seeing them slandered and abused by the liberal media in support of black democrat race-profiteers.
So folks, please ignore all of the left's guilt trips and focus on the tremendous contributions by blacks to mankind and our great nation.  Happy Black History Month.
Lloyd Marcus, Proud Unhyphenated American
LloydMarcus.com
Spokesperson & Entertainer of Tea Party Movement & Tea Party Express.
The American Tea  Party Anthem CD/album.
Confessions of a Black Conservative, written by Lloyd Marcus, foreword by Michelle Malkin.
President, NAACPC (National Association for the Advancement of Conservative People of ALL Colors).
Join Lloyd Marcus Facebook Page.
Tea Are The World, "Taking Back America" The Making of Documentary -- The MUST-SEE Tea Party Historic Conservative Music Event!
|