Why We Should Fear the Moslem Brother

By Karin McQuillan
As we follow the unfolding story in Egypt, we are torn between hope and fear -- hope that democracy will gain a toehold and fear that the fundamentalist Moslem Brothers could take control of Egypt.  Perhaps you have heard the Moslem Brothers are the oldest and largest radical Islamic group, the grandfather of Hezbollah, Hamas, and al-Qaeda.
What you haven't been told is this: the Moslem Brothers were a small, unpopular group of anti-modern fanatics unable to attract members, until they were adopted by Adolf Hitler and the Third Reich beginning in the 1930s.  Under the tutelage of the Third Reich, the Brothers started the modern jihadi movement, complete with a genocidal program against Jews.  In the words of Matthias Kuntzel, "[t]he significance of the Brotherhood to Islamism is comparable to that of the Bolshevik Party to communism: It was and remains to this day the ideological reference point and organizational core for all later Islamist groups, including al-Qaeda and Hamas."
What is equally ominous for Jews and Israel is that despite Mubarak's pragmatic coexistence with Israel for the last thirty years, every Egyptian leader from Nasser through Sadat to Mubarak has enshrined Nazi Jew-hatred in mainstream Egyptian culture out of both conviction and political calculation.  Nasser, trained by Nazis as a youth, spread the genocidal conspiracy theories of the Protocols of the Elders of Zion, making it a bestseller throughout the Arab world.  On the Ramadan following 9/11, Mubarak presided over a thirty-week-long TV series dramatizing Elders and its genocidal message.
It is impossible to assess the danger posed by a takeover of Egypt today by the Moslem Brothers without knowing that Nazism launched the Brothers and is still at their core.  This response to modernity and to Jews was not predetermined by Egyptian history or culture.  It was Germany under Hitler that changed the course of history for Egypt and the Middle East.
How do we know all this?  We know it because the Third Reich was a meticulous keeper 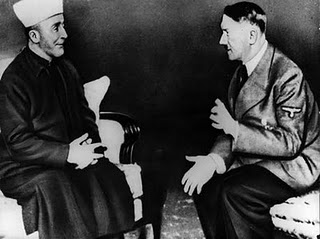 of records.  We have the memos, the planning documents, the budgets, even photos and films of the Reich's spectacularly successful campaign, implemented by the Moslem Brothers, to turn the Middle East into a hotbed of virulent Jew-hatred.  We have the minutes, the photo, and the memo of understanding, when Hitler and the head of the Moslem Brothers in Palestine, the Mufti of Jerusalem, shook hands on a plan for a Final Solution in the Middle East.
We have the records of this meeting, in which Hitler and the head of the Moslem Brothers in Palestine shook hands on a Final Solution for the Middle East -- years before the creation of Israel.
The Moslem Brothers helped Hitler succeed in genocide by slamming shut the door to safety in Palestine.  This was a key part of the success of the Final Solution.  The anti-Jewish riots in Palestine that led the British to cave to Arab pressure and shut off Jewish escape are well-known -- how many of us know they were funded by Hitler?  Winston Churchill protested the closing of Palestine to the Jews in the House of Commons, arguing against the appeasement of Nazi-funded Arab violence:

So far from being persecuted, the Arabs have crowded into the country and multiplied till their population has increased more than even all world Jewry could lift up the Jewish population. ... We are now asked to submit, and this is what rankles most with me, to an agitation which is fed with foreign money and ceaselessly inflamed by Nazi and by Fascist propaganda.

Who knows how many Jews would have escaped Hitler if the Jewish National Home in Palestine had remained open to them?
We do know that without the work of Hitler's allies, the Moslem Brothers, many signs indicate that Israel would have been a welcome neighbor in the Middle East, but this path was closed off by Moslem Brotherhood terrorism.  This is not "ancient history."  According to Prime Minister Netanyahu, Yasser Arafat (born Mohammed Al-Husseini, in Cairo) adopted the name Yasser to honor the Moslem Brothers' terror chief, who threw moderate Palestinians into pits of scorpions and snakes, eliminated the entire Nashashibi family of Jerusalem because they welcomed Jews into Palestine, and drove forty thousand Arabs into exile.  The corpses of their victims would be left in the street for days, shoes stuck in their mouths, as a lesson for any Arab who believed in tolerating a Jewish homeland.  Arafat as a member of the Moslem Brothers was directly trained by Nazi officers who were invited to Egypt after the fall of Hitler in Europe.
Like the pro-democracy demonstrators out in the streets of Cairo this week, immediately after World War I, Egypt was filled with hope for developing a modern, tolerant society.  The Egyptian revolution of 1919 united the country's Moslems, Christians, and Jews around the slogan "Liberty, Equality, Brotherhood."  The constitution of 1923 was completely secular, establishing a constitutional monarchy.  It took Western democracy as a model and worked for the equal status of women.  Jews were an accepted part of public life.  There were Jewish members of parliament.  The Zionist movement was accepted with "considerable sympathy," because the government's priority was to maintain good relations between the three most important religious groups -- Moslems, Jews, and Coptic Christians.  Today, the Jews are gone, and the Copts are viciously persecuted.  But in 1919, there was even an Egyptian section of the International Zionist Organization.  Its founder, Leon Castro, a Jew, was also the spokesman of the largest Egyptian political party, the Wafd, related to the largest opposition party taking part in this week's demonstrations.
When, in March 1928, the charismatic preacher Hassan al-Banna founded the Moslem Brotherhood in Egypt, it was a flop.  It promoted world domination by Islam and the restoration of the Caliphate, focusing on a complete subjugation of women.  In its first decade, the Moslem Brothers attracted only eight hundred members.
Then Hitler ascended to power.  A branch of the Nazi party was set up in Cairo.  The Egyptian government was told that if it did not begin to persecute their Jews, Germany would boycott Egyptian cotton.  When the government caved and began a press campaign and discriminatory measures against Jews, it was rewarded by Germany's becoming the second largest importer of Egyptian goods.  The Egyptian public was impressed by the propaganda about Germany's economic progress and impressive Nazi mass marches.  The pro-fascist Young Egypt movement was founded in 1933.  Abdel Nasser, later Egypt's most famous leader, remained loyal to Nazi ideology for the rest of his career.  During the war there was a popular street song in the Middle East: "Allah in heaven, Hitler on earth."
In the 1930s, the Third Reich poured men, money, weapons, and propaganda training into the Moslem Brotherhood.  It was the Reich that taught the fundamentalists to focus their anger on the Jews instead of on women.  By war's end, thanks entirely to Hitler's tutelage and direct support, the brotherhood had swelled to a million members, and Jew-hatred had become central to mainstream Arab culture.  Iranian Ayatollah Khomeini listened daily to the Nazi propaganda broadcast from Berlin by Moslem Brother Haj Amin al-Husseini.  So did every Arab with a radio, throughout the war, as it was the most popular programming in the Middle East.  Thanks to Hitler, the Moslem Brothers enshrined anti-Semitism as the main organizing force of Middle East politics for the next eighty years.
Egyptian society has lived in Hitler's world of hate ever since.  According to leading expert on the Third Reich's fusion with Islamism in Egypt Matthias Kunztel:

On this point (Jews), the entire Egyptian society has been Islamized.  In Egypt the ostracism and demonization of Jews is not a matter of debate, but a basic assumption of everyday discourse.  As if the Egyptian-Israeli peace treaty had never been signed, Israel and Israelis are today totally boycotted ... be it lawyers, journalists, doctors or artists...all Egyptian universities, sports associations, theatres and orchestras. ... If there is one theme in contemporary Egypt which unites Islamists, Liberals, Nasserites and Marxists, it is the collective fantasy of the common enemy in the shape of Israel and the Jews, which almost always correlates with the wish to destroy Israel.

In launching the Moslem Brothers' modern jihadi movement, Hitler did far more than enshrine anti-Semitism in the Middle East.  As if some kind of divine punishment, the creation of jihadism also sabotaged the move towards modernity and representative government, ruining hopes for freedom and prosperity for the Arab people.  The Brothers were the excuse for Mubarak's thirty years of emergency rule.  The Brothers were central to both the PLO and Hamas, killing all hope for peaceful coexistence and prosperity for the Palestinian people.  They had an early role in founding the Ba'ath Party in Syria and Iraq, turning those countries over to kleptocratic tyrants.  Moslem Brothers taught Osama bin Laden, and their philosophy is considered the foundational doctrine of al-Qaeda.
Will history repeat itself?  Or will the Egyptian people take back their country, throw off Hitler's long shadow, and begin again on the hopeful path to democracy and a decent life that they began at the beginning of the modern era?
|