Warning: mysqli_free_result() expects parameter 1 to be mysqli_result, bool given in /var/www/html/americanthinker/admin/common/functions/func.general.php on line 126
 The Occupied Territories Revisited: the Doctrine of Defensible Borders - American Thinker
|

The Occupied Territories Revisited: the Doctrine of Defensible Borders

By Harry Kanigel
It's a puzzle - isn't it? A a tiny state of a few million industrious souls is viewed as a truculent, sneering imperialist bully. Surely there's a story behind such a cognitive burr. Why would we dispute the morality of a nation that retains territory of high military value gained in a defensive war?

A state acting in lawful exercise of its right of self-defense may seize and occupy foreign territory as long as such seizure and occupation are necessary to its self-defense.

And then zeroes in on the nub of the matter:

Better title. It is a fact that, except for the Sinai Peninsula, each of the territories won by Israel in the 1967 Six-Day War -- the West Bank, the Gaza Strip, and portions of the Golan Heights -- were seized unlawfully by their prior occupiers, Jordan, Egypt and Syria respectively.
A short digression on the Sinai: The military and diplomatic parry-and-thrust in this desert region illustrates the principle of defensible borders as recognized by UN Resolution 242 that followed from the Six-Day War.  The resolution did not mandate that Israel withdraw to the prewar armistice lines, but rather that it was required to withdraw from  "territories" (and, quite intentionally, not "all" territories and not "the" territories) to "secure and recognized boundaries." These boundaries would certainly be different from the vulnerable armistice lines from which Israel had been attacked.  If Israel had annexed Sinai, it would have been arguably consistent with resolution 242:
The Sinai had been a staging area for a massive armored force, including 900 tanks, in the run-up to the Six-Day War.  To facilitate this mobilization, Egypt had expelled United Nations Emergency Forces (UNEF) from Sinai.  The build-up in the Sinai supported blockades of the Suez Canal and the Straits of Tiran, and menaced the Israeli port of Eilat.  In the aftermath of the Six-Day War, Israel made strategic defensive use of the captured Sinai to secure its southern frontier.  It established a sophisticated early-warning facility at Umm Khashiba in central Sinai.  Of course, a vast swath of desert was freed of a hostile military presence.  Israel enjoyed, for the only time in its history, some measure of what is known as "strategic depth,"  which equates roughly with the reasonable expectation to "live to fight another day" when surprised by a powerful first strike.  Certainly, vis-à-vis  Egypt, Israel now had "defensible borders."
The 1979 peace treaty between Israel and Egypt, which entailed the return of the Sinai -- a "peace for land" gambit, took a novel approach that substituted "security arrangements" for defensible borders.  Such security arrangements were made possible by distinctive features of the Egyptian-Israeli front, notably the low population density of the Sinai and its vast expanses with unobstructed views.  These conditions make it possible to enforce certain treaty provisions, by an independent, non-UN entity.  In the uncluttered landscape, far from everything, it was possible to monitor the forces (i.e. how many troops, what type of armaments, whether military or civilian police, etc.) belonging to each side, in each of several contiguous zones.  But no such favored set of topographical and demographic features exists in the West Bank, the Golan Heights or the Gaza.
To underscore the inherent softness of a peace that is dependent on transitory political conditions, it must be noted that Egypt has received ever more massive infusions of American cash every year since the 1979 treaty, which could be expected to incentivize compliance, but not necessarily deep resolve.  Further, reliance on an enforcement entity, the MFO (Multinational Force and Observers) creates a fragile dependency on a steady mission for such an organization, despite a changing cast of characters.  Lastly,  the security arrangements actually implemented were a pale version of what was envisioned by  Israelis who champion this school of thought; most disappointingly, the Umm Khashiba early warning station was decommissioned.
In any case, the Gaza, with its densely packed urban areas and location near Israeli population centers Ashkelon and Ashdod,  is not like the Sinai.  The current incarnation of the Gaza standoff stems from Israel's August 2005 withdrawal from this 140 square mile territory that runs along 25 miles of Mediterranean coastline. The Disengagement plan had been introduced in December '03 with high hopes; the death of Arafat and the ascension of his successor Mahmoud Abbas to Palestinian leadership seemed to signal new possibilities in Palestinian-Israeli relations.
The Disengagement Plan, which extended to five settlements in the West Bank, was put forth unilaterally (and by Prime Ministerial fiat) by the Israelis, and not as a product of a negotiated agreement with the Palestinian Authority.  Though Abbas endorsed the initiative, with earnest assurances of peaceful intent at the 2005 Sharm el-Sheikh summit, there was no quid pro quo offered to Israel in exchange for its concessions, which seemed to flow from the Second Intifada violence. Under the Gaza provisions of the plan, 21 civilian settlements were leveled, all security forces were removed and more than eight thousand Jews, most native Gazans, were expelled.  Synagogues were left standing as designated holy places but were promptly and enthusiastically destroyed by their new stewards.  Edifices that were more utilitarian, such as schools and hot houses, were similarly objects of impressive destruction.
The Disengagement went much further than the DOP (Declaration of Principles) of the Oslo Accords, which had affirmed Israel's responsibility for its citizens' security within the disputed territories and at border crossings.  In pitch-perfect response to the weakness exhibited by the Disengagement, hundreds of Kassam rockets and mortar shells were fired from the newly relinquished Gaza into Israeli towns and villages, notably Sderot, a once bustling working-class town that has been enfeebled by the constant shelling. 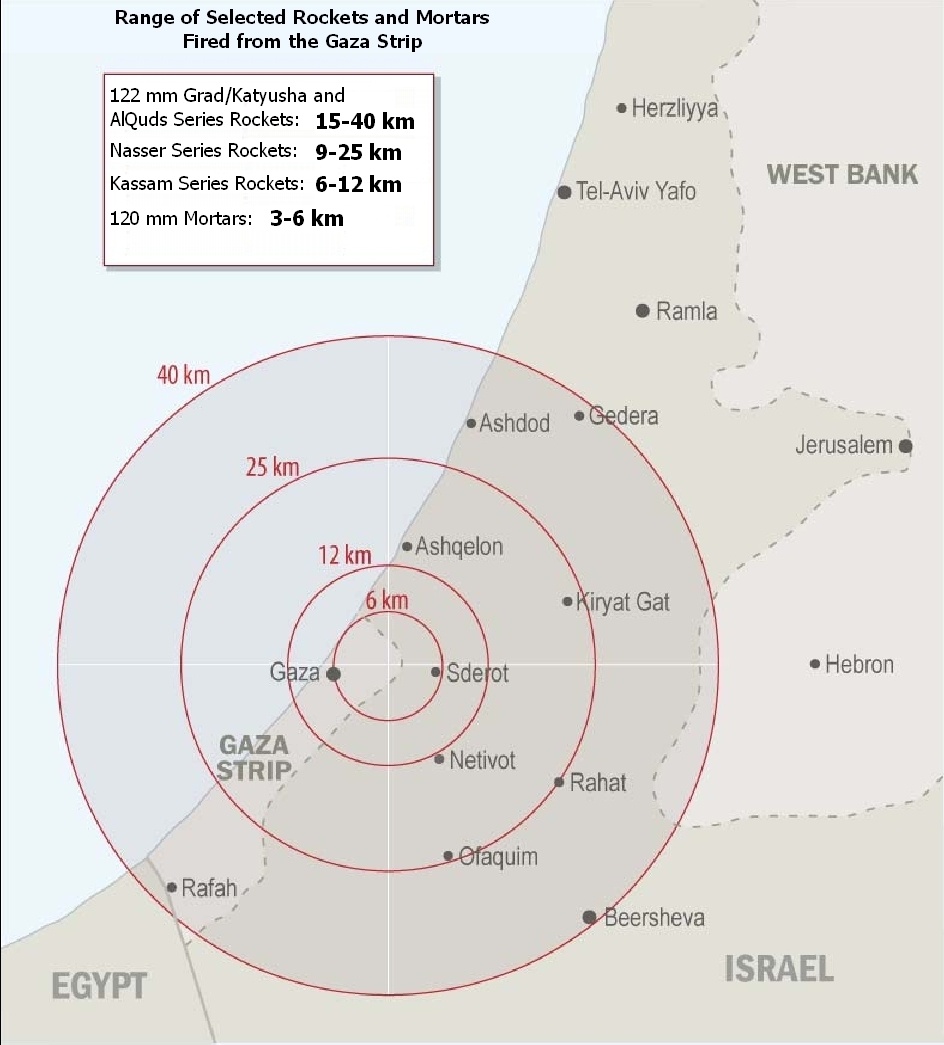 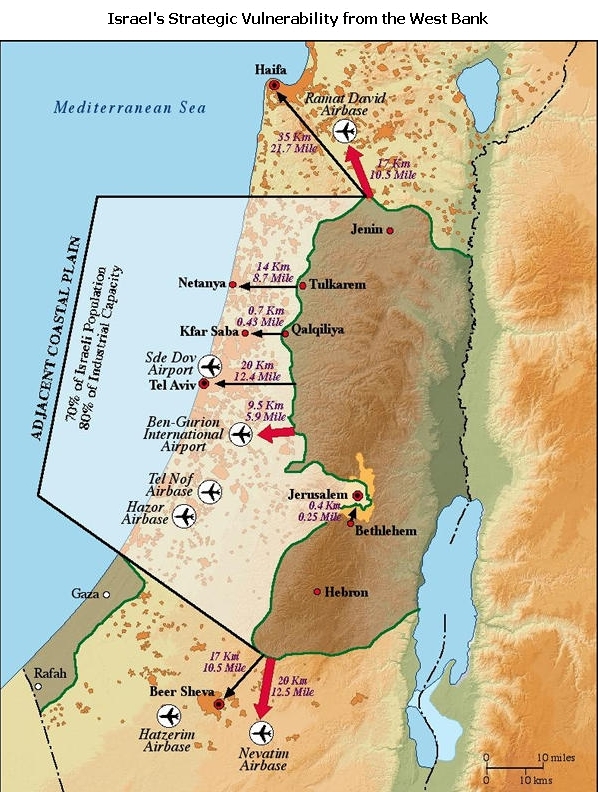 The coastal plain runs parallel to the ridge for a length of 116 miles (187 km) but is only nine to (roughly) twenty miles wide.  There are commanding positions aplenty along the 3,000-foot-high ridge that could be held for extended periods and which envisage a range of highly probable infernal scenarios.  Aircraft at Ben-Gurion Airport are exposed to fire from shoulder-launched anti-aircraft missiles that would, with a single stroke, cause great loss of life and incapacitate civil aviation indefinitely. Tel Aviv and Haifa are palpably menaced by the prospect of mortars, rockets, and surface-to-air missiles launched from the ridge. Israel's National Water Carrier, and its high-voltage electric power lines are obvious targets of destruction from positions along the ridge, as is the Trans-Israel Highway and other roads vital to troop movement and commerce.  In short, the flat plain that is the very heart of Israel would be exquisitely exposed to killing strikes from the West Bank hills if the 1949 Armistice lines were restored.
A key element of the Allon plan for defensible borders is a geological formation called the Jordan Rift Valley (JRV).  A rift valley is an elongated block-shaped depression of the earth's crust caused by tectonic activity, in this case, quite a few million years ago during the Miocene epoch. The JRV, a sub-section of the aptly named Great Rift that has wowed astronauts from space, runs from Syria to the Red Sea.  It happens that it traverses the eastern base of the West Bank mountain ridge where it couches the Jordan Valley at an elevation of  12-hundred  feet below sea-level, just a bit upriver from the lowest point on the surface of the earth. 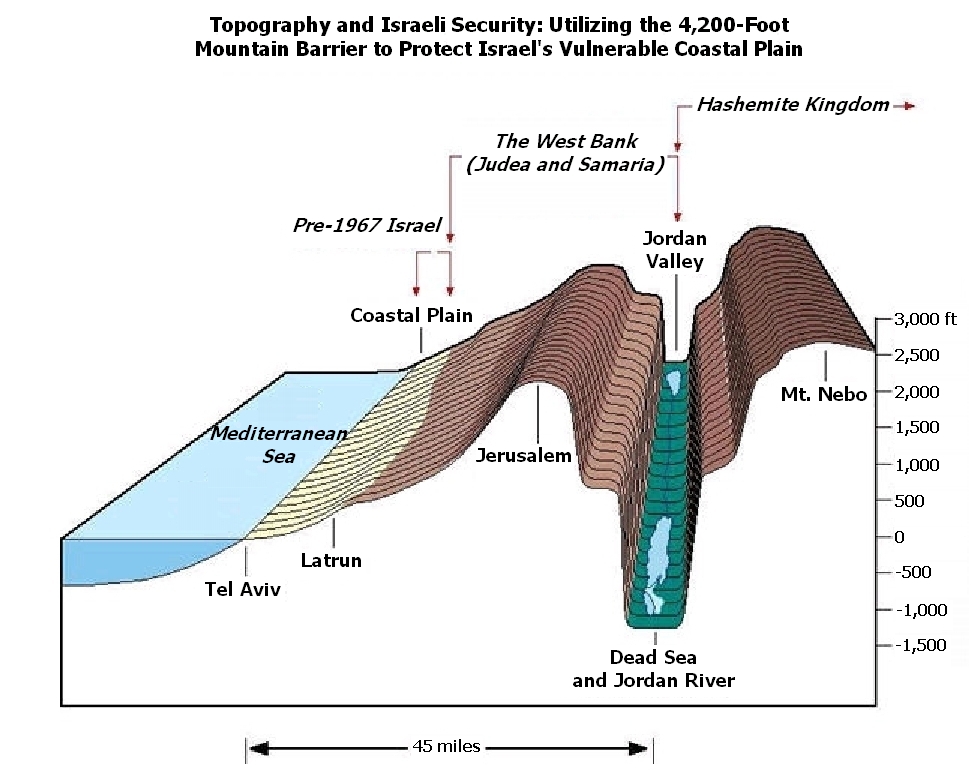 The Allon plan makes ingenious use of this topology.  First put forth in 1967 and later refined in the  October 1976 Foreign Affairs, the plan would have ceded most of the West Bank territory, along with its Arab population, to Jordan.  However, Israel would annex a 12-mile security belt comprising the topographically rugged Jordan Valley and the ridge above.  The plan envisions an artful use of the combined height of the ridge and the rift to achieve a 42-hundred-foot barrier that would defend against attackers from the east (Jordan) and retain positions that oversee the coastal plain to the west.  A reasonable extrapolation is that a neo-Allon plan would cede most of the West Bank to a new Palestinian state -- once again, retaining the ridge and Jordan Valley as a security zone annexed to Israel and re-establishing the Jordan River as the eastern frontier with Jordan. 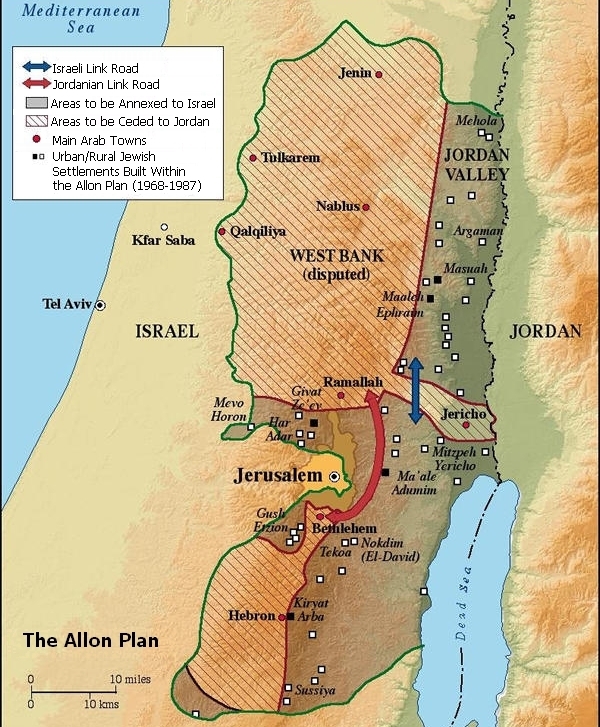 The above maps are also found at http://www.jewishvirtuallibrary.org/ which sources defensibleborders.org. They are published with the kind permission of Jerusalem Center for Public Affairs: http://www.jcpa.org/. Data based on reporting by Jane's Missiles and Rockets and Israeli government statements to international media outlets.