Warning: mysqli_free_result() expects parameter 1 to be mysqli_result, bool given in /var/www/html/americanthinker/admin/common/functions/func.general.php on line 126
 The Media, Reagan, and Obama - American Thinker
|

The Media, Reagan, and Obama

As we approach the 100th anniversary of the birth of Ronald Reagan, the former president has been in the news once again.  One way he has been used is to boost the image of Barack Obama.

Some presidents have been used to degrade the image of others.  Herbert Hoover was a convenient whipping boy to tar various Republicans through the years.  Nixon was the epitome of evil in the White House.  The fate of Ronald Reagan, on the other hand, has been a curious one.  The punditry that savaged him before, during, and after his years in office are now trying to burnish Barack Obama's image by comparing the two presidents.

This is just the latest gambit to try to boost the appeal of Barack Obama.  He has gone through  many image makeovers over the last couple of years.  He has been Lincolnesque (an image he  stoked by making his presidential announcement in Springfield), and then TIME Magazine morphed his image into the image of Franklin Delano Roosevelt, and now the latest incarnation in a sense compares him with Ronald Reagan.  They are paired together with a friendly Ronald Reagan placing his hand on the shoulder of Barack Obama. 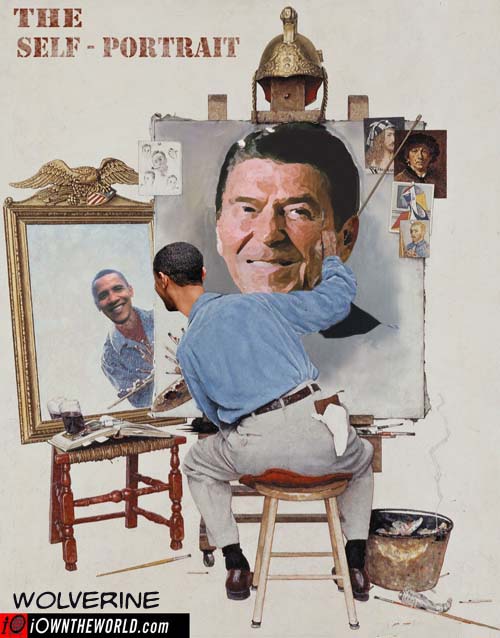 it, either.
He has all but counseled us to ignore Fox News and the internet, he has cast unjustified and blatantly false aspersions regarding foreign money and the Chamber of Commerce political ads that took him to task for his policies and performance, and he has called for less incendiary language in political discourse (this from the guy who can't take it but can sure dish it out -- as in "get in their face," "bring a gun to a knife fight," "fat cats," "sit in the back," "punish our enemies and reward our friends" --  that is some heated rhetoric for a Nobel Peace Prize winner).
The media spin job that Barack Obama is the second coming of Ronald Reagan -- that Ron and Barack would be pals, that Barack Obama can hold a candle to Ronald Reagan -- not only misses the mark, but willfully ignores how unfairly and disgracefully the media treated Ronald Reagan when he was alive.  To use him now that he is dead compounds the insult.
Ed Lasky is news editor of American Thinker.
|