By Norman Rogers
Can scientists become "Deadly Ninjas of Science Communication"?  That was proposed by Chris Mooney, author of The Republican War Against Science," and a member of the board of directors of the American Geophysical Union.  Mooney advocated this idea in a presentation at the Union's December 13-17 fall meeting in San Francisco.
Mooney is concerned that global warming skeptics are getting the upper hand in the ongoing debate.  Mooney has an unquestioning belief that disaster will overtake the world if we don't mend our CO2-emitting ways.  Many other speakers at the meeting, like Mooney, suggested that if scientists improved their communications skills, the skeptics could be defeated.
At the same fall meeting four years ago, Al Gore spoke to ten thousand assembled scientists.  The scientists treated him like a rock star.  Why would the scientists love Al Gore?  His movie, An Inconvenient Truth, was full of scientific errors.  But this is about not biting the hand that feeds you.  When Al Gore spreads global warming hysteria, financial and political support for climate science increases.  Scientists become guests on TV shows instead of lab drones.
But a dark cloud is gathering over climate science.  Public fear of global warming is declining.  Most of the activist scientists gathered in San Francisco were blind to the possibility that there is any defect in their scary product.  It must be that forces of darkness (perhaps Republicans or coal companies) are financing skeptics.  Apparently the skeptics, cleverly disguised as grassroots activists, have an uncanny knack for propaganda. 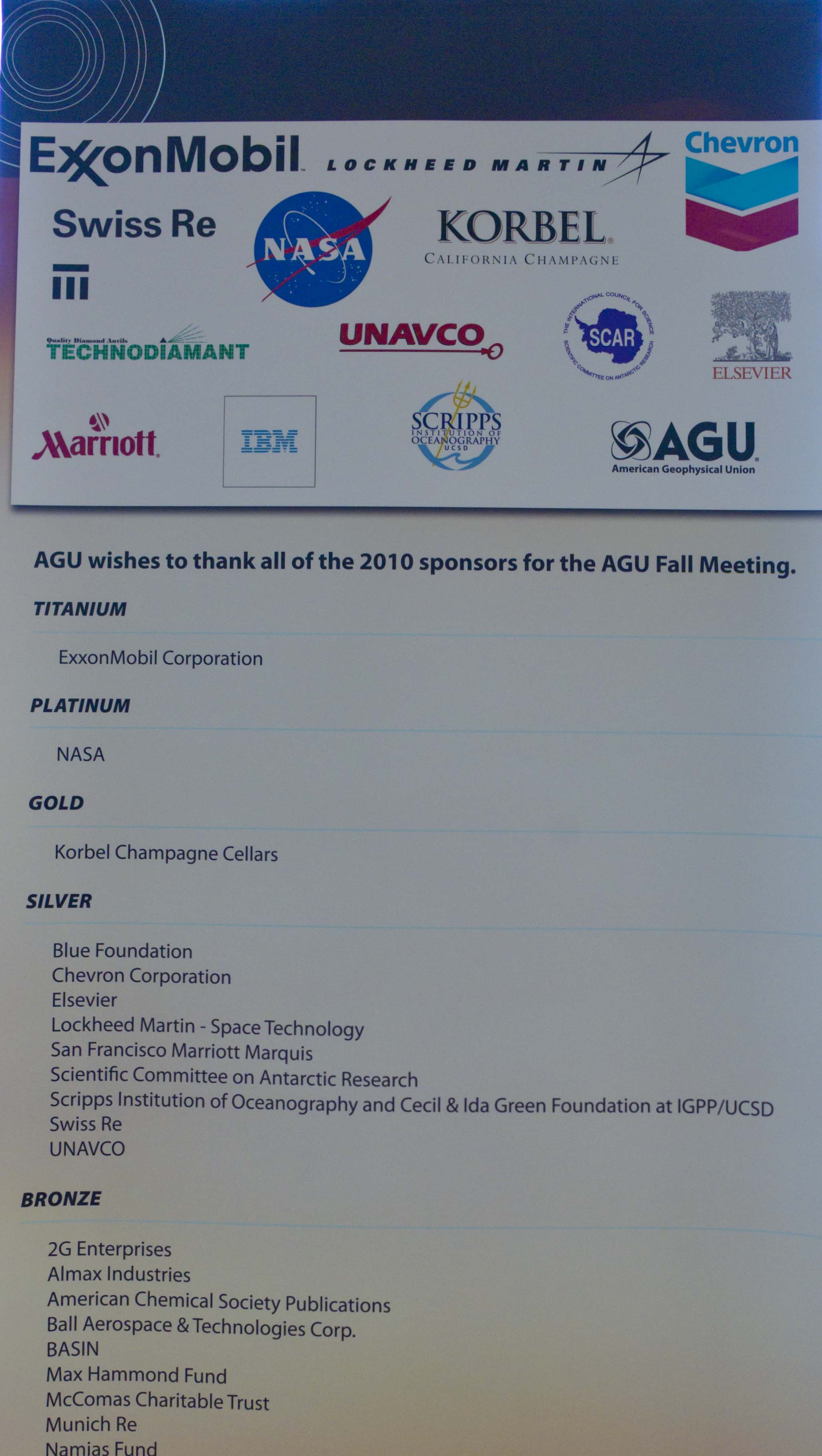 A few years ago, Exxon, a world-class provider of CO2 emissions, would have been top dog among the forces of darkness.  But now Exxon is the sole "titanium" sponsor of the meeting, ranked above the platinum, gold, silver, and bronze sponsors.  Apparently Exxon gave the Union so much money that they had to create a new category, and the logic of the nobility of the metals in the periodic table be damned.  Exxon purchased an indulgence from the church of global warming, probably at a price that is Exxon chump change.
Susan Hassol, a professional climate change communicator, gave the scientists in San Francisco a long list of words that scientists should never use when communicating with the public.  For example, to climate scientists, a positive feedback to global warming is bad, because a positive feedback would increase global warming.  But to the man in the street, a positive feedback is good, as when your boss gives you positive feedback.

One of the most famous propagandists of global warming, professor Michael Mann, gave a bitter presentation.  Mann is famous for creating the hockey stick curve, a graph that purported to show that the climate was stable for a thousand years until CO2 emissions in the 20th century made the temperature shoot up like the blade of a hockey stick.  The hockey stick graph went viral and was published everywhere as absolutely positive scientific proof of man-caused global warming.  A retired expert on mining, Steve McIntyre, working out of his modest Toronto house, thought the graph was suspicious and decided to investigate.  Amateur scientist McIntyre demolished the hockey stick, along with Mann's reputation.  Mann's presentation in San Francisco depicted him as a victim of dark forces.  Some of his slides included a picture of Sarah Palin in the upper-left corner, probably to galvanize the left-leaning audience.
Steve Easterbrook, a professor and software expert, reported on his investigation of computer climate models.  The entire edifice of global warming alarmism rests on a foundation of computer climate models used to make predictions about the future climate.  Easterbrook visited four different laboratories where models are created.  He basically said that these huge computer programs that have a million lines of computer code are kludges that would have to be completely rewritten to be up to modern software standards.  It would take fifty programmers working for twenty years at a cost of $350 million to rewrite one of these software dinosaurs.
However, there is little reason to suppose that if the models were rewritten, they would be much better.  As the brilliant and perhaps overly candid government scientist Kevin Trenberth said, "none of the climate states in the models correspond even remotely to the current observed climate. In particular, the state of the oceans, sea ice, and soil moisture has no relationship to the observed state at any recent time[.]"  It is an embarrassing fact that the major models disagree with each other by more than two-to-one about the magnitude of future global warming.
It was apparent that scientists have little experience with propaganda.  Rather than trying to do it themselves, they need to take a lesson from Al Gore and bring in the big guns from Hollywood and Madison Avenue.  Or maybe they should stick to science and stop trying to convince us that doom is around the corner unless we reconfigure the world economy to their specifications.
The author is a senior policy advisor at the Heartland Institute and maintains a website at www.climateviews.com.
|