Warning: mysqli_free_result() expects parameter 1 to be mysqli_result, bool given in /var/www/html/americanthinker/admin/common/functions/func.general.php on line 126
 Greenland Is Going to Be OK - American Thinker
|

Greenland Is Going to Be OK

By Norman Rogers
According to the government's Global Change Research Program, the oceans will rise three to four feet [i] by the year 2100.  Ice-covered Greenland is the top candidate to supply the water.  The big ice sheets in Antarctica are too cold, and the mountain glaciers aren't big enough to realistically add that much water to the oceans.
It became possible to get a good handle on the melting of Greenland only when the GRACE satellites were launched in 2002.  These satellites measure changes in the Earth's gravity and are able to measure changes in the mass of the Greenland ice sheet.

An ice sheet has a dynamic balance.  Snow falls on the ice, and as it stacks higher, that snow turns into more ice.  The great mass of ice, thousands of feet thick, flows like plastic toward the sea at a speed measured in feet per year.  At the edge of the Greenland ice sheet, the altitude is lower, and temperatures during the summer are high enough to melt ice.  Some of the ice melts, and the water runs into the sea.  The rest of the ice loss is from moving glaciers that drop icebergs into the sea.  Rising temperatures encourage faster flow and more melting, but rising temperatures also encourage more snow.  Warmth encourages snow as long as it doesn't get too warm. 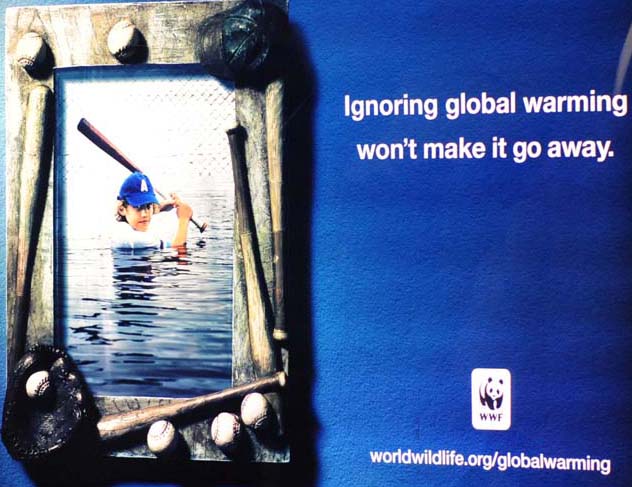 Since GRACE was launched in 2002, a number of scientific papers [ii] have given estimates of the loss of ice from the Greenland ice sheet.  The ice sheet is losing ice, but it is enough, if continued to 2100, to raise sea level only about one inch -- nothing close to three or four feet.  Further, there is no reason to suppose that the current rate of ice loss will continue.  It varies a lot from year to year, and we have only a few years of measurements.
There are other potential sources of sea level rise -- thermal expansion of the oceans and the mountain glaciers -- but to reach three or four feet, you need ice loss from Greenland.  To support the three- to four-foot prediction of sea level rise, the government cites three papers [iii], all highly speculative and not directly on topic.  All the papers are from Science.  Science is known as a strong promoter of man-caused global warming.
There is a school that tries to make responsible estimates of future ice loss.  The predictions are speculative because the methods used are not perfect and because future climate is itself speculative.  The predictions are usually done assuming future climate scenarios from the Intergovernmental Panel on Climate Change (IPCC).  The predictions of future climate generated by the IPCC are themselves highly speculative and influenced by political considerations.
The responsible school uses elaborate computer ice sheet models.  In 1995, the EPA estimated sea level rise to 2100 from global warming at thirteen inches using a model [iv].  The models analyze temperature, ice flow, and snowfall to follow the evolution of an ice sheet over time.  The model can be checked against the geological record of the past behavior of ice sheets as the ice ages waxed and waned.
The European scientists Philippe Huybrechts and Jan De Wolde in a 1999 paper [v] used elaborate ice sheet models to estimate sea level rise from major ice sheet shrinkage under three scenarios of global warming.  With the middle scenario, sea level rise from Greenland ice was estimated at 10.5 centimeters (four inches) by 2100.  However, it was projected that in Antarctica, the ice sheets would grow, not shrink, and that would reduce the world ocean rise to 7.5 centimeters, or 3 inches [vi].  To this it would be necessary to add an additional amount for thermal expansion [vii] of the ocean and melting of smaller mountain glaciers outside Greenland or Antarctica.  It's difficult to say how much more this would be -- perhaps four inches or even ten, giving a total rise of seven to thirteen inches compared to the government's three or four feet.  Keep in mind that all these projections are based on speculative global warming predictions.
According to tide gauges, the ocean has risen about seven inches [viii] during the last hundred years.  Al Gore, in his book An Inconvenient Truth, publishes flood maps based on an eighteen-foot rise in sea level.
An amusing speculative question is this: how bad would it be if the sea level did rise by three feet, or even by six or twelve feet?  As far as the United States is concerned, the threshold for really serious damage from sea level change is at the twelve-foot level, when the southern fifty miles of Florida would be endangered [ix].  But twelve feet of sea level rise would take a much warmer climate for perhaps five hundred years.  Is it important if south Florida is flooded in five hundred years?  Was Columbus worrying about nuclear war in 1492?  No -- it's a science fiction exercise to spend time worrying about something that might happen five hundred years in the future.
There is a mathematical approach that economists use to judge how much we should spend now in order to prevent damage in the future.  It's based on the idea of a discount rate.  For example, how much am I justified in paying you now in order that you give me a house worth $100,000 in thirty years?  If the discount rate, which is something like an interest rate, is 6%, then the answer is $15,000 [x].  If we try to answer the question "how much should we spend now to prevent the $4 trillion of Florida real estate from being destroyed in five hundred years?" and use a discount rate of 6%, the answer is...15 cents [xi]!  Economic theory is telling us that we can't control what may or may not happen in five hundred years.
So we can all relax and forget about sea level rise.  If it is ever going to happen, it's so far in the future that it's not worth worrying about.
The author is a senior policy advisor at the Heartland Institute.  He also maintains a website, climateviews.com.
[i] Global Climate Change Impacts in the United States, Thomas R. Karl, Jerry M. Melillo, and Thomas C. Peterson, (eds.). Cambridge University Press, 2009. Page 25.

[ii] For example: Grace observes small-scale mass loss in Greenland by B. Wouters, et. al. Geophysical Research Letters October 2008.
[iii] Citations to the papers are in reference (1) above
[iv] The EPA 1995 study: The Probability of Sea Level Rise (can be found online)
[v] "The Dynamic Response of the Greenland and Antarctic Ice Sheets to Multiple-Century Climatic Warming" by Philippe Huybrecchts and Jan De Wolde. Journal of Climate 1999 V. 12 P. 2169.
[vi] With the high scenario, it was six inches.
[vii] According to the IPCC, thermal expansion raised sea level by less than two inches from 1955-2003, during which time considerable warming took place (AR4 p. 415).  It takes far more energy to raise sea level by thermal expansion than by melting ice.  Only melting of Greenland or Antarctica can create a dangerous situation.
[viii] Interannual and interdecadal oscillation patterns in sea level, Unal and Ghil, Climate Dyanamics, 1995.
[ix] Of course, there are other places, like New Orleans, but the big one is south Florida.
[x] =100000*0.94^30 (Excel formula)
[xi] =4e12*0.94^500
|