By Clarice Feldman
Frances Fox Piven is a sociology professor who for four decades has advocated violent social upheaval as a means of effecting the radical change she believes in.  Her notion of appropriate change is quite obviously the displacement of the productive class and elected public leaders in favor of people like -- ahem -- herself.
This week, Glenn Beck called Piven out on her advocacy of violence.  In response, the New York Times, a group that has amusingly chosen to call itself the Center for Constitutional Rights, and the American Sociological Association have attacked Beck for daring to take her at her word.  Now, with Piven  exposed to a broader audience than usual as a firebrand who holds views dangerous to democratic life, her friends have dolled her up in widow's weeds  (her equally radical husband, Richard Cloward, died in  2001) and noted her age (78) to distract us from her work.
They want us to think, as did Psycho's Norman Bates channeling his long-dead mother, that "[t]hey'll  see and they'll know and they'll say, 'Why she wouldn't even harm a fly.'"

Stanley Kurtz at NRO; Ann Althouse, a law professor at the University of Wisconsin who has her own blog site; and the Wall Street Journal's James Taranto have taken the lead in this fight to expose Piven and her defenders.
In my opinion, they clearly have the better of it.
In the course of this brouhaha, it becomes apparent that leftist academics don't want to be and should not be taken seriously, that the cultural elite can dish out violent rhetoric but cannot take being called on it, that the NYT has blundered into another loser of an argument, and that people who want to waste their tuition money should major in sociology, which has obviously become the redoubt of clueless, revolutionary manqués.
Piven's battlefield was not the barricades, but rather a book she co-authored in 1977 and (twice now) the pages of The Nation, the magazine edited by a very wealthy woman who, along with  cloistered academics like Piven, somehow believes she speaks for the  dispossessed.
Piven and her husband took the first shot in a 1966 Nation article, "The Weight of the Poor: A Strategy to End Poverty."  In this work, the couple advocated using the poor to so completely swamp the welfare system with demands that it would shock the Democratic Party into enacting major reforms.  Some have argued that this tactic so overwhelmed New York City and the state of New York that it bankrupted them.
In the following years, the pair added to their notion of overwhelming local welfare services the notion of greatly increasing the number of poor voters by motor voter registration laws, which most certainly have facilitated fraud, including the voting by illegal aliens and others statutorily ineligible to vote.  In effect, Cloward and Piven moved the target of forcing overwhelming demands on the system from welfare offices to election bureaus, seriously disrupting the election process.
Here is a picture of Cloward and Piven with then-President Clinton at the signing of the Motor Voter law. 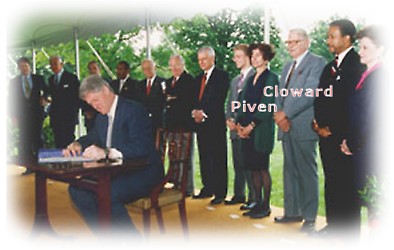 In 1977, she and her husband wrote a book, which Kurtz summarizes:

At the heart of the book, Cloward and Piven luxuriously describe instances of "mob looting," "rent riots," and similar disruptions, egged on especially by Communist-party organizers in the 1930s.  Many of those violent protests resulted in injuries.  A few led to deaths.  The central argument of Poor People's Movements is that it was not formal democratic activity but violent disruptions inspired by leftist organizers that forced the first great expansion of the welfare state.  Toward the end of the book, when Cloward and Piven describe their own work with the National Welfare Rights Organization, they treat the violent urban rioting of the Sixties as a positive force behind that era's expansion of the welfare state.

And there the ravings of Piven might have remained -- lost in the mists of history, her advocacy of concerted violently disruptive actions deliberately designed to make orderly democratic action harder, if not impossible, almost unknown to most of us.  Her unmistakable will to substitute her radical beliefs for the voters' more temperate ones and her chosen leaders for those democratically elected have not atrophied with old age, however.
On January 10, Piven authored yet another piece in The Nation, "Mobilizing the Jobless," which brought fresh scrutiny to her unremitting advocacy of radical, violent action.

Before people can mobilize for collective action, they have to develop a proud and angry identity and a set of claims that go with that identity. They have to go from being hurt and ashamed to being angry and indignant. . . .
An effective movement of the unemployed will have to look something like the strikes and riots that have spread across Greece in response to the austerity measures forced on the Greek government by the European Union, or like the student protests that recently spread with lightning speed across England in response to the prospect of greatly increased school fees.

As the strikes in Greece to which Piven referred were violent, she most certainly was advocating violence.  Here is a contemporary description of those riots:

Greece's fiscal crisis took a new turn to violence Wednesday when three people died in a firebomb attack amid a paralyzing national strike, while governments from Spain to the U.S. took steps to prevent the widening financial damage from hitting their own economies.[snip]
Greece's 24-hour nationwide general strike brought much of the country to a standstill, closing government offices and halting flights, trains and ferries.
At the same time, tens of thousands of protesters marched through Athens in the largest and most violent protests since the country's budget crisis began last fall. Angry youths rampaged through the center of Athens, torching several businesses and vehicles and smashing shop windows. Protesters and police clashed in front of parliament and fought running street battles around the city.
Witnesses said hooded protesters smashed the front window of Marfin Bank in central Athens and hurled a Molotov cocktail inside. The three victims died from asphyxiation from smoke inhalation, the Athens coroner's office said. Four others were seriously injured there, fire department officials said.

Nevertheless, since Piven is one of theirs -- a part of the leftist cultural elite -- both the NYT and the American Sociological Association tried to deny that she had advocated violence.  In addition, the group which labels itself Center for Constitutional Rights -- although clearly it is not for free speech -- announced that Fox should muzzle Glenn Beck because of his "Misinformation Campaign Against [the] Progressive Professor."
Piven denied to the NYT that she advocated violence in the article.  It's hard to see how that defense stands up, unless she is saying that she didn't know what happened in Greece when she urged the American unemployed to take action "like the strikes and riots" there.
And as Taranto reports, the NYT's effort to suggest that Piven herself became the target of threats as a result of anything Beck did is without evidentiary basis.  All Beck did was report the truth of what she said.
Professor Althouse reserved her strongest blows for the American Sociological Association, which was outraged that a prole like Beck dared to question Piven.  In analyzing the association's high-minded but foolish letter of "outrage" directed at Beck, Althouse wraps up the argument for never taking the calls for debate from that association seriously.  It's clear honest debate over their colleague's statements is the last thing they want:

So vigorous debate about Piven's ideas is really important, but it better be the right kind of debate by the right kind of people and most certainly not that terrible, terrible man Glenn Beck. She's very lofty and serious, so, while she should be challenged, she must be challenged only by lofty and serious individuals, and of course, Glenn Beck is not one. . . .
Does lofty, serious, intellectual sociology involve looking at evidence and analyzing it rationally? Linking the Tucson massacre to hot political rhetoric was a rash mistake made by demagogues - you want to talk about demagogues?! - demagogues who were slavering over the prospect of a right-wing massacre that would prove politically useful. . .
So Piven should not have called for "something like" Greek-style riots, and it was good of Glenn Beck to point out that Piven crossed the line, right? I mean, we're dedicating ourselves to serious, undistorted analysis here. That's what you said you wanted, didn't you?

Sociology does not enjoy an especially elevated reputation in the academy, and the American Sociological Association provides an object lesson in why that is. And these people can take anything except rational examination of their arguments.

In sum, this was another week in which the media and cultural elites acted stupidly and were called on it.  Twice in a row now they've tried to paint their opposition as violent thugs only to be revealed themselves as snobbish poseurs, projecting their own thuggish urges onto others.  It was another week in which those living off the productive labor of others deride those others, try to undermine them, and are in the process undermining the very society which  makes it possible for such foolish poseurs to live in comfort.
|