Warning: mysqli_free_result() expects parameter 1 to be mysqli_result, bool given in /var/www/html/americanthinker/admin/common/functions/func.general.php on line 126
 All Aboard for Gun Safety? - American Thinker
|

All Aboard for Gun Safety?

By Richard Kantro
From the New York City Department of the Absurd, Division of Performance Art, Bureau of Toys, comes a real-life poster currently displayed on subway cars rumbling through New York.  These things used to be called "public service announcements."  Lately, however, what with their cartoonish presentation, hypersimplified language, and bizarre messages both obvious and obtuse, I'm not sure what they are.  Whatever -- they're a far cry from the "Meet Miss Subways" profiles of the middle of the 20th century that were so much fun.  (Smile at them here, here, and here.)
No, the placard I saw yesterday showed two nice, big, real-looking handguns.  Except one was shiny and black, while the other was shiny and bright red.  The large-type teaser line read, "Which one is real?  Not the one you think." 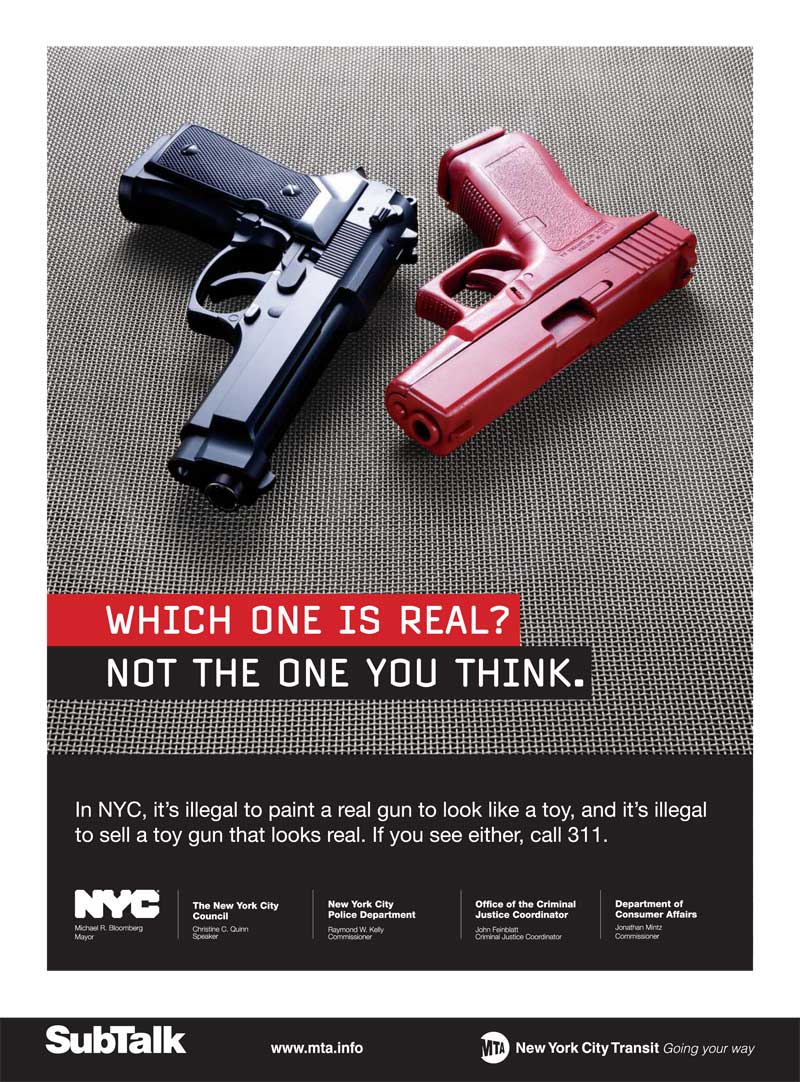 OK, this was supposed to occupy my mind for a half hour or so.  But I was only on that train for one quick local stop, so I had to think fast.  Hmmm, the black gun looks metallic, and the red gun is probably plastic, right?  After all, I've seen red water pistols, but never a red gun.  I made my choice, and decided to read on and buy the whole poke, since I already owned the pig.  (FYI:  "311" is the local, urban, all-purpose info hotline; see the NYC's own 311 statement here.)  The cryptic paragraph:

Honestly, it says that.  "If you see either."  Isn't the point that you can't tell the difference?  Who writes this stuff?  I can't be the only one befuddled by this advisory.  Just what is the message asking me, an average subway riding patron, to do?
If I see a gun I suspect is real, then I'm seeing a real gun, from my perspective of liking to live.  The counterintuitive thought -- that everything's OK because hey, it's probably just a toy -- is not uppermost in my mind, now is it?  And in NYC, if I see a non-official-someone with a non-concealed real gun, I get serious fast.
Now, I have three choices.  I can (i) talk the perp into handing it over, earning the Key to the City from the Mayor and a Grateful People, and then a felony charge of illegal possession, or (ii) disable him with surprise devastating force (ahem) and take the gun, earning the same charge and a lawsuit for violating his civil rights, or (iii) tell myself it's probably a toy, shift in my molded plastic seat, and go back to sleep.
Gotham wants me to choose (iv): make a mental note to call 311, when I get a chance, from the nonworking e. coli-equipped pay phone at the next station, or wait until I get back home, because there's no cellphone service Down Under.
Or let's say I see a hyperactive 11-year-old with a very-real-enough-looking gun -- I mean, I'm no firearms expert -- riding with mom and his five younger siblings.  She's awfully busy, and he's happily practicing the quick-draw, over and over, from the stroller-mounted holster.  And let's say the subway goes above ground, so I get a mobile phone signal.  And let's say I make no sudden moves, and reach 311, and manage to bypass the menu choices for school closings, pothole repair, slow snow removal, no-heat complaints, flu shots, where to get a birth certificate if I want to run for office, and missed-garbage pickups.  And I actually reach the gun-control desk at Consumer Affairs.  To err on the side of caution, they scramble to have a surprise waiting for the 11-year-old three stops ahead.
When the gun turns out to actually be a toy, they'll trace my cellphone.  And I'll get a bill for $19,571.82 for wasting the time of the nine-man SWAT team; for their supervising officers; for NYC police overtime; for mobilizing the gunpowder-sniffing hound K-9 division; the two standby ambulances; hazard pay for transit workers; and a fee for the 311 call transcript.  Not to mention the $1.25M lawsuit from a merchant -- and his landlord, and their insurers -- whose storefront two miles away got ransacked and trashed because my frivolous call drew down the usual police presence.  After all, shouldn't I have known the gun was a toy before I made that prank call?  Next time I'll just change cars.  (Story, "New York City Next To Charge Accident Tax", NU Online News Service, Dec. 10, 2010, here.)
Look, I guess it's just my fault for not following the latest trends in citizen protection.  After all, as New York City Administrative Code, Title 10 ‑‑ Public Safety, §10‑131, subsec. g. 1., subparas. (a)-(d) (enjoy the statute here) clearly states,

Got that?  Bright purple, or closed barrel?  Lemme see that gun, please.
Why is one exhorted to call 311 in an emergency?  Would you call the Department of Consumer Affairs in such circumstances?  Do they actually want you to?  Their own website's toy gun page here doesn't help much, full as it is of talk about harmful Halloween costumes and helping low-income New Yorkers with income-boosting tax credits.  And if the City of New York is serious, why don't our public servants urge you to call 911, ASAP?  Why a non-emergency, general-services, catch-all number?
Because maybe they're not serious.  One thing is for sure: the Second Amendment is practically lex non grata in New York City.  Politicians have been chipping away at it for decades.  And it's you who are the problem, not the perp with the piece.  In a story entitled "Bad Driver? In Debt? Proposed NYC Law Would Ban You From Owning a Gun" (Fox News, October 26, 2010; see story here), you find you'd have to be Mother Teresa redux to even think of applying for a gun permit:

New York City residents who want to own a gun may soon be denied permits if they are litterbugs, if they are bad drivers, or if they have fallen behind on a few bills.
Under proposed revisions to the police department's handgun, rifle and shotgun permit procedures, the NYPD can reject gun license applicants for a number of reasons, including:
If they have been arrested or convicted of almost any "violation," in any state; having a "poor driving history"; having been fired for "circumstances that demonstrate lack of good judgment"; having "failed to pay legally required debts"; being deemed to lack "good moral character"; or if any other information demonstrates "other good cause for the denial of the permit."
Critics say many of the restrictions are vague, have nothing to do with one's fitness to own a gun and are unconstitutional.

Wow.  And you thought Mayor Bloomberg's only concern was for your health, what with his mega‑lo‑salt mania.
The placard doesn't tell you what to do if you're sure you're seeing a real gun.  Or a toy one, which could be loaded.  And I don't know who's the biggest fool in all of this: the armed criminal, laughing all the way to the bank robbery; the legal concealed-carry permit-holder, already a critically endangered species in NYC; the outlawed toy-guns-r-us novelty purveyor; or his happy little customers.  Or maybe it's us, the average citizens, the target audience of the poster.  That would be for struggling to resist the erosion of our rights -- and of clear thinking -- at the municipal level as well as at the national.  And for having to accept that we're guided by the bureaucratic urban zombie brain-dead, and that this train is out of service.
Richard Kantro may be contacted at rk4at@hotmail.com.
|