Warning: mysqli_free_result() expects parameter 1 to be mysqli_result, bool given in /var/www/html/americanthinker/admin/common/functions/func.general.php on line 126
 A Priest and an Altar Boy, Hah, Ha, Ha - American Thinker
|

A Priest and an Altar Boy, Hah, Ha, Ha

This past June, Pope Benedict XVI said the church must promise "to do everything possible" to ensure that the sexual abuse of children by Catholic priests "will never occur again."

But the president of the Survivor Network of those Abused by Priests (SNAP) was not satisfied.  She said, "Right now, kids are being assaulted by priests and bishops are concealing the crimes.  And the pope continues taking no action to stop this."  She said that the pope still ignores the main problem: "the ongoing recklessness, deceit, and callousness of bishops who, even now, protect predators instead of children."
The executive director of the Women's Ordination Conference had an answer to the problem.  "We believe that if women had a say in the church, if there was more accountability and more transparency, [then] the men would have been held more accountable."
The issue of sexual abuse by Catholic priests is so commonplace that it is the subject of late-night "humor."

"I read this in the paper this morning: New York City has a priest shortage. So you see, there is some good news in the world. ... To give you an idea how bad it is, earlier today in Brooklyn an altar boy had to grope himself."
- David Letterman
"As you've probably heard, the Pope has asked all the Cardinals to return to Rome. You know how they got them all to come back? They told them that there was going to be a performance by the Vienna Boys Choir."
- Jay Leno
"The Cardinals will be staying at the Domus Sanctae Marthae, the new hotel at the Vatican, where turn down service means the bell boy isn't interested."
- "Daily Show" host Jon Stewart

Let me take you on a journey into reality.  (Remember this starting point.)
In 2004, the U.S. Department of Education reported on the results of academic studies into the prevalence of sexual abuse in Catholic schools.

As a group, these studies present a wide range of estimates of the percentage of U.S. students subject to sexual misconduct by school staff and vary from 3.7 to 50.3 percent.  Because of its carefully drawn sample and survey methodology, the AAUW report that nearly 9.6 percent of students are targets of educator sexual misconduct sometime during their school career presents the most accurate data available at this time.
Based on the assumption that the AAUW surveys accurately represent the experiences of all K-12 students, more than 4.5 million students are subject to sexual misconduct ... sometime between kindergarten and 12th grade.

The 15 cases GAO examined show that individuals with histories of sexual misconduct were hired or retained ... At least 11 of these 15 cases involve offenders who previously targeted children. Even more disturbing, in at least 6 cases, offenders used their new positions as school employees or volunteers to abuse more children.

We often hear how the Catholic priests and bishops excuse sexual offenders or merely pass them along from parish to parish.  The GAO confirmed such behavior.

A [school] compelled a teacher to resign after he accessed pornography on a school computer.  Although the school ... reported the abuse to child protective services, [an] administrator told another ... school seeking a reference that they would rehire the teacher "without reservation."  A second [school] also compelled him to resign, but his separation specifically directed all inquiries from future employers to the superintendent and agreed that he would provide a letter of recommendation.  This school ... also provided him with positive references.  He was eventually hired by a third [school], where he was convicted of sexually assaulting two students.

The GAO summarized the findings of the fifteen specific "cases of individuals with histories of sexual misconduct hired or retained."

In 10 of our 15 cases, school officials did not perform preemployment criminal history checks on prospective employees, including teachers, administrative staff, maintenance workers, volunteers, and contractors.  As a result, registered sex offenders were allowed to gain access to ... schools.  In 7 of these 10 cases, the offenders had been convicted for offenses against children and in at least 2 of the cases, they subsequently committed sexual crimes against children at the schools where they were working or volunteering.

In four of the cases we investigated, school officials allowed teachers who would have been subject to disciplinary action for sexual misconduct toward students to resign or otherwise separate from the school rather than face punishment.

That ends our little journey into reality.  (Remember this ending point.)
Now, I have a secret to tell you: everything in the above "journey into reality" (between the parenthetical starting and ending points) was about public schools, not Catholic ones.
The DoE report and the GAO report were real, but they were reporting primarily on public schools.  The 9.6% rate of "educator sexual misconduct" was based on surveys of public schools.  The estimate of 4.5 million children "subject to sexual misconduct" was based on those same surveys of public schools.
The quotes I used above did indeed come from those DoE and GAO reports.  I used brackets ([ ]) or ellipses (...) within the quotes only to disguise the identity of the schools or officials as public ones rather than Catholic ones.
In fact, the only false statements made in my "journey into reality" involved using the word "Catholic."  If you replace "Catholic" with "public" and replace the references to priests, bishops, and parishes with references to teachers, administrators, and school districts, the above journey accurately reflects the DoE and GAO reports.
The DoE report identified who the sexual offenders of schoolchildren are. 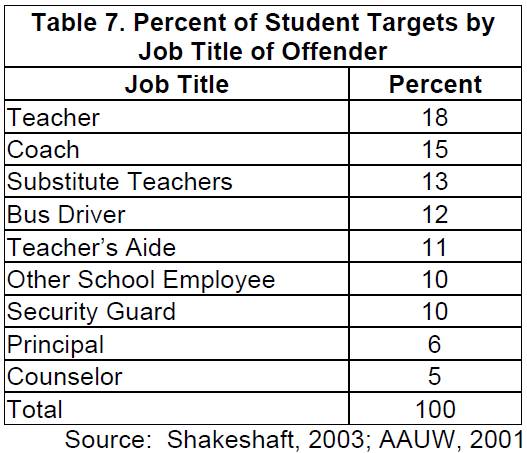 The U.S. Department of Education concluded that 4.5 million K-12 students are subjected to sexual misconduct from the types of people in the above list.  Do you find "priest" in that list?
Sexual misconduct occurs at some frequency in all types of power situations: teacher on student, parent on child, senior officer on enlisted, scout leader on scout, executive on intern, etc.  But there is no evidence that such a frequency is higher for priests.  Yet priests are virtually assumed guilty until proven innocent.
As usual, I see no attempt by people to get the facts.  We all just pile on like middle-school students and denigrate the kid who isn't currently popular.  For about two decades now, the unpopular kid is the priest -- all priests.  Make jokes about them.  Sue them.  Take their money.  Run Catholic parishes out of business and out of town.  Hah, hah, hah.
In the meantime, millions of kids are being sexually abused by their public school teachers, principals, counselors, and coaches.  And those public schools do little to weed out or punish the offenders; they often pass them along to other schools with positive job recommendations.  Where is the outrage about that?  Where are the jokes about that?  Is it only funny if the sexual offender wears a cleric's collar?
[Full disclosure: I am a lapsed Catholic, currently agnostic, who attended Catholic schools K-10.  Neither I nor anyone I knew in those schools was ever sexually approached, abused, molested, or mistreated in any way by any member of the clergy.  The nuns and priests who taught me took vows of celibacy, chastity, and poverty, and they received little pay and virtually nonexistent pensions.  However, they did make us memorize the times tables, do long division, and diagram sentences, none of which was very sexy for anyone involved.]
Randall Hoven can be contacted at randall.hoven@gmail.com or via his web site, randallhoven.com.
|