Thinking beyond the Deficit

By Andrew Foy, MD
There is bipartisan agreement across the country that the debt level is out of control. As a result of previous spending and future, unfunded obligations, America faces two outcomes if nothing is done. The first possible outcome is an acute national debt crisis if creditors decide to stop buying our debt. Overnight, government programs could literally come to a screeching halt forcing austerity measures that could spark social unrest and possibly much worse.
The second outcome is less drastic but no less worrying, and involves debasing our currency by printing money to pay for spending obligations; destroying existing wealth and permanently damaging our prospects for economic growth. In response to this potential threat the American people must get serious about deficit reduction and more importantly, recognize that not all deficit reduction solutions are created equal.
President Obama's bipartisan deficit commission presented a blueprint for reducing the deficit essentially by raising revenue through broadly lowering marginal tax rates and eliminating or reducing various credits and deductions. This nod to supply-side economics was viewed by some as the ultimate compromise: the Republicans would get a more friendly tax code, while the Democrats would get more money to spend. While the blueprint did propose to cap discretionary spending and modestly trim the biggest entitlement programs like Social Security, Medicare and Medicaid, it ultimately accepted the premise that the federal government should continue to do everything it does now. Under the commission's plan, federal spending and revenues as a share of the economy would both settle at 21% of gross domestic product (GDP). According to Tad DeHaven of the Cato Institute, the message from the blueprint was, "the big government we have is the big government we're going to keep."
Of course the commission's 11-8 vote for the blueprint was short of the 14 votes needed to send it to Congress, but it did succeed in encouraging a national debate. What we should expect in the coming weeks and months is for the majority of people to line up in favor of one of two solutions: primarily raising revenue as the deficit commission report does or primarily cutting spending.
The latter approach is by far superior, as dramatic reductions in government spending are likely needed if America is to return to vibrant economic growth. "Economic growth", writes Harvard economist Benjamin Friedman, "more often than not fosters greater opportunity, tolerance of diversity, social mobility, commitment to fairness, and dedication to democracy." According to President Obama,

Setting aside the moral arguments in support of constitutionally limited government, "optimum government theory" explains how the size and scope of government have important effects on economic growth and prosperity. In a study prepared for the Joint Economic Committee, Professors Richard Vedder and Lowell Gallaway explained,

The most basic function of government is the protection of people and property. This provides the necessary foundation for the efficient operation of a market economy. In addition, the governmental provision for a certain limited set of public services that the private sector cannot profitably provide enhances economic growth. However, as governments move beyond these core functions, they adversely affect economic growth due to multiple mechanisms that include:

The bottom line is that beyond an optimum level necessary for protecting people and property, government spending undermines economic growth by displacing private-sector activity. Governments are not as good as markets in adjusting to changing circumstances and finding innovative new ways of increasing the value of resources. The following figure depicts the relationship between government size and economic growth and is referred to as the Armey Curve. 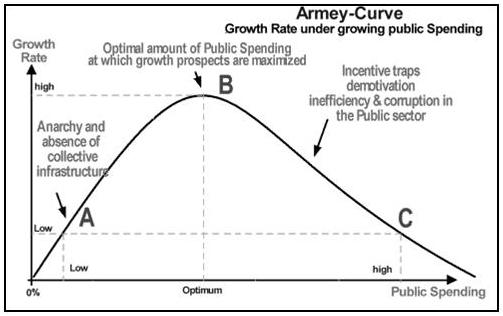 Vedder and Gallaway examined the relationship between the five-year economic growth rate and government spending in the United Sates and found with 99% certainty that over the time period 1796 to 1996, the total size of the federal government associated with the highest level of economic growth was 11.06% of GDP. According to the authors, $80 billion in federal spending [beyond the optimal level] has associated with it an output-reducing impact of about $34 billion. In other words, if President Obama is serious about economic growth and he truly believes it is the single most effective anti-poverty measure, as noted above, then he should be encouraging a debate on how to significantly decrease the size of government, not just reduce the deficit.
Unfortunately, the deficit commission's plan sought to cement federal spending at almost twice the optimum size of the federal government. Even worse, liberals including the President, continue to seek expansion in the size and scope of government, albeit with a renewed interest on deficit neutrality. In stark contrast, conservatives should highlight the ways federal programs, including the sacred cows of Social Security, Medicare and Medicaid, are undermining economic growth and then offer options to dramatically reform these items.
Social Security currently accounts for 19% of the federal budget. While many Americans have been duped into believing it represents a pension plan, it is really just a welfare program. Floyd Norris of the New York Times writes, "It is what it was when it was created in the Great Depression: a plan to tax working Americans to pay for benefits given to retired and disabled workers, and to their families." According to Jagadeesh Gokhale, a senior fellow at the Cato Institute,

"The provision of ever increasing economic security during retirement leads to lower personal and national saving, reduced work effort, and a dissolution of social structures (the family) that are conduits for transferring skills to the next generation -- overall, an erosion of economic growth promoting factors that would weaken the future economy."

Social Security disability benefits are particularly subject to subsidy seeking behavior. SSDI benefit payments have soared 119% since 1995. The long-term upward trend in real benefit payments highlights abuse of the system because advances in workplace safety and medical treatment should be lowering the number of career-ending injuries.
Medicare is another sacred cow that accounts for 13% of federal spending. Like its Social Security counterpart, the provision of ever increasing medical security in retirement leads to the same personal disincentives for beneficiaries. Furthermore, Medicare encourages rent seeking behavior as the program has become such a huge component of the health care system that private businesses such as device manufacturers and pharmaceutical companies have found it more profitable to divert public resources from the Medicare trust than to improve their productivity. We should not expect the perverse incentives of new programs created under ObamaCare to be any different.
Medicaid and other programs considered more typical "welfare" programs currently account for 16% of federal spending. The historical effects of these anti-poverty programs, as highlighted by Charles Murray in his benchmark work Losing Ground, have been dismal at best. These programs provide incredible incentives for beneficiaries to engage in subsidy seeking behavior. Worse yet, they undermine their beneficiary's sense of dignity and self-respect and encourage a victimization mentality that is prone to failure.
Recently, an unlikely and important political figure called for a major cutback in social-welfare benefits. In doing so, former Washington D.C. mayor Marion Barry denounced welfare as a program that created "a cycle of generational poverty, government dependency, and economic disparity." "We've been throwing money at poverty ever since Lyndon Johnson first declared war on poverty in 1965", writes Michael Tanner, senior fellow at the Cato Institute, "This year alone, federal welfare spending will exceed $600 billion, to fund 122 separate anti-poverty programs." But all these programs and money have done little to raise people out of poverty. Instead, as Barry pointed out, welfare "enslaves[s] residents in joblessness and dependency on the government rather than lifting them up and giving them an opportunity to achieve self-sufficiency."
Other non-defense discretionary spending accounts for 20% of federal outlays. Included in this category are the departments of Agriculture, Commerce, Education, Energy, and Homeland Security. In general, these departments encourage rent seeking and highlight the crowding out effect as spending in these areas could be put to better use in the private sector. Tad DeHaven points out that federal education spending per pupil, "has exploded by almost 200% since 1970. Yet test scores have remained essentially flat." Many of the programs financed by the Department of Agriculture were started during the Great Depression and are completely out of date. The Department of Commerce uses taxpayer dollars to unfairly subsidize businesses and fund local development projects. The department of Energy subsidizes fuel development and has a history of fiscal and environmental mismanagement.
The ethanol boondoggle serves to highlight how government is not as good as markets in adjusting to changing circumstances. Even Al Gore admitted that corn ethanol was a "mistake." According to Jerry Taylor and Peter Van Doren of the Cato Institute,

"The dizzying array of federal...subsidies, preferences and mandates for ethanol fuel are a sad reflection of how a mix of cynical politics and we-can-do-anything American naiveté can cloud minds and distort markets."

The final big ticket item on the federal budget is national defense, which currently accounts for 20% of federal spending. Given the government's primary constitutional role of protecting the American people it would be imprudent to take a hatchet here. That being said the American people should look critically at defense spending to answer the question ‘Is money being spent to protect Americans or is it being spent to protect commercial interests overseas?' The following figure depicts that over the last half-century defense spending, as a percent of total federal spending, has declined dramatically while spending in the other areas mentioned in this paper has risen. 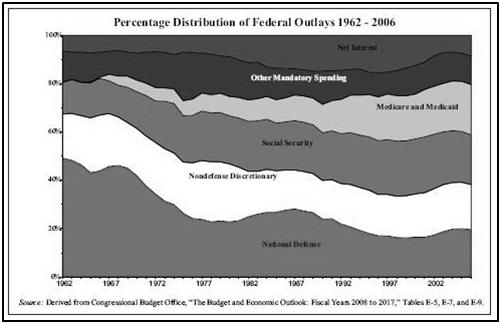 Clearly there is room to make dramatic reductions in the size and scope of government but first we must find the resolve to do so. At the very core of this debate -- at a level more fundamental than simply solving the deficit -- we must decide what kind of country we want to live in. If we choose to go the route of primarily raising revenue to satisfy the current requirements of government, then we are choosing a democratic social welfare state that will be characterized by economic stagnation, political corruption, and decreased opportunity and social mobility for current and future generations of Americans. If instead, we choose to primarily cut spending than we can revive the American economy again -- which has been, until recently, the biggest engine of economic growth and prosperity the world has known. Conservatives must assert that the big government we have is not the big government we need or should strive to keep.
Andrew Foy is a medical resident and author of the book You've Got to Stand for Something: Understanding and Restoring America's Founding Principles. He is also a contributor to Jonah Goldberg's new book Proud to be Right: Voices of the Next Conservative Generation. He can be contacted at Andrew.Foy@gmail.com.
|