Warning: mysqli_free_result() expects parameter 1 to be mysqli_result, bool given in /var/www/html/americanthinker/admin/common/functions/func.general.php on line 126
 The Winner of This Year's 'Best Climate Predictor' Award (Clue: It Wasn't Al Gore!) - American Thinker
|

By Howard Richman and Raymond Richman
Given the terrible beginning of winter in the U.S. and Europe this year, we ought to reward those who accurately predicted it and condemn those who got it wrong.  It's time to choose the winner of this year's "Best Climate Predictor" award.  There are five nominees:
Gore, Schwarzenegger, and the IPCC made their mark through their dramatic predictions of catastrophic sea level rise due to increased carbon dioxide in the atmosphere causing global warming.  Gore once predicted that sea levels would rise by twenty feet over the century.  Last year, Schwarzenegger unveiled a map showing world sea levels rising by 1.5 meters over the next century.  In 2001, the IPCC predicted that sea level would rise by three feet over the next century.  Their past predictions and the accurate satellite measurements are shown in the chart below: 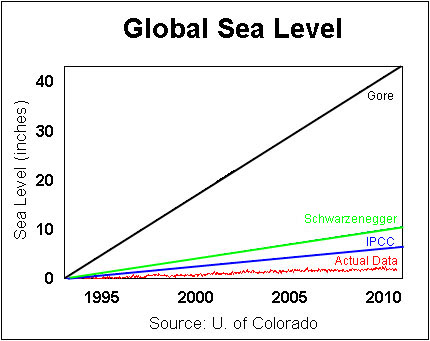 The actual sea level rise over the last eighteen years is 1.85 inches, which works out to 10.4 inches per century.  This is similar to the 20th century's rise of 8 inches, but much less than the average rise of 4 feet per century for the last 10,000 years as glaciers left by the last ice age continue to melt.
Gore's prediction is clearly the worst of these three, yet he was awarded a million-dollar Nobel Peace Prize for bringing this issue to the attention of the world.  Schwarzenegger's prediction comes in second-worst, yet he is angling for a global warming spokesman job in the Obama administration.  The IPCC's prediction is third-worst, yet it just won a huge expansion of the U.N. bureaucracy at the Cancun Climate Conference.
Piers Corbyn is the clear winner, yet he still works out of a drab office that the U.K. Daily Telegraph  calls "undistinguished":

[T]his is the third tough winter in a row. Is it really true that no one saw this coming?
Actually, they did. Allow me to introduce readers to Piers Corbyn, meteorologist and brother of my old chum, bearded leftie MP Jeremy. Piers Corbyn works in an undistinguished office in Borough High Street. He has no telescope or supercomputer. Armed only with a laptop, huge quantities of publicly available data and a first-class degree in astrophysics, he gets it right again and again.
Back in November, when the Met Office was still doing its "mild winter" schtick, Corbyn said it would be the coldest for 100 years. Indeed, it was back in May that he first predicted a snowy December, and he put his own money on a white Christmas about a month before the Met Office made any such forecast. He said that the Met Office would be wrong about last year's mythical "barbecue summer", and he was vindicated. He was closer to the truth about last winter, too. [...]
He seems to get it right about 85 per cent of the time and serious business people - notably in farming - are starting to invest in his forecasts. In the eyes of many punters, he puts the taxpayer-funded Met Office to shame. How on earth does he do it? He studies the Sun.

Corbyn, like many other astrophysicists, has figured out that climate change is mainly due to extraterrestrial forces, including solar activity and cosmic rays, not carbon dioxide.  If you still believe in the theory that carbon dioxide causes climate change, click here to watch an excellent lecture by Jasper Kirkby at the Cern, one of Europe's most highly respected centers for scientific research.  Astrophysicists have discovered that changes in the rate of cosmic ray inflow cause climate change and that solar activity shields the earth from cosmic rays.  They haven't completely worked out the mechanism yet, but they think it has to do with cosmic rays causing cloud formation and clouds reflecting sunlight back into space.
Who says that climate change will not be catastrophic?  Starting January 2, President Obama's EPA will start enforcing its new regulation that American industries use the "best available control technologies" to reduce carbon dioxide emissions.  This could increase American energy costs sufficiently to choke off our economic recovery.
And don't forget that at the conclusion of last year's climate conference in Copenhagen, President Obama negotiated the Copenhagen Accord with China, Brazil, South Africa, and India as a framework for future negotiations.  That accord lets China opt out from any verifiable requirements but commits the developed nations to paying out $100 billion per year to the U.N. and to the participating developing countries.  It states:

In the context of meaningful mitigation actions and transparency on implementation, developed countries commit to a goal of mobilizing jointly USD 100 billion dollars a year by 2020 to address the needs of developing countries. This funding will come from a wide variety of sources, public and private, bilateral and multilateral, including alternative sources of finance. New multilateral funding for adaptation will be delivered through effective and efficient fund arrangements, with a governance structure providing for equal representation of developed and developing countries. A significant portion of such funding should flow through the Copenhagen Green Climate Fund.

So who is the best climate predictor of the year?  Obviously, that honor goes to Piers Corbyn and his fellow astrophysicists.  Who is the worst?  Al Gore, followed closely by Gov. Schwarzenegger and the U.N.'s IPCC.  The last entrant's mischief-making has already cost the U.S. billion of dollars and brought Spain to the edge of bankruptcy, and it promises to make China the principal beneficiary of any further action.  President Obama and the U.S. Environmental Protection Agency appear determined to bankrupt the U.S. and send what remains of U.S. manufacturing to China.
The authors maintain a blog at www.idealtaxes.com, and co-authored the 2008 book Trading Away Our Future: How to Fix Our Government-Driven Trade Deficits and Faulty Tax System Before it's Too Late, published by Ideal Taxes Association.
|