Warning: mysqli_free_result() expects parameter 1 to be mysqli_result, bool given in /var/www/html/americanthinker/admin/common/functions/func.general.php on line 126
 Seeds of Financial Catastrophe - American Thinker
|

By Fred N. Sauer
Although our economy is still struggling to recover from what is now the longest recession since the Great Depression, the latter was a much greater catastrophe.  From 1929-1939, unemployment reached as high as 25%, industrial production dropped 46%, wholesale prices fell 32%, and foreign trade dropped 70%.
There is a general consensus about one of the most significant contributing factors to the financial crisis of the Great Depression:

In the nineteenth and early twentieth centuries, bankers and brokers were sometimes indistinguishable.  Then, in the Great Depression after 1929, Congress examined the mixing of the 'commercial' and 'investment' banking industries that occurred in the 1920s.  Hearings revealed conflicts of interest and fraud in some banking institutions' securities activities.

Commercial banks for the most part are lenders to persons and businesses whose borrowing requirements are too small to utilize public markets.  Commercial banks have to have detailed personal knowledge of their borrowers.  And they lend to local borrowers in their local communities.
Investment banks, on the other hand, tend to raise money for larger businesses from the sale of common and preferred stocks and longer-term corporate debt.  The criteria for borrowing in the public markets are more rigorous than those of local bank lending.  Therefore, it is much more expensive and complicated to qualify.  Investment banks also tend to make markets in the securities they issue or those already outstanding in the public market.  This is all done by brokerages, the buyers and sellers of public securities for private and institutional investors.
To remedy these problems, Congress passed a historic piece of legislation:

The second Glass-Steagall Act (the Banking Act of 1933) was a reaction to the collapse of a large portion of the American commercial banking system in early 1933.  It introduced the separation of bank types according to their business (commercial and investment banking), and it founded the Federal Deposit Insurance Corporation for insuring bank deposits.

The most important part of the Act was the creation of the Federal Deposit Insurance Corporation (FDIC).  This insured deposits placed in commercial banks from the risk of loss in the event of the failure of a commercial bank.  Depositors are in effect "lenders" to banks, which relend the deposits to other borrowers.  In the absence of such insurance, when the banking system started to collapse in 1933, depositors' funds were wiped out.  And so, the money supply shrank considerably.
In separating commercial banks from investment banks, Federal Deposit Insurance was not provided to investment banks, and for what used to be obvious reasons, commercial banks are considered less risky businesses than investment banks.  Therefore, all other things being equal, investment banks will always have to pay a higher rate of interest to borrow money than commercial banks have to pay their depositors.
When you open up your bank statement, whatever the amount of your balance, about 60%-80% of it has to be paid off with loans made to borrowers, while the rest is covered by required reserves and other sources of income.  Everyone with a positive balance on his bank statement is in fact an invisible partner to a business or individual who has borrowed money from the depositor's bank using the depositor's funds.  And as we said, bank loans historically have not been marketable because typical bank borrowers could not meet the market's qualifying criteria.
And so, commercial banks used to be experts in knowing their customers, knowing their collateral, and getting personal guarantees to provide their successful history of making unmarketable loans.  These then benefit the borrower, the depositors, and their stockholders.  And banks usually held these loans to maturity, and everyone involved lived with the consequences.

By 1970, something new popped up called Asset Securitization.  In this process, batches of similar loans are assembled so that they would look like a single larger loan with a composite of the individual loans' characteristics.  The larger loan could then be economically prepared for trading in public markets.  The Federal Government started to use this process to make mortgages for housing more affordable.

In February 1970, the U.S. Department of Housing and Urban Development created the transaction using a mortgage-backed security.  The Government National Mortgage Association (GNMA or Ginnie Mae) sold securities backed by a portfolio of mortgage loans.
In the case of Ginnie Mae securities, no matter what the quality of the individual mortgages in the pool amounted to, when the securities were combined into a single security issued by Ginnie Mae, their value was enhanced by the existence of the implied guarantee of the federal government (i.e., the United States taxpayer).  Through Ginnie Mae purchasing and securitizing pools of mortgages, banks could unload their portfolios of mortgages.  This would result in a further loss of accountability over the quality of the mortgages originated.  When commercial banks held mortgages to maturity, they were more careful about their quality.  In a short period of time, asset securitization allowed commercial banks to offload bad loans over which they otherwise had institutional responsibility to other investors and depositors.
Not surprisingly, banks started pooling together other types of bank loans for securitization:

... In 1985, securitization techniques that had been developed in the mortgage market were applied for the first time to a class of non-mortgage assets -- automobile loans.  A pool of assets second only to mortgages in volume, auto loans were a good match for structured finance; their maturities, considerably shorter than those of mortgages, made the timing of cash flows more predictable, and their long statistical histories of performance gave investors confidence ... .
The first significant bank credit card sale came to market in 1986 with a private placement of $50 million of outstanding bank card loans ... .  Sales of this type - with no contractual obligation by the seller to provide recourse - allowed banks to receive sales treatment for accounting and regulatory purposes (easing balance sheet and capital constraints), while at the same time allowing them to retain origination and servicing fees ... .
The first public Securitization of Community Reinvestment Act (CRA) loans started in 1997.  CRA loans are loans targeted to low and moderate income borrowers and neighborhoods. 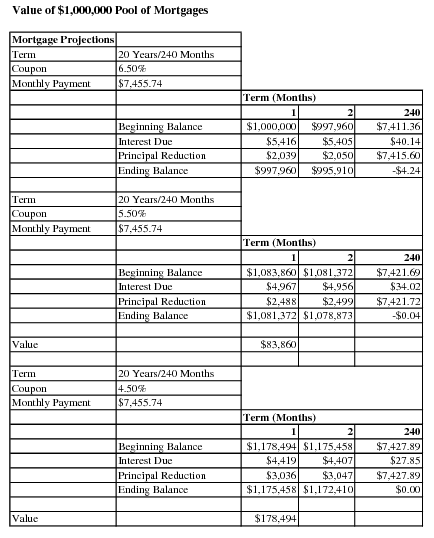 Accountability and responsibility declined as securitization increased, with everyone earning fees on originating and issuing securitized pools of almost anything.  Both the commercial banks and the investment banks love this environment.  They make a lot in fees and turn over their capital rapidly.  And each one of them wanted to get into each other's business.  Unfortunately for them, the Glass-Steagall Act stood in their way.  Then, in 1995, everything started to change, under the leadership of a former Goldman Sachs CEO:

Robert E. Rubin, secretary of the Treasury, recommended that Congress pass legislation to reform or repeal the Glass-Steagall Act of 1933 to modernize the country's financial system.  In testimony before the House Committee on Banking and Financial Services, Rubin said Clinton administration proposals would permit affiliations between banks and other financial services companies, such as securities firms and insurance companies... .
... Rubin said supporters of the act today say Glass-Steagall is necessary to protect the federal deposit insurance system.
'However,' said Rubin, 'the banking industry is fundamentally different from what it was two decades ago, let alone in 1933.'  He said the industry has been transformed into a global business of facilitating capital formation through diverse new products, services and markets.  ‘U.S. banks generally engage in a broader range of securities activities abroad than is permitted domestically,' said the Treasury secretary.  'Even domestically, the separation of investment banking and commercial banking envisioned by Glass-Steagall has eroded significantly.'
Rubin said Glass-Steagall imposed unnecessary costs and made providing financial services less efficient and more costly.  He said the act can 'conceivably impede safety and soundness by limiting revenue diversification.'

The recent financial crisis completely obliterated every intended meaning of this financial elite member's statement.  The repeal of the Glass-Steagall Act allowed Citicorp and Travelers Insurance Company to merge in 1998.  This merger ignited a wave of other commercial banks absorbing investment banks.  The amount of government aid to these banks and financial institutions, including aid provided by the Treasury Department through TARP and the Federal Reserve, aggregated over $1 trillion through 2009.  This and the near-collapse of Citigroup, and several other major financial institutions, demonstrate that the removal of the Glass-Steagall Act was a complete and utter catastrophe for America.  Nonetheless, the recently passed Dodd-Frank Wall Street Reform and Consumer Protection Act of 2010 does not come close to adequately addressing the issue.

Fred N. Sauer is an American patriot, St. Louis resident, and businessman whose blog can be found at www.americasculturalstudies.com.
|