Warning: mysqli_free_result() expects parameter 1 to be mysqli_result, bool given in /var/www/html/americanthinker/admin/common/functions/func.general.php on line 126
 The Socialism-Capitalism Science Experiment - American Thinker
|

It is apparent that a full 30% of the citizens of the U.S. are completely divorced from political reality. Much of this is due to the control progressives have had over the educational system, where American history has been revised or suppressed.  Major chunks of the early twentieth century have been buried to those under fifty years old, just as Nikita Khrushchev said he would bury us with his communism.

My wife and I just returned from spending a week in our daughter's Brooklyn apartment, dog-sitting for her and her avowed socialist boyfriend/fiancé while they vacationed in Orlando. Being from relatively rural Pennsylvania (where guns and Bibles are our security blankets), our daughter warned us not to wear anything that would identify us as conservatives, such as an American flag tee shirt. This, she said, would be dangerous and could provoke violence on the streets of her Brooklyn neighborhood.
I find it interesting that we have come to a point where a display of patriotism could inflame and incite violence from New York City leftists in the same vein as walking through a Muslim neighborhood wearing a caricature of Mohammed on a tee shirt would. However, on the same NYC streets, symbols of Che Guevara, anarchy, and communism are treated with respect. One angry-looking individual wore a tee shirt stating, "I'm an Atheist -- Deal with it!" OK, I will.
As I said, we spent the week in their apartment, which was decorated as a panoply of modern American socialist dogma. Posters declaring "Turn Off Fox News" and "Fight the Rise of the Right" were proudly displayed. Coffee table literature included American Socialist magazines and Noam Chomsky's Hopes and Prospects, a book decrying the existence of American exceptionalism, " ... which continues even under Obama!"
We have drifted way off course in this country. Socialism is becoming revered and capitalism reviled by many Americans, primarily due to the pervasiveness of leftist propaganda and the lack of historical perspective. How do we reverse this course and "take our country back"?
Despite the absence of accurate twentieth-century historical education, there are some ways the stark differences between the two economic philosophies can be presented...at least to those who have not been completely blinded to fact-based evidence. A perfect example of this is to present the evolution of the once-unified country of Korea as if it were a science experiment.
Imagine taking a country comprising a homogenous race of people who share the same culture and history and dividing it in half. On one half, the capitalist experiment is conducted. Free markets are created, and a democratic form of government is put in place. It is called "The Republic." On the other half, socialism is the economic system of choice, and a communist government is installed. It is known as "The Democratic People's Republic." (I believe this name was developed by the same folks who titled ObamaCare the "Patient Protection and Affordability Act.")
We take these two giant Petri dishes and allow them to incubate for sixty-five years. Upon observation, what do we find? As Don Oberdofer states in his book, The Two Koreas,

South of the dividing line, the Republic of Korea has developed since the 1970s into an economic powerhouse.  By 1977 it was the world's eleventh largest economy and one of the foremost producers of ships, automobiles, electronics, steel, and a host of other goods, with a per capita income of more than $10,000 per year.
[...] North of the dividing line, the Democratic People's Republic of Korea, which developed its own unique brand of communist Confucianism, remains militarily powerful but has lost the race in every other way ... Following the death of its founding leader in 1994, North Korea suffered a sharp economic decline, which was a central factor in a famine in outlying areas that led to massive loss of life.

Today, "The Republic" remains a vibrant economic force, one of the elite members of the G20, which just hosted the annual summit of world leaders. In 2010, its GDP growth will exceed that of the United States. Meanwhile, the citizens of "The Democratic People's Republic" wallow in abject poverty and starvation while their ruling class lives in supreme luxury.
In fact, the only thing that has kept most of the people in this socialist paradise alive is an illegal capitalistic black market, trading in food and goods that the government is unable or unwilling to provide. "If you don't trade, you die," one defector commented. Last November, a drastic devaluation of North Korea's currency was enacted to destroy this underground economy, resulting in government confiscation of the meager savings citizens had managed to set aside.
The question to pose is this: How do you explain the incomprehensible disparities in the quality of life between the two Koreas other than by the economic systems they chose and the consequences of those systems?
For those American socialists who have reading comprehension difficulties, I present a visual learning tool. Below is a picture taken of the two Koreas at night. Show this to any of the confused 30%, and ask them under which system they would like to live. 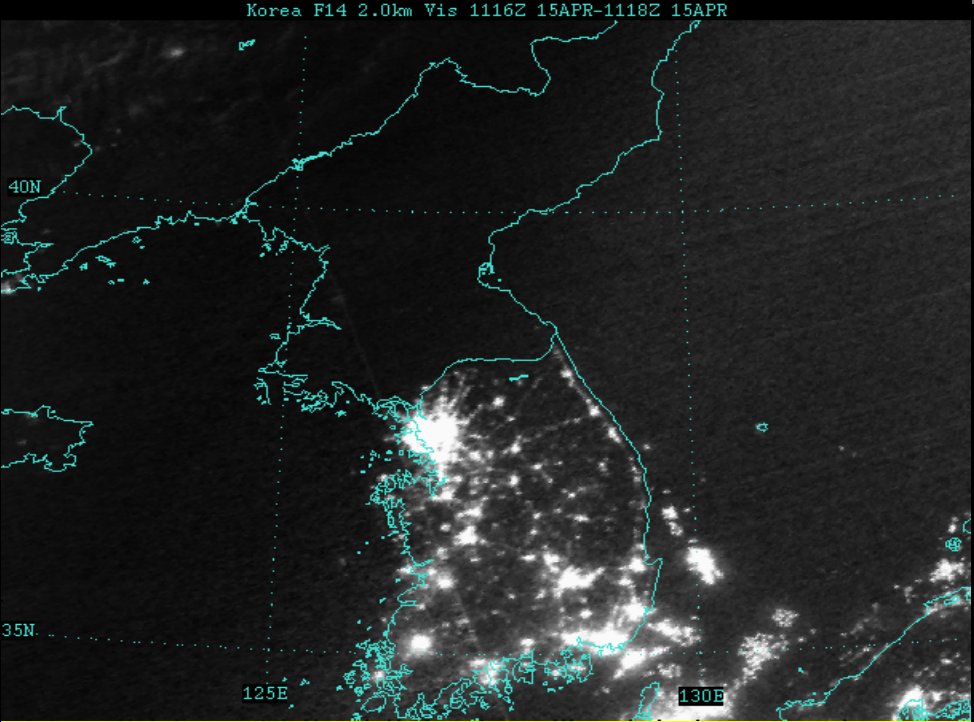 (photo from http://www.globalsecurity.org/military/world/dprk/dprk-dark.htm)
The rulers of North Korea, similar in attitude to American socialists, are violent and angry, and they want to destroy capitalist societies. This is because the existence itself of capitalism is a constant reminder that socialism has always been and always will be a fatally flawed failure. Continuing to educate others as to this truth is our best weapon in this epic struggle.
Andrew Thomas blogs at darkangelpolitics.com.
|