Warning: mysqli_free_result() expects parameter 1 to be mysqli_result, bool given in /var/www/html/americanthinker/admin/common/functions/func.general.php on line 126
 Soros's Next Target: Your State - American Thinker
|

Soros's Next Target: Your State

George Soros -- hedge fund billionaire, major funder of so-called 527 groups, early supporter of Barack Obama, and sugar daddy of the Democratic Party -- is one of America's most powerful political players. He had a bad November 2 when Republicans took control of the House. But he is not down for the count. He has already begun focusing on states as his next political playground -- where he wants to be the biggest bully on the block. 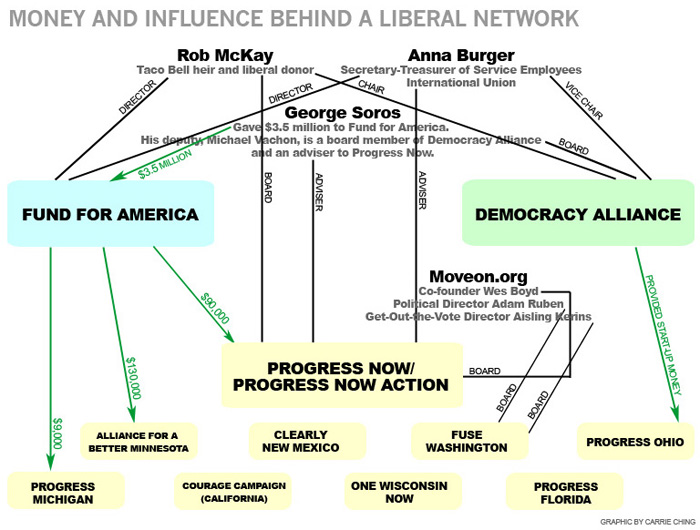 http://centerforinvestigativereporting.org/liberalnetworkchart
Alliance for a Better Minnesota was the so-called grassroots effort by Minnesotans that spread attacks against Norm Coleman. As can be graphically seen, it was an Astroturf group funded by wealthy donors who may be able to locate the Land of 10,000 Lakes on a map but otherwise have no ties to the state. While the amounts of money (and probably advice) may appear small, Soros and others among his allies can funnel money through other means.
Many states have looser restrictions regarding the amounts individuals, PACs, and other groups may donate to candidates. The monitoring and reporting of donations are much less rigorous than they are at the federal level. A lot of money can flow to candidates, and the citizens may remain completely in the dark regarding the sources and the amounts. In many ways, states are an ideal location for the type of mischief and scheming that Soros and his allies practice.
Of course, what the graphic also illustrates is that similar groups have been funded in various states. The plan has been franchised; tentacles have spread; the puppets are hooked. The groups are primed to take action when opportunities to advance the Soros agenda present themselves.
The action taken by MoveOn.Org to influence shale gas development in Pennsylvania is another manifestation of Soros and his allies operating at the state level. Why would a Soros-supported group that used to focus its campaigns against Republicans at the federal level shift course and focus on an individual state? (One clue: it may relate to Soros's energy investments.)
Will we see other Soros-controlled groups engage in steps to influence actions at the state level?
The Media: A Force Multiplier
These operations might be cloaked in secrecy, but they also depend on the media to magnify their efforts. Therefore, it is intriguing that Soros has recently invested more money in his media operations.
The National Public Radio grant that has been widely broadcast (at least by one network) will put two "journalists" in each state capital in America. Their stated role is to report on state governments and their actions. Do these journalists know who butters their bread? Will that affect their reporting? Does it even matter since NPR is chock full of liberals anyway who would likely support the Soros agenda?
Soros looks for emerging opportunities-talented hedge-fund operator that he is.
As the media -- particularly newspapers -- have fallen on hard times, they have reduced their coverage of the news and created an opening for Soros (and his allies, Herb and Marion Sandler, who have created their own "investigative group" to deliver news, free of charge, to cash-strapped media outlets -- "news" that seems agenda-driven).
One can envision scenarios where the news coming from state capitols will favor liberal causes and shine a positive light on politicians who would promote a Soros-based agenda. At the same time, those who oppose this agenda will be either ignored or attacked (Media Matters was recently generously funded by George Soros to engage in attacks against Fox News -- and this was before Glenn Beck's series on Soros).
Will the Soros-supported media honestly report on the goings-on in state capitols? Will journalists who know the ultimate source of their money promote certain ballot measures? We turn to this topic now as we continue to explore Soros-world.
Soros and the Ballots
George Soros has been promoting and paying for state ballot initiatives to put in place policies he favors.
While his marijuana legalization effort in California has now been publicized (and went down in flames), he has been trying to peddle the pro-pot line in states across the country for years. His efforts have "earned" him the sobriquet "Daddy Weedbucks" from the drug culture magazine Heads. He also tried to help drug dealers by pouring money into a Utah initiative that would have restricted the power of states to confiscate the property of busted drug dealers. He and his allies, by the way, have not given up on California -- they are gearing up to retool the proposition and get it passed in 2012.
But that is just one part of his agenda.
He also funded a 2004 effort in California for a proposition that would have softened and repealed some of the provisions of a Three Strikes initiative that imposes higher penalties on criminals who commit three felonies. The effort narrowly failed, but there is a postscript. George Soros finally agreed five years later to pay a fine to California's Fair Political Practices Commission for failing to properly disclose his $500,000 in donations made to promote this proposition.
He also has promoted Ohio's Minimum Wage Initiative (while there is a federal minimum wage law, states are free to pass their own higher wage laws).
Soros also funded a 2010 California ballot measure that would have put control of redistricting back in the hands of the state legislature (from a non-partisan group now) -- a move that would have obviously benefited Democrats. The effort failed. One may ask why Soros, who does not live in California, felt compelled to weigh in on that state's redistricting. Was it to earn "chits" from Democrats to be cashed in at some future date?
The Judicial Branch Should Bend to the Will of George Soros
There is more -- endless are the ways in which Soros seeks to influence actions on the state level. The state where Soros most recently tried to pull a fast one is Nevada -- another state where he has no residence. A November ballot measure was the first salvo in a nationwide campaign to end state judicial elections. The responsibility to pick judges would be taken away from voters and instead put in the hands of a nominating commission who would select a slate to present to the governor, who would then choose judges from the choices handed to him. The process is manipulated by bar associations (often left-wing) that fill the slate with left-wing judges.
The Wall Street Journal opined recently about this gambit:

That's a nifty outcome for liberal groups who see the state courts as the next frontier for moving political agendas. The Nevada initiative is part of a nationwide effort supported by George Soros, among others, to eliminate judicial elections in state courts. Through groups such as Justice at Stake, Mr. Soros's Open Society Institute has spent some $45 million on the cause nationwide, according to numbers tracked by the American Justice Partnership. Former Supreme Court Justice Sandra Day O'Connor has emerged as an unofficial spokesman for the effort, but the big money is coming from the political left. Nevada is viewed as a test drive....
Judicial elections aren't always pretty, but they do provide an important check on a branch of government that has itself become increasingly political. A system in which Governors can nominate anyone subject to legislative approval can also work, as it does for the federal courts.
But the worst system is to subcontract the third branch of government to a judicial elite who give elected officials little leeway. While parading as "merit" selections, these judges are political choices as much as any elected by voters.

Soros is not interested in checks and balances. He is interested in controlling as many levers of power in states that he can, and his guiding philosophy is that the ends justifies the means.
Clearly, his left-wing agenda can be furthered by promoting the careers of friendly politicians, including those who might occupy key positions in the power structure. These would include secretaries of state, who have the duty of ensuring the integrity of the voting process. Then legislators who feel beholden to Soros and his left-wing agenda can pass laws, or, even better, Soros and his minions can promote ballot measures that persuade people to vote for the policies Soros and his partners advocate. But laws are always subject to interpretation. Who interprets the law? Judges do.
What Is the Agenda of George Soros?
While concern has been focused on the Leviathan that the federal government has become, states still have a great deal of power in various areas. Would Soros pull some strings to have states pass Renewable Energy Standards that would help him profit from green energy investments (he has announced plans to invest one billion dollars in this clean energy)? Will state environmental protection agencies target carbon as the enemy?
Will cities and states continue to loosen voting standards?
George Soros has union allies, and his efforts are often linked to the actions of the Service Employees International Union. (Anna Burger was a senior official of the SEIU who recently resigned; as can be seen in the diagram above, she plays a key role in the Democracy Alliance.)
Will Soros use his sway to help out union allies via minimum wage and card check laws? Or will state officials engage in such trickery as was displayed recently in Michigan, where independent day care workers suddenly found themselves categorized as government employees and discovered, to their chagrin, they were also enrolled in a public-employee union? This was all due to the machinations of Democrats in Michigan who perpetrated a stealth attack on these workers to bolster union membership.
Will a state-influenced by George Soros and his allies be able to take a firm stance toward illegal immigration, or will states become de facto sanctuaries for illegal aliens? After all, Soros basically believes that there should be no borders.
Will states continue to file lawsuits against ObamaCare and resist its imposition?
The list of his past agendas goes on and on.
The modus operandi of George Soros has been the same for decades, whether playing with money or with politics. Find opportunities that have escaped most people's attention, exploit them, and gain wealth and power.
He has done it over and over, and he may very well be doing it in now in your very own state -- except it is not just your state, but also a state that Soros seems to consider his to own.
Ed Lasky is news editor of American Thinker.
|