Is the Federal Reserve Destroying the Dollar?

If you think our economy is in bad shape now, just wait. To be sure, economic prospects for jobs and growth already are bleak, and the Obama administration has increased the national debt in less than two years from over $10.632 trillion in January 2009 to $13.561 trillion in September 2010, resulting in a record 30% increase in public debt.

But fear not. Some of our brightest leaders have got the perfect solution to all these problems:

Charles Evans, president of the Federal Reserve Bank of Chicago, called for the Fed to do more to charge up the economy, including a new program of U.S. Treasury bond purchases and possibly a declaration that it wants inflation to rise for a time beyond its informal 2% target. ...
The Fed is now considering whether to add to its $2.3-trillion portfolio of securities and loans by ramping up purchases of U.S. Treasury bonds, in an effort to drive down long-term interest rates and boost growth. ...
The Fed also needs to push down "real" interest rates, nominal interest rates minus inflation, to induce households and businesses to part with savings and borrow and spend more, he said.

It is hard to accept that the head of the Chicago Federal Reserve Bank, or any other Federal Reserve Bank president, or Ben Bernanke, the head of the whole system, believes that by driving long-term interest rates lower than they already are (thirty-year U.S. Treasury Note near 4%), one can convince anyone, much less one half of Americans who did not go broke, to want to borrow enough money to accelerate this economy. It is a preposterous concept.
The most probable outcome will be to ignite inflation. The U.S. dollar is the top reserve currency in the world primarily because of its reliability for maintaining its value. When the Fed, the fiduciary custodian of the world's current top reserve currency, tells all the holders of the dollar that they are going to deliberately depreciate it at 2% to 4% a year, a whole lot of people are going to be listening very closely. It is a little like yelling "fire" in a movie theatre. You want to be first to get out of the door.
If you are holding a ten-year U.S. Treasury Note yielding 2% and the Fed assures you that inflation is going to increase by 2%, you have a potential problem. Any prospective buyer of your Treasury will want to make at least 4% to compensate him for the new inflation. Thus, he will not want to pay you as much for your ten-year U.S. Treasury Note as you paid for it. When you paid $1,000 for your ten-year U.S. Treasury Note, you got it with a 2% interest payment. Because your new buyer requires at least a 4% interest payment, he will pay you only $833 for your $1,000 bond. You will lose $167, or 16.7% on the transaction. If inflation increases by 4%, your bond will be worth only $696, and your loss will be $304, or 30.4%.
But the Fed cannot control everybody's reaction to their hoped-for 2% increase in inflation. What they are expecting to do is very imprecise. People's expectations about inflation may run ahead of actual inflation, with the result being that inflation becomes self-propelling. Commodities' futures go up immediately to anticipate future inflation. These future prices drive up current costs of raw materials, retailers pass it along quickly, and employees want wage increases, and thus, the dollar declines in value.
So both holders of financial instruments and price setters in the economy can cause more inflation just by racing to the door to get ahead of it. This race then causes accelerating drops in the prices of U.S. Treasury Securities held around the world. 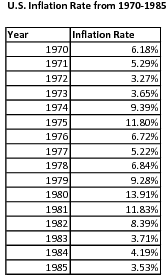 Chicago Fed President Charles Evans may have forgotten America's stagflation of the 1970s -- perhaps it is because he is only 52 years old. During a period when the domestic inflation exceeded 13% a year, the ten-year U.S. Treasury rate peaked at over 15%, and the Bank Prime Rate peaked at over 22%. Those who owed borrowed money during this period will never forget it.  And this vicious tax -- inflation -- battered every business and consumer in the American economy. It did not increase anybody's desire to expand the growth of the economy by borrowing more money.

Mr. Charles Evans "called for the Fed to do more to charge up the economy, including a new program of U.S. Treasury bond purchases[.]"
Buying bonds...a form of quantitative easing...has been nicknamed "QE2." It is "printing money."

Quantitative easing ... is accomplished by the Fed purchasing U.S. government debt with newly printed U.S. currency.  In essence, the Fed is monetizing the debt.

When the Federal Reserve announced in 2005 that they would cease publishing M3 statistics in March 2006, they explained that M3 did not convey any additional information about economic activity compared to M2 ... .

So what would M3 be today? For the 45 years ending 12/1/05, the M3 money supply grew at a compounded growth rate of 8.0%. If we extend this growth rate for the five-year period over which M3 has not been reported, we get an inferred value for M3 in 2010 of $14.919 trillion. But this is not all. Looking at the Fed balance sheet, we discover an extraordinary increase in "securities held outright" by the Fed. 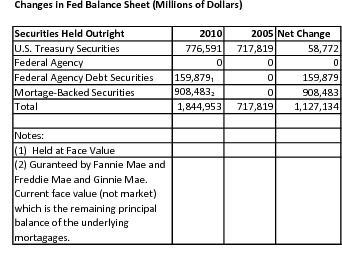 The Board of Governors and Open Market Committee are now dominated by President Obama's appointees and intellectual allies.  They know that their great experiment in spending stimulus has failed to spur a durable expansion, and so they are turning in unquiet desperation to the only tool they have left-monetary easing-to rescue their policy.  For them, the risks of slow growth and a 9% jobless rate going into 2012 are worse than the danger of asset bubbles or a new burst of inflation.

What if the largest foreign holder of over $800 billion of our Government Securities, the Chinese, decided to run for the door? This could result in an accelerated sale of a very large quantity of their U.S. Treasury Securities to escape their depreciation by inflation.
Let's listen to Dee Woo, who teaches economics in Beijing:

... Washington can't afford a weak-dollar policy-because the only thing standing between the U.S. and a Greek-style sovereign debt crisis is the dollar's status as the global currency.  A weaker dollar would threaten that status.  Within 20 years, according to the Congressional Budget Office, U.S. debt is projected to equal 140% of gross domestic product (GDP), and this doesn't even include the budget troubles of state governments.  In Greece, debt is a mere 115% of GDP.

And how could the Chinese profit from such a flash crash? They could float the yuan freely and perhaps realize a tremendous appreciation of it. Thereafter, they could start scooping up dollar denominated assets like those in America for dirt-cheap prices. America could be trapped with high interest rates, all foreign holders dumping our debt, a loss of the dollars status as a world reserve currency, and the crushing of our economy by hyperinflation. Such economic warfare would be a knockout punch against America. And then the Chinese could go on a shopping trip around the world to nations other than America, purchasing every kind of natural resource and other hard asset with their newly appreciated world-class yuan.
Every newly installed Socialist government has its first act: the massive printing of money to pay off all the loyal cohorts and followers and supporters. This assures support for the future "reelection" of the regime. The "$800-billion stimulus" bill and its successors have increased our domestic deficit by $3.0 trillion in the first two years, and proposed carbon taxes and government health care are all part of the script of destruction.
If you are a globalist socialist, the most effective way to destroy our economy and everyone's wealth is hyperinflation.
Fred N. Sauer is an American patriot, St. Louis resident, and businessman whose blog can be found at http://www.americasculturalstudies.com.
|