By Andrew Foy, MD
The argument continues in Washington over whether or not to extend the Bush tax cuts to Americans making over $250K per year. Besides maligning these earners as "the rich" and making the same tired appeal to identity politics, the Democrats' position is that extending tax cuts for this income class would leave hundreds of billions of dollars of unrealized taxable income on the table over the next decade. The Republicans' position is to block all tax increases, including those on high earners, so as not to hamper our fragile economic recovery. While this position has merit, it is receiving a lukewarm response from the public. Instead, Republicans who rode the tide of Tea Party sentiment into Washington should stand on first principles in opposing tax hikes on the minority at the behest of the majority by appealing to a sense of national unity as well as America's founding principles of "liberty and justice for all."
In The Federalist No. 10, Madison warned:

The apportionment of taxes on the various descriptions of property is an act which seems to require the most exact impartiality; yet, there is perhaps no legislative act in which greater opportunity and temptation are given to a predominant party, to trample on the rules of justice.

The preservation of justice requires that all citizens be treated equally under the law and protected from the arbitrary action of government. "To break the principle of equal treatment under the law," writes Friedrich Hayek, "inevitably opens the floodgates to arbitrariness." According to Thomas Sowell, "once you buy the argument that some segment of the citizenry should lose their rights, just because they are envied or resented you are putting your own rights in jeopardy -- quite aside from undermining any moral basis for respecting anybody's rights. You are opening the floodgates to arbitrary power. And once you open the floodgates, you can't tell the water where to go."
The most practical taxation policy consistent with the preservation of individual rights and equal justice is one where all citizens are taxed at the same percentage rate. However, the present debate revolves around raising taxes on one group, who already pay a higher tax rate, to spare another. Nothing could be more arbitrary. Therefore, Republicans should take control of this issue and force Democrats to acknowledge that if the deficit situation is so bad that it requires immediate action, then in the name of fairness and equal justice, one of three things must happen: government spending must be cut dramatically, taxes must be raised dramatically across the board, or we must employ some combination of the two -- but only if it involves across the board tax increases. Only then can the country begin to have a serious discussion on whether our current level of spending is justified. However, to allow spending to go on at its current level by paying for it on the backs of the minority is a slippery and dangerous slope -- one that almost assures that government spending will continue to spiral out of control with disastrous consequences.
In 2009, total federal and local government spending in the United States totaled $6,143.7B ($55K per worker), or 43% of GDP -- approximately 20% larger than most estimates of the optimum size of government, or the size of government that maximizes economic growth. As the figure shows, the size of the United States government has been growing consistently over the last seventy years, a trend that has spanned both Republican and Democrat regimes.
Figure 1. Total government spending (including Federal, State, and Local) as a percentage of GDP from 1909 - 2009 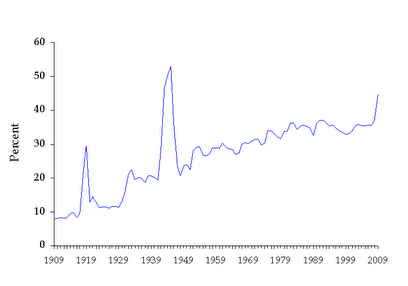 Overall government spending in the United States has not been this high, as a percentage of economic output, since World War Two. However, unlike that period where spending was driven by massive wartime outlays that decreased quickly after the war ended, the current spending is being driven by structural entitlement programs that show no prospects for decline.  How to address the problem of government spending in the face of ballooning federal deficits that threaten America's financial solvency will be the major policy issue over the next decade.
In response, we should expect the left to offer more of the same solutions -- to appeal to identify politics by advocating tax increases on "the rich," who will be continually redefined down in a fruitless quest to find more tax revenue as the great mass of citizens in society shrug. Republicans, on the other hand, should stand for America's constitutional principles of liberty and equality for all citizens as problems on the horizon undoubtedly test our nation's resolve. Whether we can go on as a constitutional republic or instead sink to the level of just another democratic social welfare state, where the rights of the individual are sacrificed to the whims of the majority, will depend on how we respond to this all-important fiscal policy issue. The Republicans must draw a line in the sand now based on first principles -- and not some naïvely wonkish appeal to imagined economic growth -- because the current debate over extending the Bush tax cuts is only a prelude to a much larger battle to come.
|