Warning: mysqli_free_result() expects parameter 1 to be mysqli_result, bool given in /var/www/html/americanthinker/admin/common/functions/func.general.php on line 126
 Waiting for 'Unionman' (to Go Away) - American Thinker
|

Waiting for 'Unionman' (to Go Away)

By Randy Fardal
In the week since the film Waiting for "Superman" hit New York and LA theaters, the public reaction seems to be coalesced in two opposing camps: school reformers praising it and unions panning it. The film showed that teachers' union bosses are blocking public school reform, so naturally, the unions have been blitzing the media, claiming that the film is inaccurate.
The union spokesmen might have valid arguments, since the film's director, Davis Guggenheim, also directed the AGW propaganda movie An Inconvenient Truth. A U.K. court ruled in 2007 that nine claims in Guggenheim's AGW movie were false, so this director does seem to have a history of playing loose with facts.
Still, there is at least one theme in the Superman film that merits further study: teacher quality. Randi Weingarten, president of the American Federation of Teachers, issued a written statement specifically about the film's treatment of it:

Are there bad teachers? Of course there are, just as there are bad accountants, and lawyers and actors. There also are countless good, great and exceptional teachers working in our public schools every day in neighborhoods across the country.

Her statement is, of course, absolutely correct -- there are many wonderful, dedicated teachers in America's public schools. But the film does not claim that no public school teacher is good; rather, it shows that Randi Weingarten's union blocks administrators from getting rid of those who are bad.
For instance, the film points out that other professions purge many times more per capita than the teaching profession does. The New York Times reported,

Waiting for 'Superman' is filled with disturbing statistics. In Illinois, where one in 57 doctors loses his medical license and one in 97 lawyers loses his law license, only one in 2,500 teachers loses his credentials, because of union rules. The film briefly visits a "rubber room" in New York City where idle teachers accused of misconduct wait months and sometimes years for hearings while drawing full salaries at an annual cost of $65 million.

If those statistics are accurate -- and so far, they have not been refuted -- then the teachers' union would seem to be lowering the overall quality of America's teachers by not culling the herd. Where is Darwin when you really need him?
By comparison, doctors are required to have two or three times as much college education as teachers, yet they are 44 times as likely to be purged from their profession. And how many more potential doctors are purged automatically during their undergraduate studies before they even apply for medical school?
One would expect that a professional organization would seek to improve the overall quality of its members. But the teachers' union is no silversmiths' guild of centuries past; instead, it is a collective bargaining union whose primary goal is to get above-market compensation for its dues-paying members. One tactic the union bosses use to reach that goal is to promote wage compression.
Teachers' unions build loyalty from bad teachers by paying them above-market salaries, as shown on the first chart. But since that leaves less for everyone else, it means that the good teachers are underpaid. By punishing good teachers, the unions actually encourage them to leave the profession -- precisely the opposite of what a professional organization should be doing.
Union bosses also want wage compression rather than fair merit pay because a free- 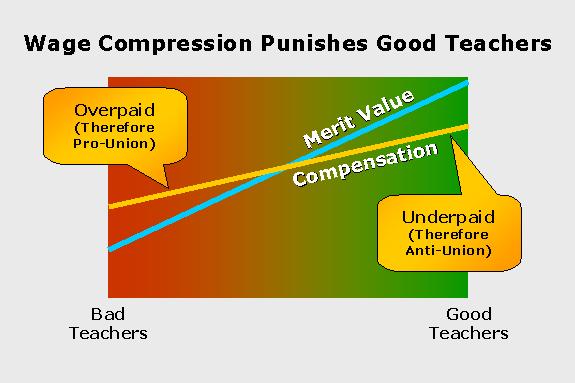 market compensation system would require no unions or union bosses: All of the good free-market teachers would become self-reliant and simply stop paying union dues. Likewise, all of the bad free-market teachers would leave the profession voluntarily, in search of better-paying jobs.
Conversely, if unions can purge good teachers, then a larger proportion of dependent, pro-union teachers remain -- which union bosses need when it comes time to re-certify the union or vote to increase dues. As shown on the second chart, union bosses achieve their voting majorities by 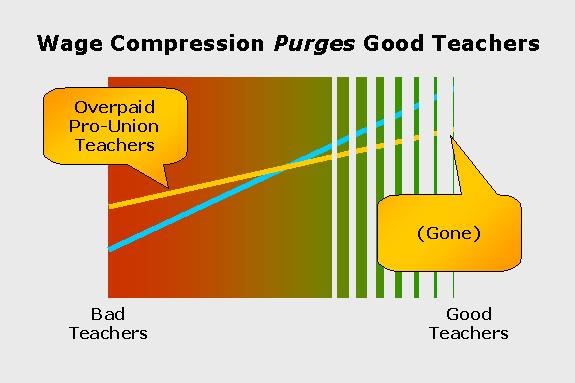 getting many of the good teachers to leave the profession. It's the same principle that Marxist governments employ: they purge (or murder) the best and brightest and shift wealth to the rest. Otherwise, there would be a revolt.
Inner-city teachers argue that their plight is so dire that any form of merit pay would punish them unfairly. It is true that those teachers endure heartbreaking externalities, such as uncaring parents and peer pressure among students not to excel because studying is "white." And Americans were shocked by a 2007 report that fewer than 25 percent of Detroit public school freshmen had graduated within the standard four years.
But suppose, for sake of comparison, that three-quarters of Detroit-made automobiles failed to meet NHTSA standards. Would auto executives excuse those results by claiming that their workers consider properly functioning vehicles to be too "white"? Of course not -- they would fix the problem. And which quality lapse causes more harm to society: a Chevy that gets 20 mpg rather than the advertised 25 mpg, or an illiterate Detroit high school dropout who robs liquor stores to finance his drug habit?
Granted, some disruptive kids are victims of five decades of Democrat social policies that removed fathers from families. Abused and neglected children tend to abuse and neglect their own children, producing a never-ending cycle. While it's not easy to break that cycle, such an effort is more likely to succeed in grade schools than in prisons, when it's too late. But that requires student and teacher accountability, which unions oppose.
If we continue to staff public schools with even a small portion of bad teachers and let them promote kids without proper testing, some students might cruise through twenty years in public schools, colleges, and law schools, only to find that they can barely pass the bar exam. One might even become president of the United States. Will the first real test of Mr. Obama's lifetime be a nuclear attack by Iran?
|